When Senator Dianne Feinstein of California, the top Democrat on the Judiciary Committee about to plunge into an election-season Supreme Court confirmation battle, was asked in the Capitol last week what her strategy would be for the coming fight, she walked by silently, an aide offering that she had a meeting to attend.

As Republican and Democratic senators have taken to television and arranged news conferences in recent days to lay out the stakes and merits of President Trump’s push to install Judge Amy Coney Barrett on the court, Ms. Feinstein has not been among them.

Her absence reflects the extent to which Ms. Feinstein, a trailblazing Senate eminence who has battled the C.I.A. and gun-rights activists, has become a diminished and increasingly marginalized figure in recent years. And it helps explain the private worry among many Democrats that the woman leading them into a nationally televised judicial knife fight with Republicans — one whose outcome could affect the election and tip the ideological balance of the Supreme Court — may not be up to the task.

At 87, Ms. Feinstein, the oldest member of the Senate, no longer walks through the Capitol without an aide at hand and rarely speaks off the cuff, eschewing national television interviews. Her statements to reporters can require after-the-fact corrections from staff members. Colleagues and Senate aides privately worry that she sometimes appears bewildered or disengaged.

Aging is far from a new problem for the Senate, where both parties reward seniority and are reluctant to push their elders aside. Ms. Feinstein’s allies insist she will play her role with dignity and force, and Democrats have quietly put in place plans to keep her at the periphery of the action, leaving public appearances to other party leaders and ensuring that she will rarely be called upon to make unscripted remarks. But rarely has someone with Ms. Feinstein’s limitations been asked to take so prominent a stage in a battle fraught with such political risk.

“What is different here is the heightened scrutiny and the fact, to a significant degree, that everything is on the line when it comes to this nomination,” said James P. Manley, who served as a senior aide to former Senator Harry Reid of Nevada, who as the majority leader had to manage an aging Robert C. Byrd as chairman of the Appropriations Committee. “The groups want blood. Democrats on and off the committee want a real fight.”

“The question I have,” Mr. Manley continued, “is whether that is going to be able to happen with her as the ranking member of the committee.”

This being the Senate, the hand-wringing has produced little by way of direct action so far. Out of respect, none of her colleagues would state their concerns on the record.

For her part, Ms. Feinstein hopes to use the hearings to reassure her colleagues she can still hold her own as the senior Democrat on the committee and be trusted to take the gavel as chairwoman if her party reclaims the majority next month. Ms. Feinstein is expected to hew closely to an opening statement prepared with staff, and leave any procedural brawling to lower-ranking Democrats.

Through an aide, she declined to be interviewed, but said in a statement that “Democrats are doing all we can to stop this headlong rush toward confirmation.”

“Protecting Americans health care and Justice Ginsburg’s legacy is a fight well worth having and we’re doing everything we can to show just how much is at stake,” she said.

But her critics on both ends of the political spectrum are circling in wait.

Progressive activists, many of whom argued that Ms. Feinstein badly botched the brutal 2018 confirmation process for Justice Brett M. Kavanaugh and the 2017 hearing on Judge Barrett’s confirmation to an appeals court, have warned that if she stumbles again, they are ready to outright push for her removal.

“This whole process has the potential to provide even further evidence of how Democrats ought to think about making a change in terms of who is running the committee,” said Brian Fallon, a founder of Demand Justice, a liberal advocacy group that lobbies Democrats to prioritize the federal courts.

Republicans, who believe Ms. Feinstein’s handling of the Kavanaugh hearings two years ago helped fire up their base and win them key Senate races, are eager to exploit any of her perceived missteps. 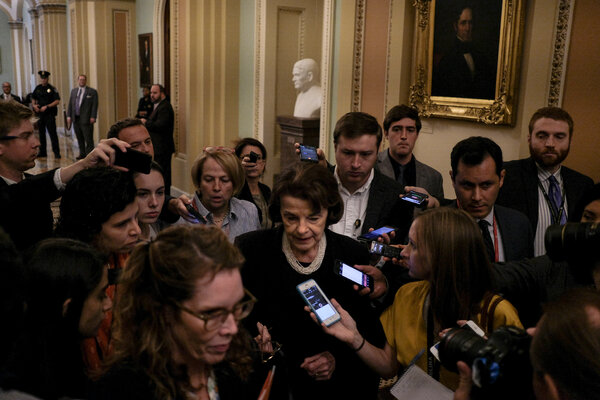 Ms. Feinstein found herself uncomfortably at the center of that proceeding after it became public that she had received and kept secret for weeks a letter from a California professor, Christine Blasey Ford, accusing Justice Kavanaugh of sexual assault decades earlier. When the letter finally came out, after Justice Kavanaugh’s initial confirmation hearings were already completed, members of both parties heaped criticism on Ms. Feinstein. Liberals said she had suppressed evidence that could have derailed Justice Kavanaugh’s nomination, and Republicans charged she had coordinated an 11th-hour attack to try to sink it.

Most troubling, said Meagan Hatcher-Mays, the director of democracy policy for Indivisible, a liberal grass-roots group, was that Ms. Feinstein “didn’t seem to have control over the situation at all.” But progressives were also angry about her genteel demeanor, an attribute of another era when the Senate was a more respectful, bipartisan place.

“She handled him with kid gloves,” Ms. Hatcher-Mays said. “She was, like, thanking him for being there. You don’t have to do that!”

Progressives worry that conciliatory approach could guide her hand as chairwoman if Democrats win back the Senate and former Vice President Joseph R. Biden Jr. is in the White House. With a record number of judicial appointments, Mr. Trump has succeeded in significantly pushing the balance of the nation’s courts to the right, and progressives believe realigning them must be a top priority.

“Dianne Feinstein is not somebody who inspires any confidence whatsoever that there will be sufficient attention on an issue that should be a priority of a President Biden,” Mr. Fallon said. “In fact, she will probably be an enabler and an accomplice to the obstruction efforts that created all of these vacancies for Trump to fill in the first place.”

Then there was Judge Barrett’s appeals court confirmation hearing in 2017. Democrats on the judiciary panel were noticeably skeptical of Judge Barrett’s Catholic faith, peppering her with questions about legal writings and personal statements they said raised doubts about her ability to rule objectively.

But it was Ms. Feinstein, who made the most pointed reference to Judge Barrett’s religion, saying, “In your case, Professor, when you read your speeches, the conclusion one draws is that the dogma lives loudly within you, and that’s of concern when you come to big issues that large numbers of people have fought for years in this country.”

This time, Senate Democrats have taken some steps to keep Ms. Feinstein on the periphery as much as possible. Senator Chuck Schumer of New York, the minority leader, has made himself the face of the opposition to Judge Barrett with a barrage of news conferences, television interviews and appearances on the Senate floor. His top deputy, Senator Richard J. Durbin of Illinois, a senior member on the committee, recently left progressive activists he addressed with the clear impression he was prepared to play an outsize role shaping the party’s message in the hearings.

After Politico published an article last month citing three unnamed Senate Democrats questioning whether Ms. Feinstein was capable of continuing in her role, Democrats on the committee have stressed they will work as a team. And her defenders say critics confuse Ms. Feinstein’s patrician gentility for senility.

“Senator Feinstein has a very identifiable character and nature, and it’s not really in that nature to be tangling with an obstreperous Lindsey Graham for instance,” said Senator Sheldon Whitehouse, Democrat of Rhode Island, referring to the committee’s Republican chairman. “But she brings a perspective, a dignity, a long history of bipartisanship, good will and an exemplary record on issues involving women, which are particularly germane here.”

Ms. Feinstein’s decline is far from the worst the Senate has seen in recent years. Strom Thurmond of South Carolina, who served past the age of 100, was barely verbal and living at Walter Reed National Military Medical Center during his final years in the Senate, where an aide wheeled him around in a wheelchair. More recently, Thad Cochran of Mississippi continued to serve as chairman of the Appropriations Committee even when he was so disoriented that aides had to walk him onto the Senate floor and instruct him how to vote.

Ms. Feinstein still walks the Senate floor alone, cheerfully interacts with colleagues and occasionally gives speeches there. She can also point to her victory in 2018, when her age and moderate profile became an issue, as a mandate to continue at work.

Still, inside the Capitol, where reporters typically swarm senators coming and going from votes, Ms. Feinstein is often given wide berth these days by would-be questioners who have learned to expect occasional misstatements or outright confusion that her office must later clarify in writing.

She has sometimes had trouble understanding questions directed toward her. When a reporter approached Ms. Feinstein last month to ask if she supported expanding the size of the Supreme Court, a debate raging among Democrats after the death of Justice Ruth Bader Ginsburg, Ms. Feinstein paused. “Pardon me?” she said.

An aide interjected, serving up an easy out for his boss: “We have to have the majority before we get there.”

“Yeah, ask me when we win the majority,” she said before walking away.