WASHINGTON — President Biden’s carefully worded statement on Monday supporting a cease-fire between Israelis and Palestinians came amid growing pressure within his own party for the United States to take a more skeptical stance toward one of its closest allies.

Mr. Biden’s urging of a halt to the fighting — tucked at the end of a summary of a call with Prime Minister Benjamin Netanyahu of Israel — followed a drumbeat of calls from Democratic lawmakers across the ideological spectrum for his administration to speak out firmly against the escalation of violence. It reflected a different tone than the one members of Congress have sounded during past clashes in the region, when most Democrats have repeated their strong backing for Israel’s right to defend itself and called for peace, without openly criticizing its actions.

The push is strongest from the energized progressive wing of the party, whose representatives in the House, like Alexandria Ocasio-Cortez of New York, have drawn attention in recent days for accusing Israel of gross human rights violations against Palestinians and of operating an “apartheid state.” But their intensity has obscured a quieter, concerted shift among more mainstream Democrats that could ultimately be more consequential.

Though they have no intention of ending the United States’ close alliance with Israel, a growing number of Democrats in Washington say they are no longer willing to give the country a pass for its harsh treatment of the Palestinians and the spasms of violence that have defined the conflict for years.

Underscoring how skepticism around the campaign in Gaza had spread to even some of Israel’s strongest defenders in Congress, Representative Gregory W. Meeks of New York, the chairman of the Foreign Affairs Committee, told Democrats on the panel on Monday that he would ask the Biden administration to delay a $735 million tranche of precision-guided weapons to Israel that had been approved before tensions in the Middle East boiled over.

Mr. Meeks, a fixture at the annual conference of the American Israel Public Affairs Committee, or AIPAC, the most powerful pro-Israel lobbying group, convened an emergency meeting of Foreign Affairs Committee Democrats on Monday night to discuss delaying the arms package, according to a person familiar with the meeting who insisted on anonymity to discuss internal discussions. It came after a number of Democrats raised concerns about sending American-made weapons to Israel at a time when it has bombed civilians, as well as a building that housed press outlets included The Associated Press, an American news agency.

A day earlier, 28 Democratic senators — more than half of the party’s caucus — put out a letter publicly calling for a cease-fire. The effort was led by Senator Jon Ossoff, Democrat of Georgia and, at 34, the face of a younger generation of American Jews in Congress. As Republicans pumped out statements squarely blaming Hamas militants, the Democrats’ appeal put the onus on both sides to lay down their weapons — and on Mr. Biden to weigh in to demand it.

Another sign of the evolution came over the weekend from Senator Bob Menendez, Democrat of New Jersey and the chairman of the Foreign Relations Committee. Mr. Menendez is known as one of Israel’s most unshakable allies in the Democratic Party, which he bucked to oppose President Barack Obama’s 2015 nuclear deal with Iran based on Israeli opposition.

Yet on Saturday, as the death toll mounted in Gaza and southern Israel, Mr. Menendez issued a stern statement saying he was “deeply troubled” by Israeli strikes that had killed Palestinian civilians and the tower housing news media outlets. He demanded that both sides “uphold the rules and laws of war” and find a peaceful end to fighting that has killed more than 200 Palestinians and 10 Israelis.

“In response to thousands of rocket attacks fired by Hamas aimed at civilians, Israel has every right to self-defense from terrorists committed to wipe her off the face of the map,” Mr. Menendez said. “But no matter how dangerous and real that threat may be, I have always believed the strength of the U.S.-Israeli relationship flourishes when it is based on the shared values of democracy, freedom, pluralism, and respect for human rights and the rule of law.” 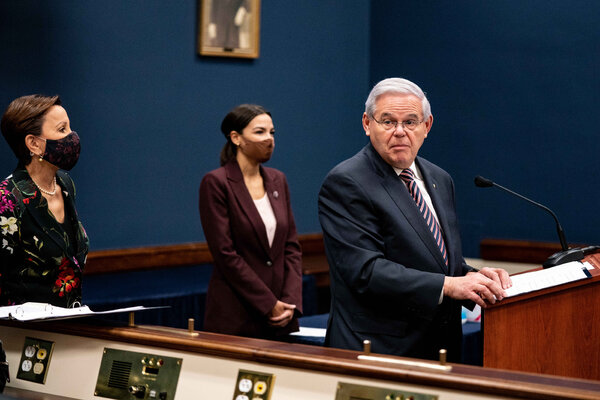 The Democrats who had been most vocal in their criticism of the Israeli government said they meant to send a message to the president as he mulled how to manage the escalating tensions: that the old playbook Mr. Biden used as a senator and as vice president would no longer find the same support in his party.

“That hasn’t worked,” Representative Mark Pocan, a progressive Democrat from Wisconsin, told a top adviser to Mr. Biden late last week, he said in an interview on Monday. “We’re going to be advocating for peace in a way that maybe they haven’t traditionally heard.”

Republicans and AIPAC have been swift to warn against any perceived weakening of the United States commitment to Israel. When Representative Jerrold Nadler of New York, who represents the most Jewish district in the country, led a group of 12 Jewish House Democrats in a letter on Friday that stood by Israel but also said Palestinians “should know that the American people value their lives as we do Israeli lives,” AIPAC quietly worked behind the scenes to discourage lawmakers from signing.

Republicans have also seen a political advantage in trying to use the most extreme statements from progressive Democrats to try to peel Jewish voters away from the party.

Senator Mitch McConnell of Kentucky, the minority leader and a vocal supporter of Israel, condemned Ms. Ocasio-Cortez on Monday for her description of Israel as an “apartheid state” and urged the president to “leave no doubt where America stands.”

“The United States needs to stand foursquare behind our ally,” Mr. McConnell said, “and President Biden must remain strong against the growing voices within his own party that create false equivalence between terrorist aggressors and a responsible state defending itself.”

Few Democrats in Congress have gone that far. But over the past few years, many in the party have modified their approach.

Much of the shift can be traced to debate over the Iran nuclear deal, when Mr. Netanyahu, Israel’s right-wing leader, made a concerted effort to insert himself in American domestic politics to kill the pact being drafted by Mr. Obama. He portrayed support for the deal as a betrayal of Israel and worked to drive a wedge between Republicans and Democrats on the issue. Mr. Netanyahu’s close alliance with Mr. Obama’s successor, Donald J. Trump, only deepened that partisan divide.

But the difference in tone also reflects a broader shift among the Democratic Party over the past decade. As Democratic voters and liberals have become more self-consciously organized around concepts like equity and systemic discrimination, their push for more liberal policy positions on immigration, policing and gun violence at home has reshaped the way many view the conflict in the Middle East and the violence it has produced.

Reflexive support for Israel’s right to defend itself or calls for Israel and Palestinian authorities to return to the negotiating table are now viewed by many on the left as “the linguistic equivalent of ‘our thoughts and prayers go out to the victims of the latest mass shooting,’” said Jeremy Ben-Ami, the president of J Street, a liberal pro-Israel advocacy group that has worked for years to shift the debate as a counterweight to AIPAC.

“That’s no longer good enough,” he said in an interview. “What the United States is doing essentially amounts to international immunity to Israel.”

The dynamic was on display last week after Ms. Ocasio-Cortez pounced on Andrew Yang, the leading candidate in the New York City mayoral race, for issuing a statement last week “standing with the people of Israel.”

“Utterly shameful for Yang to try to show up to an Eid event after sending out a chest-thumping statement of support for a strike killing 9 children,” Ms. Ocasio-Cortez wrote on Twitter. (Mr. Yang later released a new statement saying that his first was “overly simplistic” and “failed to acknowledge the pain and suffering on both sides.”)

That has left some of Israel’s most vocal traditional allies in the party in an awkward position.

Mindful of the crosscurrents in his party and home state, where he faces re-election next year, Senator Chuck Schumer of New York, the majority leader, has been largely silent since the fighting broke out. Like Mr. Menendez, Mr. Schumer voted against the Iran nuclear deal, and he represents the largest Jewish population in the country, ranging from secular progressives to politically conservative Orthodox communities.

In response to a question asked by a reporter at the Capitol on Monday, Mr. Schumer said, “I want to see a cease-fire reached quickly, and mourn the loss of life.”