Lacking the ability to block President Trump’s Supreme Court nominee, Democrats are using the final days of the debate to stoke outrage among voters about the rush to confirm her. 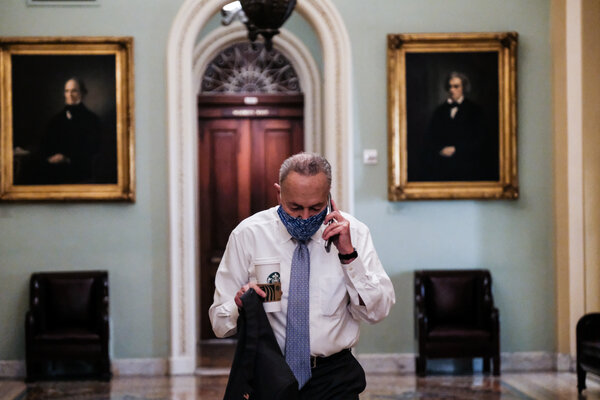 WASHINGTON — Democrats ground the Senate to a crawl on Friday as debate began on confirming Judge Amy Coney Barrett, President Trump’s Supreme Court nominee, unleashing a barrage of dilatory tactics that briefly forced the chamber into an unusual closed session and prompted an acrid partisan brawl.

Lacking the votes to block Judge Barrett’s installation, Democrats hoped to put an indelible stain on her confirmation and brand the process of replacing Justice Ruth Bader Ginsburg as an illegitimate power grab. Their efforts appeared to be squarely aimed at revving up the party’s base just 11 days before the election.

“The Republicans, as we all know, as the nation knows, are running the most partisan, most hypocritical, least legitimate process in the history of Supreme Court nominations,” said Senator Chuck Schumer of New York, the Democratic leader. “We are not going to have business as usual.”

After Mr. Schumer demanded, unusually, that all members be physically present in the chamber to conduct business, though, Republicans roundly rejected each move. In time, they succeeded in beginning formal debate on Judge Barrett’s nomination and setting the Senate on course for a final confirmation vote on Monday.

Most senators were expected to remain in Washington through the weekend to debate Judge Barrett’s nomination, missing some of their last opportunities to campaign in favor of a push to install Mr. Trump’s third Supreme Court nominee by Election Day. Democrats promised more delay tactics, but conceded they were powerless to actually block or delay the vote.

“Might does not make right,” Mr. Schumer said again and again. He was referring to Republicans’ decision to backtrack on earlier promises not to confirm a new justice so close to the election.

Friday’s exchanges, heavy with references to three decades of escalating warfare over the courts, suggested an already polarized Senate was growing only more bitter as Republicans closed in on a singular achievement: a 6-to-3 conservative majority on the nation’s highest court that could well outlast Mr. Trump’s presidency or their own Senate majority.

Senator Mitch McConnell, Republican of Kentucky and the majority leader, briefly tried to refocus attention on Judge Barrett herself, an appeals court judge in Chicago who, at 48, could serve on the court for decades. Like Democrats, Republicans are counting on the confirmation of a young, conservative judge on the court to excite their base and close a dangerously wide polling gap.

“This outstanding nominee is exceptionally suited for this job — period,” Mr. McConnell said. “And I know we all know that.”

Later, after rehashing decades of tit-for-tat confirmation fights with Democrats, he added: “The good news is this: In about 72 hours, I anticipate, we will have a third new justice to the Supreme Court.” 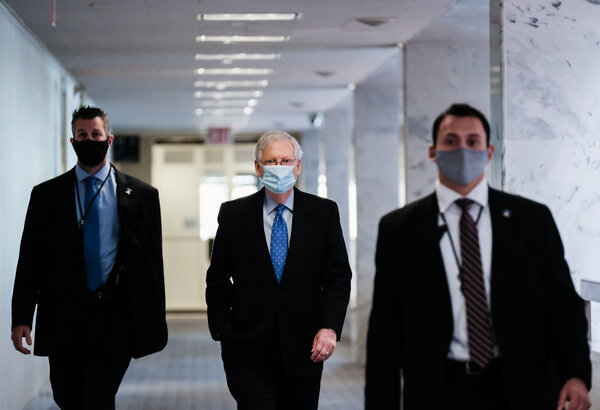 But mostly, Judge Barrett receded to the background as Democrats and Republicans traded complaints and defenses about the confirmation process itself. Democrats trained fury on Republicans for filling the seat at all so close to an election, especially after they refused to fill a similar vacancy in 2016 when President Barack Obama nominated Judge Merrick B. Garland eight months before the election. Then, Republicans insisted that voters should be allowed to have a say in filling the seat.

Democrats began making trouble as soon as the Senate gaveled into session just after noon. When Mr. McConnell tried to begin the day’s business, Mr. Schumer made an unusual demand: Democrats would insist that a quorum of senators be present to do so. Typically, both parties ignore that requirement and only a few senators are present at any one time.

By the time the Senate wrapped up business three hours later, he had forced six-roll call votes, including on whether to indefinitely delay consideration of the nomination, to send it back to the Judiciary Committee, and to adjourn the Senate altogether until after the election. Most of the votes fell along party lines, but Democrats did pick up occasional support from Senators Susan Collins of Maine and Lisa Murkowski of Alaska, both Republicans, who oppose filling the seat before Election Day.

The decision to go into closed session, though, was the most unusual. Not since 2010 has the Senate met in secret in that way. Cameras that broadcast proceedings in the chamber were shut off. Reporters and even most Senate staff were cleared from the chamber. Senators who remained were sworn to secrecy.

Mr. Schumer framed it as a last-ditch effort for senators to have a heart-to-heart discussion about the confirmation process and push off the vote before it was too late.

“The damage to Americans’ faith in these institutions could be lasting,” he said. “So, before we go any further, we should shut off the cameras, close the Senate, and talk face to face about what this might mean for the country.”

Republicans wanted no such discussion. They voted within a matter of minutes to reopen the proceedings and move ahead with considering Judge Barrett.

But it was left to Mr. McConnell, the architect of Republicans’ takeover of the federal courts, to offer a fuller response. Turning away from the cameras to speak directly to Republican members seated at their desks, he offered a selectively curated history of the devolving judicial nominations process in the Senate, reaching back to Democrats’ rejection of Robert Bork, a conservative nominee, in 1987.

Mr. McConnell argued that the decision to block Judge Garland had been consistent with history and so was the decision to confirm Judge Barrett because now, unlike then, the same party controls the White House and the Senate. Democrats view the Garland blockade as a serious escalation from which the chamber has not recovered.

“This is not spin. This is fact,” Mr. McConnell said. Referring to Democrats, he added: “Every new escalation, every new step, every new shattered precedent, every one of them was initiated over there. No exceptions.”

In a sign of how toxic the relationship between the two leaders had become four years after Mr. Schumer assumed his leadership post, Mr. McConnell suggested his counterpart was merely reaping what he had sown.

“I hope our colleague from New York is happy with what he’s built,” Mr. McConnell said. “I hope he’s happy with where his ingenuity has gotten the Senate.”

Mr. Schumer was just as withering.

“We have just heard a tit-for-tat convoluted version of history that the majority leader uses to justify steering the Senate toward one of the lowest moments in its history,” he said in reply. Mr. McConnell’s actions, he added, would “forever defile the Senate.”