WASHINGTON — A push by Democrats to enact the most expansive voting rights legislation in generations is set to collapse in the Senate on Tuesday, when Republicans are expected to use a filibuster to block a measure that President Biden and his allies in Congress have called a vital step to protect democracy.

Despite solid Republican opposition, Democrats plan to bring the voting rights fight to a head on the Senate floor, by calling a test vote to try to advance the broad federal elections overhaul, known as the For the People Act. As Republican-led states rush to enact restrictive new voting laws, Democrats have presented the legislation as the party’s best chance to undo them, expand ballot access from coast to coast and limit the effect of special interests on the political process.

“We can argue what should be done to protect voting rights and safeguard our democracy, but don’t you think we should be able to debate the issue?” Senator Chuck Schumer, Democrat of New York and the majority leader, said on Monday in a last-ditch appeal to Republicans to let the debate proceed.

But in the hours before the vote, Democrats conceded they were facing defeat — at least for now. Even if they succeeded in securing the votes of all 50 senators in the Democratic caucus, party leaders were expected to fall well short of the 60 votes needed to overcome a filibuster and begin debating the bill.

Instead, they focused on Monday on rallying the party around a more limited alternative proposed by Senator Joe Manchin III of West Virginia, who had been the only Democratic holdout on the voting rights measure. Both the White House and former President Barack Obama said his suggestions would address many of the most urgent issues.

Leaders hope that, given the support for his proposal, Mr. Manchin will vote with the rest of the Senate’s Democrats and Democratic-aligned independents to allow the debate to proceed, allowing his party to present a unified front on the bill.

“What we are measuring, I think, is, is the Democratic Party united? We weren’t as of a couple of weeks ago,” Jen Psaki, the White House press secretary, said before acknowledging the vote would fail.

Mr. Obama offered a tepid endorsement, saying it would address many of his concerns about elections, but “doesn’t have everything I’d like to see in a voting rights bill.”

Regardless, Mr. Schumer appeared to have only one remaining option to try to pass the legislation: eliminating or altering the Senate rule that sets a 60-vote threshold for breaking a legislative filibuster. Progressives have clamored to do so since Democrats won a narrow majority in January, and argued before Tuesday’s vote that it would help make their case. Yet a handful of key moderates led by Mr. Manchin insist they will never go along.

With the path forward so murky, top Democrats began framing Tuesday’s vote as a moral victory, and potentially a crucial step in building consensus around eventually blowing up the filibuster.

The outcome, Ms. Psaki said, “may change the conversation on the Hill” around the filibuster, but she offered no clear next steps.

Mr. Manchin had opposed key planks in the original For the People Act as too intrusive into the rights of states to regulate their own elections. His proposal would eliminate a provision neutering state voter identification laws and strip out a public campaign financing program.

But it preserves other key measures, like an end to partisan gerrymandering of congressional districts and the creation of tough new ethics rules. It would also expand early voting, make Election Day a federal holiday and make it easier to vote by mail. 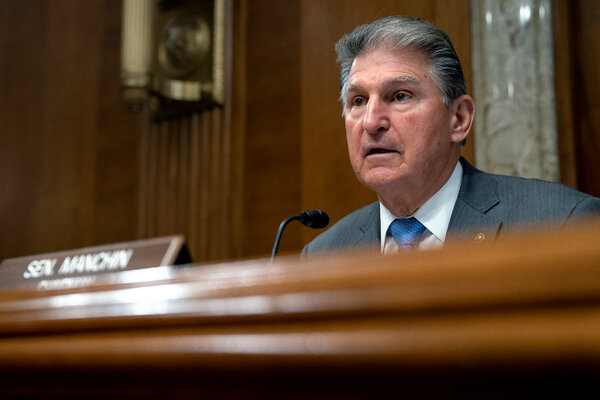 A Monmouth University Poll released on Monday indicated that Mr. Manchin’s position may be more in line with public sentiment, particularly his support for some kinds of voter identification requirements.

The Battle Over Voting Rights

After former President Donald J. Trump returned in recent months to making false claims that the 2020 election was stolen from him, Republican lawmakers in many states have marched ahead to pass laws making it harder to vote and change how elections are run, frustrating Democrats and even some election officials in their own party.