Sir Ed Davey was questioned on whether the Liberal Democrats would be able to adapt to the changing environment of UK politics toward a more aggressive position. Sir Ed has been tasked with bringing the party back to its glory days after suffering severe defeats at both the local and national level over the past ten years. BBC Today host Simon Jack said: “Isn’t it the truth that the Lib Dems are a party for a slightly gentler age?

“Politics today thrives on dividing people into camps, both in the UK and the US.

“And the Lib Dems simply can’t…you’re a fish out of water in that environment.”

But the Lib Dem leader insited his party is capable of withstanding the pressure and could still be able to “surprise” voters. 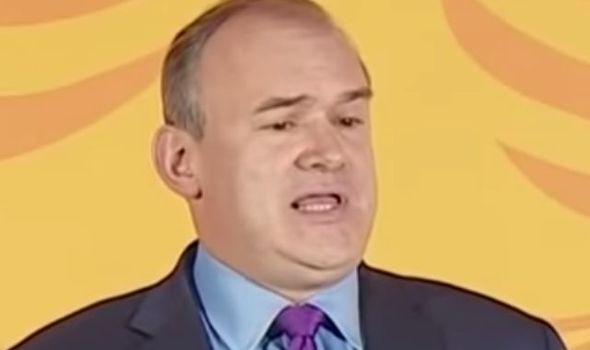 “We’ve had some difficult years, absolutely, but our values of liberalism have been the strongest values over two centuries. Our values, I think, are central to British traditions. The question is how do you articulate that?”

He continued: “I think you’re right, it’s difficult times, some parties get a lot more money than we have, a voting system that it’s not fair.

“Yes, we know we have some challenges but my job is to fix the fundamental problems for the party and that’s to reconnect the voters.

“If we do that, if we can make sure people understand that we are their voice again, I think we can surprise people.”

In his acceptance speech, Sir Ed insisted it was now time for the Lib Dems to “wake up and smell the coffee” after the party secured only 12 percent of the vote in the December general election.

Predecessor Jo Swinson was forced to step down after the abysmal result which also cost her her own seat of East Dunbartonshire to the SNP.

Sir Ed said: “Nationally our party has lost touch with too many voters.

“Yes, we are powerful advocates locally. Our campaigners listen to local people, work hard for communities and deliver results.

“But at the national level. We have to face the facts of three disappointing general election results.”