The co-founder of the Leave.EU campaign group added that if Ms Truss wanted to present “clear blue water” between her and Rishi Sunak she could threaten to invoke Article 16 overriding parts of the Northern Ireland Protocol.

Mr Tice also pointed out that Ms Truss could take on the “bully boys in Brussels”.

He said: “It feels as if they are putting down a bit of a marker.

“They clearly would rather the globalist Sunak to be the next Prime Minister. 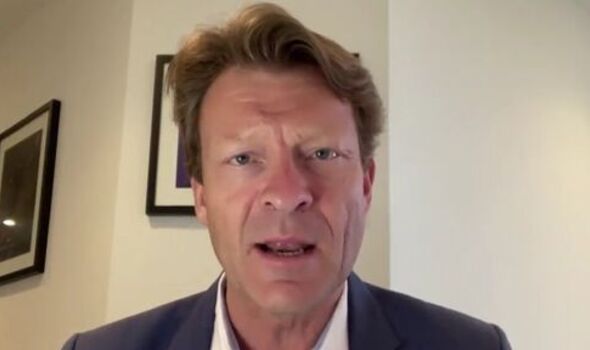 “I think they’re worried that Liz Truss showed some steel when she was Foreign Secretary.

“She was responsible for this new Northern Ireland Protocol bill that’s going through Parliament.

“It’s worth remembering David that this bill is what they call an enabling bill.

“So it gives the Government the right to do something it doesn’t automatically mean it will do that thing.

“And I wonder if Liz Truss wants to give herself some additional ammunition during these five or six weeks of hustings.”

Mr Tice continued by outlining how the Foreign Secretary could outmanoeuvre her opponent before the September 5 results.

He said: “She could actually go further still and you know create some more clear blue water between her and Sunak, and say actually you know what if we get held up in the House of Lords by this then I’m just going to invoke Article 16.

“Possibly by let’s say the Tory party conference and you know I’m going to stand up to the bully boys in Brussels.

“I think that would get her huge support among the traditional Tory membership, who frankly most of whom are Brexiteers, most of whom are sick and tired of the behaviour of the European Union.”

“If she shows herself being tough now David, she could really give herself a huge additional advantage amongst the membership.”

It comes as polling of Tory members by YouGov has shown that Ms Truss has a commanding lead with 62 percent support according to 38 percent for Mr Sunak.

It also showed that the Tory grassroots are more likely to think that Ms Truss would make a good leader than Mr Sunak.