The European Union’s trade chief was accused of undermining Ireland’s attempt to curb the spread of coronavirus when he ignored orders to self-isolate after returning to the country on holiday. Before his resignation, Mr Hogan had faced days of pressure to quit his £240,000-a-year post after failing to declare the exact details of last month’s trip. European Commission President Ursula von der Leyen forced him to publish an itinerary of his holiday in a bid to establish the facts.

But it later emerged Mr Hogan he contradicted his original statement, leaving out information on his breach of lockdown rules and being stopped by police for using a phone while driving.

His position became untenable after it was claimed he repeatedly misled Mrs von der Leyen with several different accounts of the holiday. 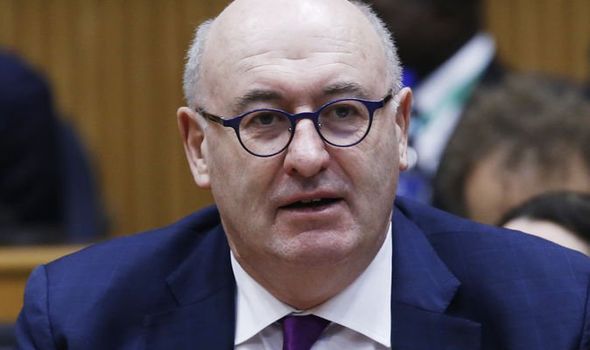 Brussels insiders said the EU President was left with no choice but to give him the push after her reputation was left in tatters by the scandal.

Sources also said the bloc wanted to bolster its standing after a failed response to the pandemic left citizens questioning its worth.

He was given orders to resign or face the sack during a tetchy discussion between the pair.

Mr Martin said the eurocrat had been a “significant difficulty for the government in terms of the changing narrative as this story has unfolded”.

This is a breaking news story, please refresh the page for updates.