The European Commission announced new controls on drug makers that want to send doses of Covid jabs abroad.  Manufacturers will have to provide detailed information to eurocrats if they plan to sell abroad. Bitter eurocrats refused to include Britain on a 92-strong list of countries that European pharmaceutical firms will still be allowed to ship Covid jabs to.

The blockade was announced in the midst of a row between the bloc and UK-based AstraZeneca, the maker of the Oxford-developed jab, over the delivery of vaccines to European capitals.

Commission vice-president Valdis Dombrovskis said: “This is a race against the clock. We cannot lose time because of vaccines not being deliver on an agreed schedule.”

Despite the EU’s vaccine scheme lagging behind Britain’s, Mr Dombroskis claimed the export restrictions “is not targeting any specific country”. 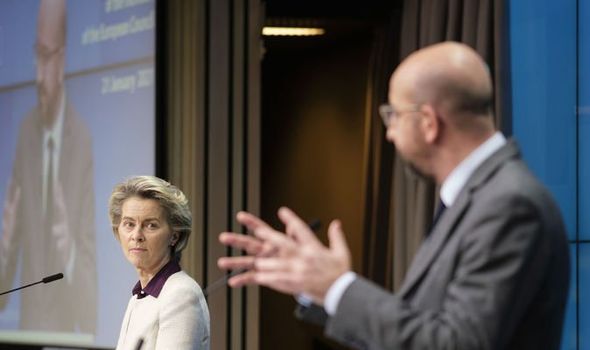 “The only race race we’re in is against this virus, and this what has been in the centre of every single piece of work we have been doing for almost a year.”

She said the export ban was about “ensuring access of vaccines to European citizens”.

Their remarks came after Commission officials demanded that AstraZeneca divert tens of millions of British-made doses to European capitals to cover shortfall of jabs on the Continent.