PERRY, Ga. — The Republican Senate candidates in Georgia are spending tens of millions of dollars on an almost entirely negative advertising campaign, embracing a strategy of riling up the conservative base instead of reaching out to a cross-section of voters in hopes of generating enough turnout to win two critical runoff elections that will decide control of the Senate.

Indeed, despite President Trump’s loss here, the early days of campaigning in the runoff races look much like the months that preceded them. The incumbent Republican senators, Kelly Loeffler and David Perdue, have filled the airwaves with scathing attack ads seeking to paint Democrats as radicals fundamentally opposed to the country’s core principles and warning that Democratic sway over the Senate would usher in a wave of socialism.

The two senators have not aired a single positive advertisement between them, and neither have two outside groups supporting them, according to the ad tracking firm Advertising Analytics. The breathless ad campaigns and demonizing of liberals reflect the stakes for the Republican Party and its voters as they try to deny Democrats total control of the White House and Congress.

Mr. Perdue said this past week at a rally in Perry, Ga., that his Democratic opponent, Jon Ossoff, was a “trust fund socialist who lives off his family’s money making documentary movies that no one’s ever watched.”

And even as he acknowledged the dark tenor of the race, he portrayed himself as a victim of the negativity, rather than a participant.

“I’m not sure if my mother was alive today that she would even vote for me, with all this negative advertising,” he joked.

At the rally, where both candidates appeared along with Senator Tom Cotton of Arkansas, Ms. Loeffler said Democratic victories would “literally shred the fabric of what makes our country the greatest in the world.”

The Senate runoff elections on Jan. 5 will determine whether President-elect Joseph R. Biden Jr. begins his administration with a unified Congress or a divided one.

If the two Democratic candidates, Mr. Ossoff and the Rev. Raphael Warnock, win and secure a 50-50 split in the Senate, ties could be broken by Vice President-elect Kamala Harris, and far more policy options would be on the table for Democrats. If Mr. Perdue or Ms. Loeffler prevail, the Republicans could stymie major legislation.

But it’s how the candidates are running that has caught the eye of voters and political strategists, with an avalanche of political advertising descending on the state; the $231 million poured into television ads so far in what will be a roughly two-month runoff campaign has surpassed the spending in the entire primary and general Senate elections combined.

There is no run to the center, despite Georgia’s voting for a Democratic presidential nominee for the first time in decades and proving itself to be a true battleground state. Republicans, who are the favorites in the two races, are replicating most parts of Mr. Trump’s message without him on the ballot. Democrats are seeking to build on Mr. Biden’s message of pragmatic unity and his electoral formula: a multiracial coalition powered by the state’s urban and suburban areas.

At campaign events and debates, as well as on airwaves with more than 27 different ads currently appearing, the candidates are racing furiously to motivate their own bases instead of catering to swing voters. Both parties have bet the house on turnout, not persuasion. 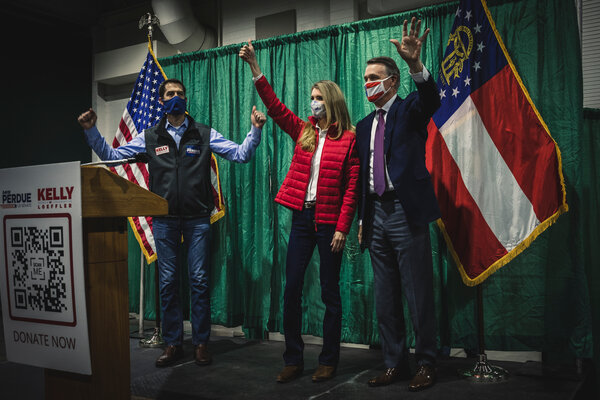 Ms. Loeffler has run almost entirely negative ads against her opponent, Mr. Warnock, accusing him of being “anti-police” and a “radical.” The few ads she has aired that highlight her record begin with a warning: “Don’t believe the liberal lies.” Mr. Warnock has not run any purely negative ads, preferring less caustic contrast ads like ones comparing his record on health care with hers, and he has produced a slate of positive ads on his life story and platform.

Mr. Perdue has also fueled the negative environment. Up to this point, his campaign has run 100 percent negative ads, including ones that call his opponent, Mr. Ossoff, a “radical liberal” who wants to bring “horrific change.”

Mr. Perdue has rejected debating Mr. Ossoff during the runoff race. At the rally, Mr. Perdue said that Republican voters should not focus on policy for this election, an explicit admission that his outreach was addressed solely to members of his own party. He led Mr. Ossoff during the first round of voting in November, and is betting that a similar coalition will be successful in the runoff, when political strategists believe Democratic participation may drop off.

“I don’t need you to worry about the issues — you’ve already done that,” he said. “We’ve already litigated that with these other guys. What I need you to do right now is just pray to God that we get our vote out.”

The plea pointed to how, even in purple states, moderate politicians — particularly right-leaning ones — are a dying breed. In crucial presidential battlegrounds including Georgia, Republican candidates have clung to Mr. Trump, staking their future on his ability to find new conservative voters in rural, predominantly white areas rather than claw back the suburban moderates he has at times repelled.

The Perdue campaign and the Senate Leadership Fund, a super PAC that is linked to Senator Mitch McConnell, the majority leader, have combined for more than $3 million in attack ads in the past week alone. One ad from the Senate Leadership Fund, for which the super PAC has spent $1.8 million over just four days, blasts Mr. Ossoff as simultaneously beholden to the liberal wing of the Democratic Party and big corporations.

Phil Hall, a 67-year-old retiree who attended the rally, said he appreciated the Republicans’ willingness to call out how, in his view, Democrats were “heading down the path to socialism and global elitism.”

Mr. Hall particularly liked that Ms. Loeffler and Mr. Cotton had urged Georgia’s Republican secretary of state, Brad Raffensperger, to resign, because Mr. Hall does not believe that Mr. Biden won the state this month.

The Democratic candidates in Georgia have tried to project themselves as above the fray pitching themselves as pragmatists in the mold of Mr. Biden.

Still, Mr. Warnock and Mr. Ossoff are a far cry from the Republican-lite figures that their party once nominated in Georgia. As the state’s demographics change, with an influx of nonwhite residents, college-educated white people and immigrants, Democrats have grown increasingly hopeful that they can win statewide elections by turning out a coalition of Atlanta suburbanites, people of color and young voters of all races.

The same day that the Republicans rallied in Perry, the Democrats held a get-out-the-vote event in the part of the state that showed the greatest change from the 2016 presidential election to this cycle — the greater Atlanta suburbs.

State Representative Miriam Paris, a Democrat, read a statement at the event that made clear the party’s policy focus.

“We need Jon Ossoff and Rev. Raphael Warnock in the Senate to get Covid-19 under control, pass real economic relief for small businesses and working families, and protect the 1.8 million Georgians with pre-existing conditions,” she said.

The Democratic challengers agree with their Republican counterparts that their election would signal change in Washington, but they argue that this would be good for Georgians.

“Change has come to Georgia, and change is coming to America,” Mr. Ossoff said at the Democrats’ rally on Thursday in Jonesboro, south of Atlanta.

Indeed, the national focus on Georgia offers a window into the future of both political parties. Democrats are seeking to maintain their coalition of urban voters and suburbanites, warding off accusations from Republicans that the party has become too progressive. Neither Mr. Ossoff nor Mr. Warnock has endorsed proposals like single-payer health care or expanding the size of the Supreme Court, but the Republicans are trying to tie them to fringe elements of the Democratic Party.

The Republican Party is at war with itself, fueled by Mr. Trump’s refusal to accept the results of the election.

The campaign of Ms. Loeffler, one of the wealthiest members of Congress, is a stark example of the country’s shifting politics. Once thought of as a business-focused Republican who stayed away from cultural issues, she has transformed herself into a culture warrior in the style of Mr. Trump.

As she faces off against Mr. Warnock, who is the pastor of the historic Ebenezer Baptist Church in Atlanta and is seeking to become the state’s first Black senator, her strategy has stood out for its tone on issues of race and policing.

One Loeffler ad shows a classroom of mostly white students reciting the Pledge of Allegiance as a narrator intones: “This is America. But will it still be if the radical left controls the Senate?”

Another ad features a now-famous clip of the Rev. Jeremiah A. Wright Jr., once the pastor of former President Barack Obama, delivering a sermon outlining the nation’s past oppression of racial minorities that included the phrase “God damn America.”

In the past, Mr. Warnock has suggested that the sermon squared with the “truth-telling tradition of the Black church.” Ms. Loeffler’s ad says that Mr. Warnock “celebrated anti-American hatred,” and replays the clip of Mr. Wright’s sermon twice in 30 seconds.

She also mentioned Mr. Wright during her speech at the rally. In a span of 45 seconds, Ms. Loeffler tied Mr. Warnock to Mr. Wright; Fidel Castro, the former Cuban leader; Stacey Abrams, the former Democratic candidate for governor in Georgia; George Soros, the liberal megadonor; Chuck Schumer, the Senate minority leader; and Representative Alexandria Ocasio-Cortez, the progressive champion — a greatest hits of villains to conservatives.

Looming over the runoff elections are the relentless attempts by Mr. Trump and other Republicans to push baseless claims about voting fraud and erode trust in the electoral system. Conservatives have targeted any figure who acknowledges Mr. Trump’s loss in Georgia, including Mr. Raffensperger, the secretary of state.

Dave Adcock, a 70-year-old Republican at the event in Perry, said the only way he would trust the Senate race results was if Mr. Raffensperger resigned, calling him a RINO, or a Republican in Name Only, who had “botched this whole damn thing.”

A moment later, he lamented the degradation of political discourse and civility.

“Over the years, I hate that it’s come down to insults,” Mr. Adcock said.