Fired-up voters across Georgia descended on polling sites in record-breaking numbers on Monday, the first day of early, in-person balloting, as state and local officials reported glitches with the state’s new and troubled voting system.

In Atlanta and its suburbs, long lines of socially distanced voters began forming before dawn, after a federal judge rejected an attempt to replace the $107 million system with paper ballots until its problems could be sorted out.

“It’s an awesome thing,” Norman Robinson III said as he stood in a line snaking for more than a half-mile outside his early voting site at the Gallery at South DeKalb in Decatur, near Atlanta. “We thought we were going to get here early.”

Dr. Robinson, an educator specializing in math, science and technology, added: “My parents were jailed in college during the 1960s for exercising their rights to vote. This is in my blood to make sure I honor and continue their fight for voices to be heard.”

It would end up taking Dr. Robinson more than four hours to vote, an exercise that became a test of endurance for many others on Monday, as they steadfastly remained in long lines even though it was just the first day of nearly three weeks of early voting.

Andrea Young, the executive director of the American Civil Liberties Union of Georgia, called it an “outpouring,” adding: “People are very energized. Georgia this year is a place where your vote matters.”

Elections officials acknowledged technical glitches around the state, but said the long lines were primarily a result of voter turnout.

“Georgia is seeing record turnout for early voting because of excitement and enthusiasm about the upcoming election,” said Walter Jones, a spokesman for Brad Raffensperger, Georgia’s Republican secretary of state.

But the snaking lines were not entirely a result of voter fervor. As hundreds lined up to vote in metropolitan Atlanta, problems emerged with electronic equipment at State Farm Arena, according to Jessica Corbitt-Dominguez, a spokeswoman for Fulton County, which includes the city.

Voters complained on Twitter of 90-minute delays as multiple machines had to be rebooted.

Aklima Khondoker, the Georgia director for All Voting Is Local, a voting rights group, said that electronic poll pads on which voters check in had created problems around the state. “We’ve seen over 10 counties where this is happening,” she said.

A variety of technical issues had been the topic of litigation in which a voting rights group, the Coalition for Good Governance, argued that the system should be set aside in favor of paper ballots. In a ruling on Sunday night, Judge Amy Totenberg of the United States District Court for the Northern District of Georgia acknowledged the system had problems, but said it was too late to revamp the voting system.

The state did not have the capacity “to turn on a dime and switch to a full-scale hand-marked paper ballot system,” she wrote, declining to make the shift recommended by the Coalition for Good Governance. 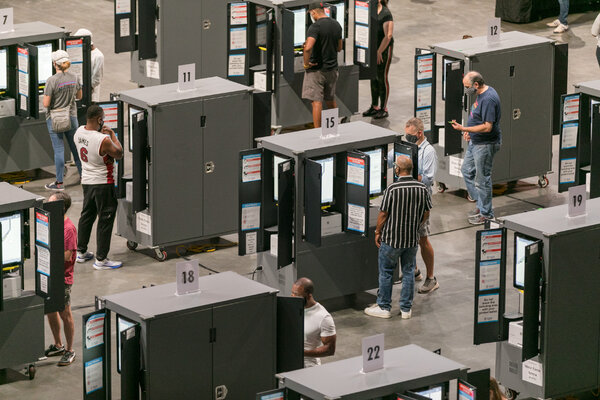 The decision came as battles over ballot access intensified across the country. On Sunday, California election officials announced that they were investigating the placement of unofficial drop boxes for mail-in balloting in Los Angeles, Fresno and Orange Counties — illegal sites that could be used to identify and eliminate the ballots of unsuspecting voters.

Georgia has been the arena for many voting rights skirmishes recently, but the latest problems were less about politics and more about technology.

The state’s new voting system is a hybrid. The machines do not actually store ballots; voters fill out their preferences on the touch-screen, the results are printed out and scanned, and then they are stored in locked boxes. The system also relies on electronic poll books that replace old-fashioned paper poll books.

Problems in the June primary were attributed partly to the new voting system, but also to errors caused by poorly trained poll workers and a shortage of workers because many had decided to remain home over fears of the coronavirus.

“For this to work, four different machines have to work correctly,” said Ms. Young, noting the system’s complexity. Since the state’s primary elections, the A.C.L.U. has been involved in recruiting 2,000 technology-savvy poll workers who understand the system, she said.

“I want everyone, if you don’t already have one, to make a plan to vote,” Dr. Biden told a crowd of people spread out in a parking lot. “One vote could make the difference between winning and losing a precinct. One precinct could win this state, and this state could decide our future for generations to come.”

Dr. Biden made another appearance on Monday in Columbus, Ga. Donald Trump Jr., the president’s eldest son, also had scheduled two stops in the state on Monday.

“Have you voted yet today? If you haven’t done it by the end of the day, do it tomorrow,” the younger Mr. Trump told a crowd of the president’s supporters at the Forest City Gun Club in Savannah. “Early voting has started now, and we need you guys out there.”

Mr. Trump was expected to repeat his message later Monday in Kennesaw.

Georgians did not seem to need much coaxing to show up at the polls, however. As of Sunday, 1,541,348 people had requested absentee ballots and 380,550 had already been accepted, according to Mr. Raffensperger’s office.

Voters also appeared to be determined. Dr. Robinson said the line kept growing longer and longer at his polling place, situated in a vacant department store. He said the backup was caused partly by glitches with the computerized poll books, the same equipment cited as a problem at State Farm Arena.

“I was proud of people because they weren’t getting discouraged,” he said.

In Gwinnett County, an online computer system notified voters that waiting times there were also as long as eight hours at some early voting locations.

In Cobb County, Everlean Rutherford, a government employee, said she had been waiting in line for more than an hour to vote and predicted she would be there for another two or three.

“One of the poll workers said this is the most that they’ve ever had for early voting,” she said.

President Trump will hold a rally in Florida and Joe Biden will campaign in Ohio as the confirmation hearings for Judge Amy Coney Barrett get underway. Read live updates.