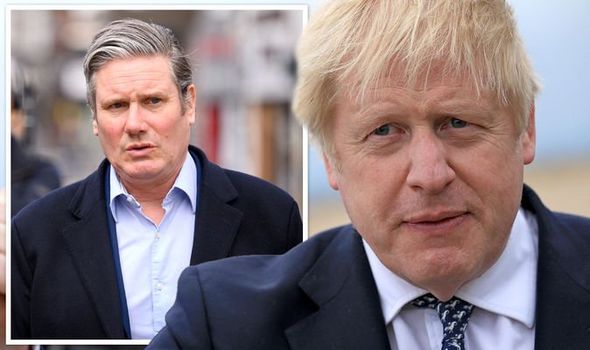 According to Survation for ITV’s Good Morning Britain, the Tories have a 17-point lead over Labour ahead of the election this Thursday. It comes as Prime Minister Boris Johnson said during a visit to Hartlepool: “I have always believed that it was going to be a tough fight, and I still believe that is the case.”

Mr Johnson added he hoped voters would focus on the “massive opportunities” the Tories had brought by delivering on Brexit. Hartlepool residents backed leaving the European Union by 70 percent in 2016.

He said: “Here in Hartlepool, for instance, you’ve got a fantastic community that voted for change in 2016 and we’re delivering that change and I hope that they will come forward and vote for change again.”

Despite Mr Johnson’s warning of a “tough” ride at the polls, Shane Moore, the independent leader of Hartlepool Council, told The Telegraph the feeling on the ground is that the Tories will win. He said: “It’s theirs to lose.

“Hartlepool over the years was Labour through and through. People said ‘I voted Labour because my dad voted Labour’, but it’s been broken and it’s difficult to get those votes back. Almost perversely, Boris Johnson has, bizarrely, managed to speak more to the working class and Hartlepudlian.”