The Senate Judiciary Committee lined up a vote for Oct. 22 on Judge Amy Coney Barrett’s nomination to the Supreme Court, as Democrats warned Republicans would rue the day. 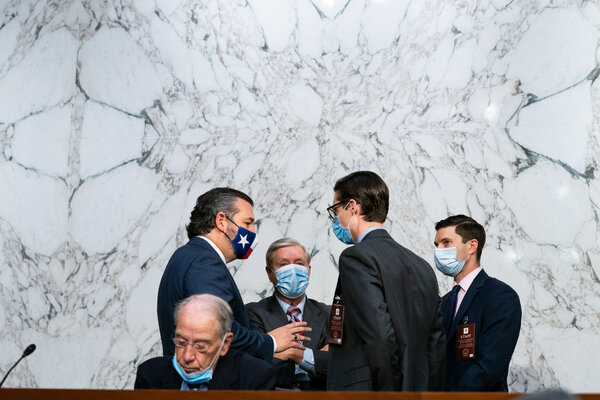 Senate Republicans plowed ahead with unusual speed on Thursday to fulfill their promise to confirm Judge Amy Coney Barrett to the Supreme Court, blowing past objections from Democrats to cement a 6-3 conservative majority before the November election.

In a partisan clash that previewed future fights, Senator Lindsey Graham, Republican of South Carolina and the chairman of the Judiciary Committee, forced through a motion to schedule the panel’s vote on Judge Barrett’s nomination for Oct. 22. That would be just over a month after Justice Ruth Bader Ginsburg’s death created the vacancy and less than two weeks before Election Day.

In doing so, he conceded that President Trump was in danger of losing the White House, underscoring the political stakes of the fight and its potential consequences for the president and for Republicans’ hopes of keeping control of the Senate.

Speaking in Kentucky, where he had just cast his own ballot, Senator Mitch McConnell, the majority leader, left little doubt about what would happen next. The full Senate, he told reporters, would begin considering Judge Barrett’s confirmation on Oct. 23.

“We have the votes,” he said flatly.

In the hearing room where the Judiciary Committee spent more than 20 tense hours with Judge Barrett this week, outraged Democrats used some of their last remaining procedural levers to try to slow Republicans’ progress — while warning the majority party of dire consequences for what they called an illegitimate process. They briefly denied the committee the quorum it needed to conduct business and forced a vote to postpone the proceedings.

Republicans overcame both setbacks, ignoring the quorum requirement and easily defeating the request for a delay. Democrats conceded they had no real power to block the ascension of Judge Barrett, a 48-year-old appeals court judge and Notre Dame law professor.

“I recognize, Mr. Chairman, that this goose is pretty much cooked,” said Senator Cory Booker, Democrat of New Jersey.

With a vote locked in place, Republicans appeared to have few — if any — remaining hurdles before them in a history-making dash to achieve a long-sought conservative-leaning court that could reconsider landmark rulings on abortion, gay rights, corporate power and the Affordable Care Act.

No Supreme Court confirmation has occurred as close to an election as the one scheduled for Judge Barrett. In this case, millions of Americans have already cast their ballots.

Democrats cited that fact frequently as they forced a raw and unusually substantive debate among Judiciary Committee members over the state of Washington’s judicial wars, and of the Senate itself. While the questioning of Judge Barrett this week was marked by general civility and respect for the nominee, senators amped up their attacks on each other on Thursday.