The House Ways and Means Committee’s proposal to pay for trillions in social spending leaves wealth gains and inheritances largely alone. It focuses instead on a more traditional target: income. 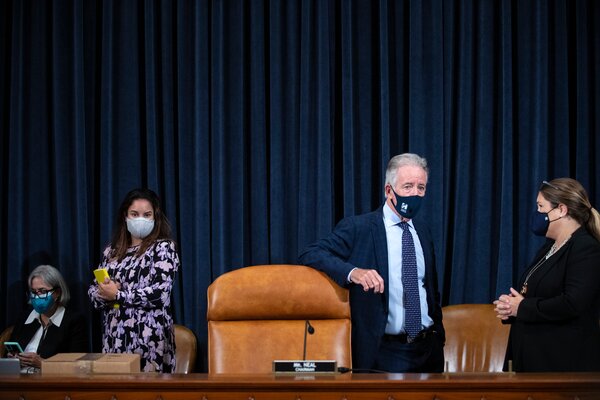 By Jonathan Weisman and Jim Tankersley

WASHINGTON — House Democrats on Monday presented a plan to pay for their expansive social policy and climate change package by raising taxes by more than $2 trillion, largely on wealthy individuals and profitable corporations.

But the proposal, while substantial in scope, stopped well short of changes needed to dent the vast fortunes of tycoons like Jeff Bezos and Elon Musk, or to thoroughly close the most egregious loopholes exploited by high-flying captains of finance. It aimed to go after the merely rich more than the fabulously rich.

Facing the delicate politics of a narrowly divided Congress, senior House Democrats opted to be more mindful of moderate concerns in their party than of its progressive ambitions. They focused on traditional ways of raising revenue: by raising tax rates on income rather than targeting wealth itself.

Representative Dan Kildee of Michigan, a Democrat on the Ways and Means Committee, which crafted the plan, called it “the boldest common denominator.”

“Being for something doesn’t make it law; 218 votes in the House, 50 votes in the Senate and the president’s signature make it law,” he said, adding, “What I don’t want is another noble defeat.”

But the bill dispenses of measures floated by the White House and Senate Democrats to tax wealth or to close off avenues that the superrich have exploited to pass on a lifetime of gains to their heirs tax-free.

“It would be a monumental mistake for Congress to pass a bill that really exempts billionaires,” said Senator Ron Wyden of Oregon, the Democratic chairman of the Finance Committee.

Key Democrats cautioned on Monday that the House proposal was likely to change — perhaps considerably — as Mr. Biden’s economic agenda wends its way through the House and Senate, where Democrats hold slim majorities and must hold nearly every member of their ideologically diverse caucus together. But White House officials welcomed the Ways and Means plan and said it took important steps toward the president’s vision of a tax code that rewards ordinary workers at the expense of the very rich.

The proposal includes substantial measures to raise taxes on the rich. Taxable income over $450,000 — or $400,000 for unmarried individuals — would be taxed at 39.6 percent, the top rate before President Donald J. Trump’s 2017 tax cut brought it to 37 percent. The top capital gains rate would rise to 25 percent from 20 percent, considerably less than a White House proposal that would have taxed investment gains as income for the richest, at 39.6 percent.