LaGRANGE, Ga. — Lonnie Hollis has been a member of the Troup County election board in West Georgia since 2013. A Democrat and one of two Black women on the board, she has advocated Sunday voting, helped voters on Election Days and pushed for a new precinct location at a Black church in a nearby town.

But this year, Ms. Hollis will be removed from the board, the result of a local election law signed by Gov. Brian Kemp, a Republican. Previously, election board members were selected by both political parties, county commissioners and the three biggest municipalities in Troup County. Now, the G.O.P.-controlled county commission has the sole authority to restructure the board and appoint all the new members.

“I speak out and I know the laws,” Ms. Hollis said in an interview. “The bottom line is they don’t like people that have some type of intelligence and know what they’re doing, because they know they can’t influence them.”

Ms. Hollis is not alone. Across Georgia, members of at least 10 county election boards have been removed, had their position eliminated or are likely to be kicked off through local ordinances or new laws passed by the state legislature. At least five are people of color and most are Democrats — though some are Republicans — and they will most likely all be replaced by Republicans.

Ms. Hollis and local officials like her have been some of the earliest casualties as Republican-led legislatures mount an expansive takeover of election administration in a raft of new voting bills this year.

G.O.P. lawmakers have also stripped secretaries of state of their power, asserted more control over state election boards, made it easier to overturn election results, and pursued several partisan audits and inspections of 2020 results.

Republican state lawmakers have introduced at least 216 bills in 41 states to give legislatures more power over elections officials, according to the States United Democracy Center, a new bipartisan organization that aims to protect democratic norms. Of those, 24 have been enacted into law across 14 states.

G.O.P. lawmakers in Georgia say the new measures are meant to improve the performance of local boards, and reduce the influence of the political parties. But the laws allow Republicans to remove local officials they don’t like, and because several of them have been Black Democrats, voting rights groups fear that these are further attempts to disenfranchise voters of color.

The maneuvers risk eroding some of the core checks that stood as a bulwark against former President Donald J. Trump as he sought to subvert the 2020 election results. Had these bills been in place during the aftermath of the election, Democrats say, they would have significantly added to the turmoil Mr. Trump and his allies wrought by trying to overturn the outcome. They worry that proponents of Mr. Trump’s conspiracy theories will soon have much greater control over the levers of the American elections system.

“It’s a thinly veiled attempt to wrest control from officials who oversaw one of the most secure elections in our history and put it in the hands of bad actors,” said Jena Griswold, the chairwoman of the Democratic Association of Secretaries of State and the current Colorado secretary of state. “The risk is the destruction of democracy.”

Officials like Ms. Hollis are responsible for decisions like selecting drop box and precinct locations, sending out voter notices, establishing early voting hours and certifying elections. But the new laws are targeting high-level state officials as well, in particular secretaries of state — both Republican and Democratic — who stood up to Mr. Trump and his allies last year.

Republicans in Arizona have introduced a bill that would largely strip Katie Hobbs, the Democratic secretary of state, of her authority over election lawsuits, and then expire when she leaves office. And they have introduced another bill that would give the Legislature more power over setting the guidelines for election administration, a major task currently carried out by the secretary of state. 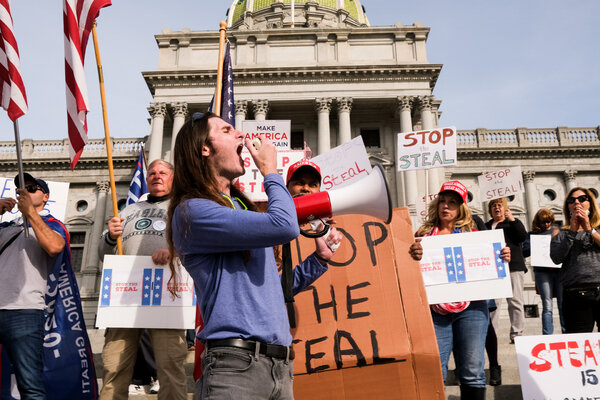 Kansas Republicans in May overrode a veto from Gov. Laura Kelly, a Democrat, to enact laws stripping the governor of the power to modify election laws and prohibiting the secretary of state, a Republican who repeatedly vouched for the security of voting by mail, from settling election-related lawsuits without the Legislature’s consent.

And more Republicans who cling to Mr. Trump’s election lies are running for secretary of state, putting a critical office within reach of conspiracy theorists. In Georgia, Representative Jody Hice, a Republican who voted against certifying President Biden’s victory, is running against Mr. Raffensperger. Republican candidates with similar views are running for secretary of state in Nevada, Arizona and Michigan.

“In virtually every state, every election administrator is going to feel like they’re under the magnifying glass,” said Victoria Bassetti, a senior adviser to the States United Democracy Center.

More immediately, it is local election officials at the county and municipal level who are being either removed or stripped of their power.

In Arkansas, Republicans were stung last year when Jim Sorvillo, a three-term state representative from Little Rock, lost re-election by 24 votes to Ashley Hudson, a Democrat and local lawyer. Elections officials in Pulaski County, which includes Little Rock, were later found to have accidentally tabulated 327 absentee ballots during the vote-counting process, 27 of which came from the district.

Mr. Sorvillo filed multiple lawsuits aiming to stop Ms. Hudson from being seated, and all were rejected. The Republican caucus considered refusing to seat Ms. Hudson, then ultimately voted to accept her.

But last month, Arkansas Republicans wrote new legislation that allows a state board of election commissioners — composed of six Republicans and one Democrat — to investigate and “institute corrective action” on a wide variety of issues at every stage of the voting process, from registration to the casting and counting of ballots to the certification of elections. The law applies to all counties, but it is widely believed to be aimed at Pulaski, one of the few in the state that favor Democrats.

The author of the legislation, State Representative Mark Lowery, a Republican from a suburb of Little Rock, said it was necessary to remove election power from the local authorities, who in Pulaski County are Democrats, because otherwise Republicans could not get a fair shake.

“Without this legislation, the only entity you could have referred impropriety to is the prosecuting attorney, who is a Democrat, and possibly not had anything done,” Mr. Lowery said in an interview. “This gives another level of investigative authority to a board that is commissioned by the state to oversee elections.”

A separate new Arkansas law allows a state board to “take over and conduct elections” in a county if a committee of the legislature determines that there are questions about the “appearance of an equal, free and impartial election.”

In Georgia, the legislature passed a unique law for some counties. For Troup County, State Representative Randy Nix, a Republican, said he had introduced the bill that restructured the county election board — and will remove Ms. Hollis — only after it was requested by county commissioners. He said he was not worried that the commission, a partisan body with four Republicans and one Democrat, could exert influence over elections.

“The commissioners are all elected officials and will face the voters to answer for their actions,” Mr. Nix said in an email.

Eric Mosley, the county manager for Troup County, which Mr. Trump carried by 22 points, said that the decision to ask Mr. Nix for the bill was meant to make the board more bipartisan. It was unanimously supported by the commission.

“We felt that removing both the Republican and Democratic representation and just truly choose members of the community that invest hard to serve those community members was the true intent of the board,” Mr. Mosley said. “Our goal is to create both political and racial diversity on the board.”

In Morgan County, east of Atlanta, Helen Butler has been one of the state’s most prominent Democratic voices on voting rights and election administration. A member of the county board of elections in a rural, Republican county, she also runs the Georgia Coalition for the People’s Agenda, a group dedicated to protecting the voting rights of Black Americans and increasing their civic engagement.

But Ms. Butler will be removed from the county board at the end of the month, after Mr. Kemp signed a local bill that ended the ability of political parties to appoint members.

“I think it’s all a part of the ploy for the takeover of local boards of elections that the state legislature has put in place,” Ms. Butler said. “It is them saying that they have the right to say whether an election official is doing it right, when in fact they don’t work in the day to day and don’t understand the process themselves.”

It’s not just Democrats who are being removed. In DeKalb County, the state’s fourth-largest, Republicans chose not to renominate Baoky Vu to the election board after more than 12 years in the position. Mr. Vu, a Republican, had joined with Democrats in a letter opposing an election-related bill that eventually failed to pass.

To replace Mr. Vu, Republicans nominated Paul Maner, a well-known local conservative with a history of false statements, including an insinuation that the son of a Georgia congresswoman was killed in “a drug deal gone bad.”

Back in LaGrange, Ms. Hollis is trying to do as much as she can in the time she has left on the board. The extra precinct in nearby Hogansville, where the population is roughly 50 percent Black, is a top priority. While its population is only about 3,000, the town is bifurcated by a rail line, and Ms. Hollis said that sometimes it can take an exceedingly long time for a line of freight cars to clear, which is problematic on Election Days.

“We’ve been working on this for over a year,” Ms. Hollis said, saying Republicans had thrown up procedural hurdles to block the process. But she was undeterred.

“I’m not going to sit there and wait for you to tell me what it is that I should do for the voters there,” she said. “I’m going to do the right thing.”