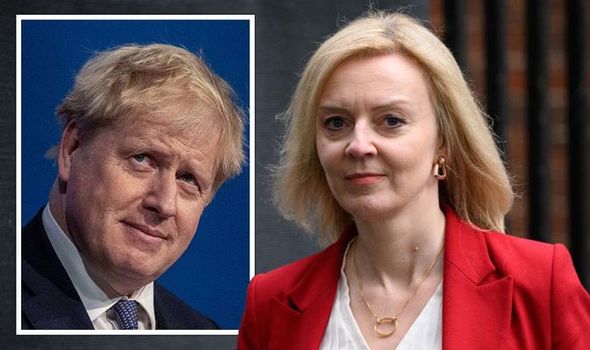 The Foreign Secretary was flying back from Australia yesterday where she had been focussing on strengthening security and defence ties with a key ally. But in her absence reports of a “fizz with Liz” campaign to win over Tory MPs emerged.

However, a source close to Ms Truss strongly rejected the claims.

The ally said: “We’re getting quite agitated about this suggestion flying around certain parts of the lobby that Liz is running a leadership campaign.

“It’s total rubbish, she backs the PM to the hilt. ‘Fizz with Liz’ is never a term we’ve used. She meets MPs all the time to hear their views and talk about foreign policy, it’s all part of being a good Cabinet Minister.

“She’s getting on with the job of leading EU talks and leading on making the vision of Global Britain a reality.”

Nevertheless many Tory MPs have been speculating that a change of leader will come down to a choice between the Foreign Secretary and Chancellor Rishi Sunak.

Ms Truss had already impressed many of her colleagues by signing a series of trade deals in her former role as International Trade Secretary while it is understood that privately she has been very critical of Mr Sunak’s tax rises.

Tory MPs are also very impressed by her robust approach to Russia and China and belief that Britain is still a force to be reckoned with.

An ally said: “She’s trying to reassert Britain’s position in the world. We’re a great country, the world’s fifth biggest economy and a nuclear power, and it’s right that we’re playing an important role in international efforts to challenge adversaries like Russia.”

Despite Ms Truss’ denials there is evidence that potential rivals to her are in the process of putting together leadership teams.

The Sunday Express was contacted by one team to discuss their potential unnamed candidate should the Prime Minister be forced out.

Currently, Mr Sunak is the favourite to win at 11/8 while Ms Truss is second at 5/1 according to Ladbrokes.

But the possibility that Tory backbenchers may want to go outside the Cabinet for a new leader is reflected in that former Foreign Secretary Jeremy Hunt is third favourite at 7/1.