In a letter to the former House speaker, the select committee said the Georgia Republican had deliberately incited anger among voters with false claims of election fraud. 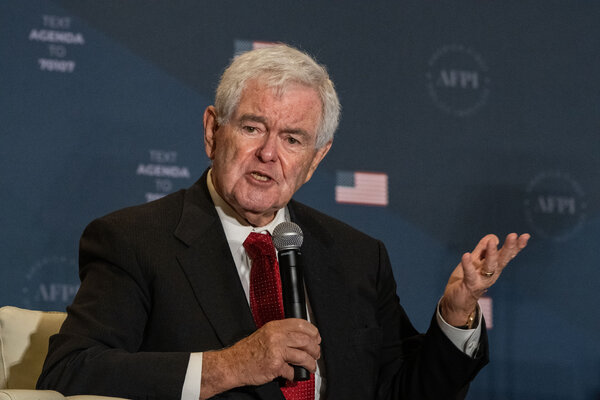 WASHINGTON — The House committee investigating the Jan. 6 attack on the Capitol on Thursday asked former Speaker Newt Gingrich to sit for a voluntary interview about his involvement in former President Donald J. Trump’s effort to overturn the 2020 election.

In a letter to Mr. Gingrich, the Georgia Republican who held the speakership in the late 1990s, the committee said its investigators had obtained evidence that he was in contact with senior advisers to Mr. Trump about television advertisements that amplified false claims of fraud in the 2020 election and other aspects of the scheme to block the transfer of power, both before and after a mob attacked the Capitol.

“Some of the information we have obtained includes email messages that you exchanged with senior advisers to President Trump and others, including Jared Kushner and Jason Miller, in which you provided detailed input into television advertisements that repeated and relied upon false claims about fraud in the 2020 election,” Representative Bennie Thompson, Democrat of Mississippi and chairman of the committee, wrote in a letter to Mr. Gingrich.

“These advertising efforts were not designed to encourage voting for a particular candidate,” Mr. Thompson added. “Instead, these efforts attempted to cast doubt on the outcome of the election after voting had already taken place. They encouraged members of the public to contact their state officials and pressure them to challenge and overturn the results of the election.”

The letter to Mr. Gingrich asked that he preserve all records and communications he had with the White House, Mr. Trump, the Trump legal team and others involved in the events of Jan. 6. It requested that he sit for an interview during the week of Sept. 19.

“The goal is to arouse the country’s anger through new verifiable information the American people have never seen before,” Mr. Gingrich wrote to Mr. Kushner, Mr. Miller and Larry Weitzner, a media consultant, on Dec. 8, 2020. “If we inform the American people in a way they find convincing and it arouses their anger, they will then bring pressure on legislators and governors.”

He also pushed for a coordinated plan to put forward pro-Trump electors in states won by Joseph R. Biden Jr.

On Nov. 12, 2020, Mr. Gingrich wrote to Mr. Trump’s chief of staff, Mark Meadows, and the White House counsel Pat A. Cipollone, asking: “Is someone in charge of coordinating all the electors?”

On the evening of Jan. 6, Mr. Gingrich continued to push efforts to overturn the election, emailing Mr. Meadows, at 10:42 p.m. after the Capitol had been cleared of rioters, asking if there were letters from state legislators about decertifying the results of the election.