The morning after Senator Kamala Harris became the first woman of color to take a debate stage as a member of a major party’s ticket, President Trump disparaged her as “totally unlikable” and a “communist.” Then, twice, he called her “this monster.”

There was the “condescending” label, too, that undecided voters applied to Ms. Harris’s facial expressions as they assessed the debate in a focus group run by a Republican pollster, Frank Luntz. There was the member of the Trump campaign’s advisory board who called her an “insufferable lying bitch.”

And there was the Fox News commentator Tucker Carlson’s depiction of her as a power-hungry usurper of Joseph R. Biden Jr.’s would-be presidency, which played to an old racist and sexist trope even as Mr. Carlson insisted his remark had nothing to do with her identity.

These sorts of personal attacks on Ms. Harris have been coming since the day Mr. Biden chose her as his running mate, when conservative commentators repeatedly mispronounced her name and suggested she wasn’t Black, and a top Google search around that time was whether she was born in the United States.

She was, in California. But the interest in that question — which evoked the birtherism lie that Mr. Trump weaponized against former President Barack Obama — spoke to how differently she was being treated than the white vice-presidential nominees who came before her.

Her selection as Mr. Biden’s running mate thrilled many Americans who saw themselves represented in a major presidential campaign for the first time. It also unleashed a steady drip of racism and sexism, underscoring not only the double standards women and people of color face, but what happens when multiple identities meet: a Black woman, an Indian-American woman, a woman whose parents were immigrants.

One of the oldest racist tropes is that of the “angry Black woman.”

It was popularized in the minstrel-like sitcom “Amos ’n’ Andy,” which included a character named Sapphire who became synonymous with the stereotype of an “emasculating” Black woman, said Nadia E. Brown, an associate professor of political science and African-American studies at Purdue University.

“Angry,” “mean,” “aggressive,” “disrespectful”: All of these words, which Mr. Trump has used to describe Ms. Harris, play to this stereotype, which was also used against Michelle Obama. False suggestions that Ms. Harris is scheming to run the country in Mr. Biden’s stead play to it, too.

“She’ll bulldoze her elderly, sentimental boss,” Mr. Carlson, the Fox News host, said Wednesday. “So tonight we’ll be airing the vice-presidential debate, but what we’ll actually be looking at is Kamala Harris’s audition for the presidency. That’s the office she’s running for, no matter what they tell you.”

The attacks on Ms. Harris as “unlikable,” which Mr. Trump pushed on Thursday, also play into a double standard. Voters are more likely to see likability as mandatory for women than for men, research shows, and experts say Black women are often judged even more harshly.

This is “the classic double bind,” said Amanda Clayton, a political scientist at Vanderbilt University. “Women can either be seen as leaders or they can be seen as feminine, and the two don’t go together.”

These caricatures and double standards have been accompanied by sexualization, common against women of all races but especially those who are Black. This is another racist trope, the promiscuous, hypersexual “Jezebel.”

After Mr. Biden chose Ms. Harris, the right-wing radio host Rush Limbaugh suggested falsely, quoting from a conservative website, that she had “slept her way up.” T-shirts with the slogan “Joe and the Hoe” were briefly available on Amazon. The mayor of Luray, Va., called her “Aunt Jemima,” a nod to yet another stereotype, the “Mammy.”

“These are distinctly misogynoir tactics,” Dr. Brown said, referring to the combination of racism and sexism that Black women face. “We would not see these stereotypes or these kind of threats used against her if she were not a Black woman.”

The lawyer and civil rights activist Kimberlé Crenshaw introduced the term “intersectionality” three decades ago to describe how various identities can overlap to produce discrimination more complex than just, for instance, racism plus sexism. Experts said Ms. Harris’s experience was a prime example.

Several activists and political scientists said they believed such attacks would backfire given voters’ increased awareness of double standards. But Professor Crenshaw, who teaches at Columbia Law School and the University of California, Los Angeles, said it was not necessarily that simple, because part of what makes intersectional bias so powerful is that prejudice against one identity can persist in communities of another identity. 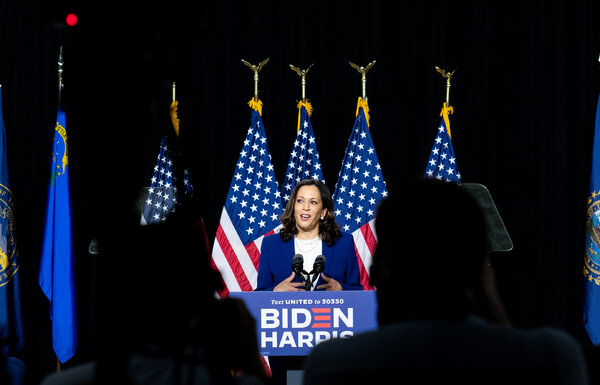 Within hours of Ms. Harris’s selection, the conservative talk-radio host Mark Levin went on a diatribe about descriptions of her as “the first African-American woman” on a major presidential ticket.

“Kamala Harris is not an African-American,” he said. “She is Indian and Jamaican. Jamaica’s part of the Caribbean. India is out there near China. I only point that out because if you dare raise that, you’re attacked, but the truth is she’s not, and so I just wanted to make that clear.”

There is nuanced debate within Black communities about what it means to be African-American versus Black. But it is common, including among Black people, to use the two interchangeably.

Comments like Mr. Levin’s are sometimes referred to as identity policing. Among other things, it suggests that Ms. Harris is not who she says she is or that she cannot have multiple identities, as millions of Americans do.

“She’s going to be tasked with managing those perceptions of her identity,” Danielle Casarez Lemi, a fellow at Southern Methodist University’s John G. Tower Center for Political Studies who focuses on race and representation, said after Ms. Harris was nominated. “And that’s time that could be spent on the ground, building relationships with people and formulating policies.”

Identity policing is related to broader patterns of “othering,” or casting a person as “not one of us.”

The most brazen example for Ms. Harris was the revival of the “birther” lie: A conservative law professor made a discredited argument in Newsweek in August that being born in California might not make Ms. Harris a natural-born citizen if her parents were not citizens, and Mr. Trump suggested falsely that this notion might be valid.

But the same tendency can be seen in smaller forms, like the frequent mispronunciations of her name and descriptions of her as inauthentic.

On Wednesday, denying that sexism or racism played any role in criticism of Ms. Harris, Mr. Carlson said on Fox, “More likely, voters don’t like Kamala Harris because she is a transparent fraud, from her phony inflected accent to her synthetic bio to her featherweight work history.” (Ms. Harris has been the district attorney of San Francisco, the attorney general of California and a United States senator.)

Mr. Trump, for his part, began calling her “phony” over the summer. This is one of his favorite adjectives for nonhuman opponents like the Russia investigation and the Emoluments Clause of the Constitution. But when used against a person, and especially a woman of color, experts say it has a harmful subtext.

“A word like ‘phony,’ neutral on its face, when leveled against a woman of color takes on a very culturally loaded meaning,” said Tina Tchen, chief executive of Time’s Up, which is part of the “We Have Her Back” coalition of groups formed to call out double standards related to Ms. Harris.

It speaks, Ms. Tchen said, “to this deeply held, internalized sense that we have in our culture that she’s a phony because she doesn’t belong here.”

President Trump, down by double digits in national polls, is attacking his enemies and even his aides. Joe Biden heads to Nevada today. Read live updates.