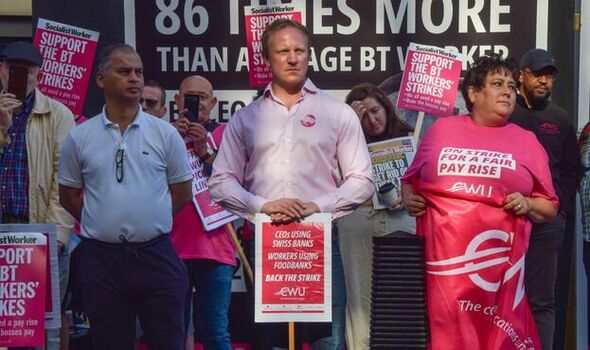 It came as it was revealed that Sir Keir’s refusal to back strikes could cost Labour vital trade union funding if there is a snap general election once the Conservative leadership contest is over.

Speaking to a Sunday newspaper, a senior union source warned: “There’s no way our members are going to allow us and the other unions to spend £10million of their money funding a campaign when we have no idea if Keir Starmer is even going to stand up for their interests.”

Mr Tarry’s sacking provoked a wave of anger, with Sir Keir coming under fire from all wings of his party. And last night Ian Lavery, the former Labour chairman, said Sir Keir was betraying the principles on which Labour was founded.

He said: “Sam Tarry stood up for the workers.”

“What Sam Tarry did is express the views of the people who founded the Labour Party, and we need principles.”

“The Labour Party was founded on the principles of the trade union movement to give workers a much-needed voice, and that’s still true today.”

“Sacking Sam Tarry gives the wrong signal to hard-working ordinary people that we are not on their side and I think it’s shameful.”

“People have had enough. With inflation as it is, the pay offer for many public sector workers is a kick in the teeth.”

Mr Tarry, a member of the Socialist Campaign Group, said: “We should never have been in a situation where we had an edict that you can’t join a picket line.

This is the Labour Party, the clue is in the name. We are the party founded by trade unions.” But he said: “I still believe Keir Starmer is absolutely the best person to become prime minister and I’ll campaign every day for a Labour government.”

He said the Labour Party needed a “fundamental recalibration” of its relationship with the trade union movement and needed to demonstrate it was on their side.

Former shadow chancellor John McDonnell said Sir Keir had made a “severe mistake”, adding: “I don’t know who is advising Keir Starmer, but this is a completely unnecessary row that’s been invented just at a time when the Tories are tearing themselves apart.”

The Labour leader was under fire from colleagues on the centre-left too.

Sir Keir defended the decision last week, saying Mr Tarry was sacked from the front bench because he “made up policy on the hoof”.