Kwasi Kwarteng grilled by Kay on his 'credibility'

Kwasi Kwarteng and Liz Truss have been put under intense pressure over the past week and a half as MPs threatened to vote down the mini-budget over the controversial decision to abolish the 45p tax rate. Mr Kewarteng on Monday was forced to announce a U-turn on the policy, sparking a new wave of questions after he and the Prime Minister both spent days defending the proposal as the right move to help boost the UK’s finances. And BBC Today host Nick Robinson had Mr Kwarteng confirm Ms Truss had backed the plan after she appeared to attempt to distance herself from the policy over the weekend.

Mr Robinson said: “The Prime Minister said it was a decision the Chancellor made to abolish the 45p rate. Does she mean it was your decision and not hers?”

Mr Kwarteng explained: “What she meant is that, historically in this country, the Chancellor of the Exchequer is responsible for public finance.”

The BBC presenter clarified his question: “Did she agree to the policy before you presented it?”

The Chancellor said: “Every budget is essentially done in the name of the Chancellor of the Exchequer. And I take full responsibility for that.” 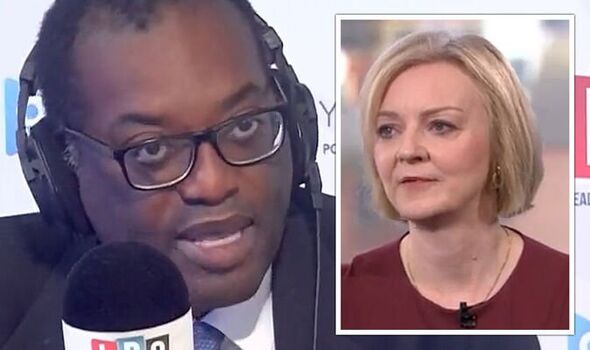 But Mr Robinson asked again: “Did the Prime Minister agree to the policy before you announced it?”

The BBC presenter once again clarified: “I’m not asking whether you now agree now. I’m asking did you get her backing for the 45p tax cut?”

The Chancellor said: “Of course, we work as part of the same Government.”