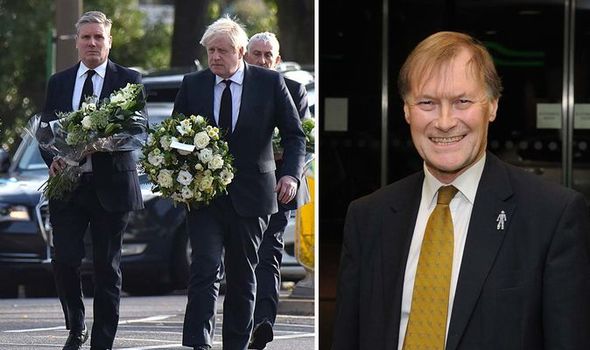 The gesture mirrors the one made by the Conservatives and Lib Dems in 2016 following the brutal murder of Labour MP Jo Cox by a right-wing extremist in her Batley and Spen constituency. A source close to Sir Keir Starmer told the Sunday Express: “We won’t be standing a candidate.”

A Lib Dem spokesman later added: “I can confirm we won’t be standing a candidate.”

The decision follows the brutal murder of Sir David Amess on Friday as he was performing his duties as MP meeting constituents in his surgery in Leigh-on-Sea part of his Southend West constituency.

The Essex MP was knifed 12 times according to reports in the Methodist Church where he was meeting constituents and died two hours later from his wounds.

The police have arrested a 25-year-old British man for the crime and declared it a terrorist incident.

The man is said to be of Somali heritage but born in the UK.

The decision by the main opposition parties not to stand a candidate against the Conservatives followed Sir Keir joining Home secretary Priti Patel, Prime Minister Boris Johnson and Speaker Lindsay Hoyle to lay a wreath at the scene of the murder this morning.

Ms Patel told reporters that MPs and British democracy “will not be cowed” by the tragedy.