As Ms Truss was announced as the new Prime Minister of the United Kingdom, with 81,326 votes to Mr Sunak’s 60,399, the rivals both stood up to a round of applause. But as Ms Truss was invited to come up to the stage to speak, she walked straight past Mr Sunak without offering him a consolatory handshake and ascended the stairs to the lectern. At a time when Conservative MPs from both side of the contest have highlighted the importance of unity in the party behind the new leader, football pundit and political commentator Gary Neville mocked the exchange, or the lack of, posting laughing emojis alongside the message “That Conservative unity started well by Liz Truss not shaking hands with Sunak and just racing past him”. Liz Truss will now spend the next two days preparing her new cabinet, as well as her first prime ministerial speech, travelling to Balmoral to be sworn in by the Queen on Tuesday, before then attending her first Prime Minister’s Questions on Wednesday as leader of the Conservative Party. 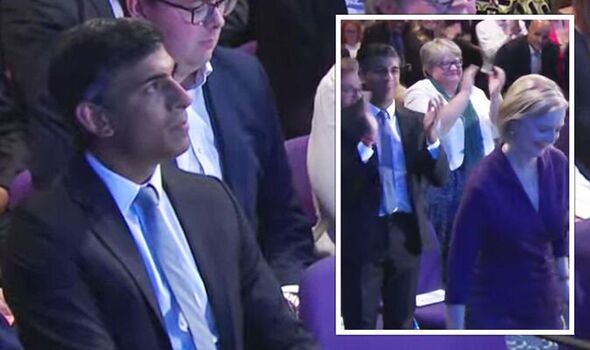 Speaking to the audience, Ms Truss said: “We need to show that we will deliver over the next two years. I will deliver a bold plan to cut taxes and grow our economy.

“I will deliver on the energy crisis, dealing with people’s energy bills, but also dealing with the long-term issues we have on energy supply.”

She added: “I would like to pay my respects to my Tory leadership rival candidates, especially Rishi Sunak. It has been a hard-fought campaign. I think we have shown the depth and breadth of talent in our Conservative Party.”

Mr Sunak sat quietly and nodded his appreciation towards the new Prime Minister while a muted round of applause swept through the room before Ms Truss launched into a message of thanks to the outgoing PM Boris Johnson.