Protests continued outside parliament and at New Scotland Yard as people demonstrated against the controversial Police, Crime, Sentencing and Courts Bill and the clashes at Sarah Everard’s vigil in London over the weekend. Chants of “sisters united” were heard at Parliament Square whereas officers were pelted with plastic bottles and other missiles at Scotland Yard. Arrests were made at the protest on Monday as tensions between police and protesters continue to boil over. 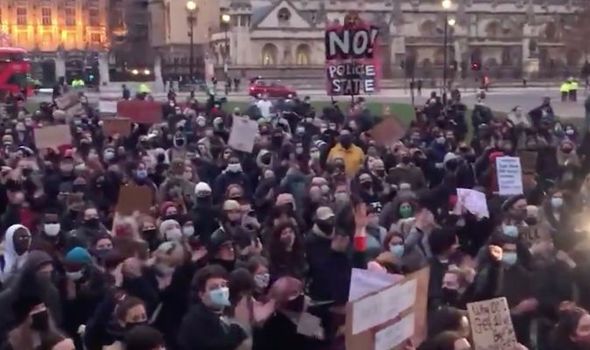 The protests focus on both the violent clashes between vigil attendees and police at the Sarah Everard vigil and the new police bill which cracks down on protests across the UK.

Arrests were made at the event with many criticising the heavy-handedness of the police and those in power.

London mayor Sadiq Khan and Met Police Commissioner Dame Cressida Dick were told to resign by many commentators after videos of the violence went viral.

Demonstrators have been protesting since Sunday against the treatment by the police.

But the protests exploded on Tuesday after hearing the police bill proposed by Home Secretary Priti Patel had passed its second reading in the House of Commons.

It will now go to the committee stage for review and scrutiny.