George Galloway hits out at Sturgeon for ‘promising freebies’

Sophy Ridge tore into Nicola Sturgeon’s hopes of leading an independent Scotland ahead of the upcoming May elections. The Sky News host pointed to the SNP’s “record in government” as she reeled off a number of Ms Sturgeon’s failures in power.  At one point, Ms Ridge told Ms Sturgeon to “just look at the facts”.

Ms Ridge said: “I’ve been keen in this interview to look back at your record in government because it matters.

“You are asking the Scottish people to trust you to lead an independent Scotland.

“You are clearly an exceptional communicator and have strong approval ratings.

“But, just look at the facts: record drug deaths after 14 years of an SNP government, still big inequalities when it comes education, the highest rate of care home deaths from Covid in the UK.

“Why should people trust you to lead an independent Scotland?”

JUST IN: Galloway savages Sturgeon for ‘promising freebies funded by the UK’ 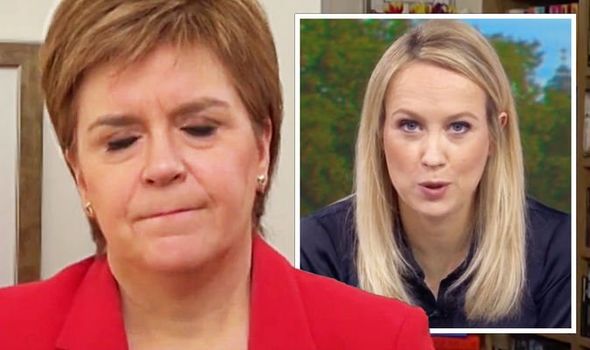 Nicola Sturgeon promised to provide a “transformational” increase in NHS funding if the SNP wins the election.

Speaking as she launched the SNP’s manifesto this week, Ms Sturgeon said frontline NHS spending would increase by at least a total of £2.5bn.

The SNP leader repeated her call for an independence referendum to be held within the next parliamentary term.

The manifesto also promises a £10bn investment programme in NHS facilities, and a minimum 25 percent rise in mental health spending.

Earlier this week, the Scottish First Minister became flustered during an awkward interview over Scottish independence.

A Channel 4 News reporter confronted the SNP leader on its economic cost, prompting Ms Sturgeon to claim all the forecasts were “completely out of date”.

Viewers branded the interview a “complete car crash” from the SNP’s perspective, pointing out the party leader appeared to “become flustered even by a gentle interview”.