The Brexit minister said trade arrangements were undermining the peace agreement and urged the bloc to be “pragmatic”. He told MPs that trade checks have left “businesses and a good proportion of society” feeling “anxious”. The peer said the EU’s threat in January to override part of the Brexit agreement on Northern Ireland to block shipments of Covid jabs had fuelled tensions. Lord Frost said the Northern Ireland protocol, designed to avoid a hard border, needs to be implemented in a balanced way.

He added: “If the way the protocol is operating is undermining the Good Friday Agreement rather than supporting it then we obviously have a problem.”

But he ruled out bowing to EU pressure for the UK to follow Brussels rules to solve the issue.

He said: “Obviously, from the EU’s point of view the easiest solution to any border problem is that we should just operate the same rules and laws as they do.

“That solves the problem but obviously that doesn’t work for us and that isn’t going to be the solution.

“That was obviously one of the big problems with the original backstop and everything that went with it, so we’re not going back there.” 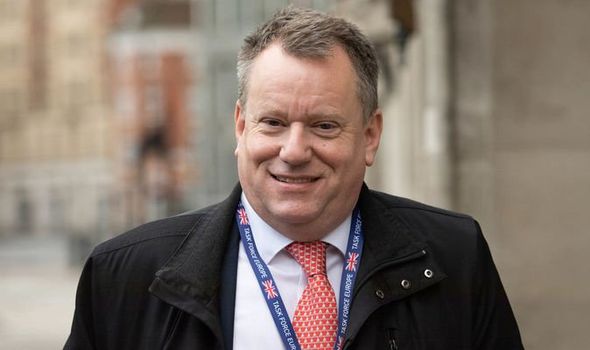 Lord Frost said the post-Brexit UK did not view itself as being within the European Union’s “regulatory orbit”.

He said: “One of the advantages we will get from Brexit is the opportunity to do things differently.

“I don’t think we should accept we are in the EU’s regulatory orbit for these purposes, we need to develop our own ways of doing things and our own philosophy behind it.”

The peer told the Commons European scrutiny committee he wants to get the relationship with the EU on to a “decent footing” but there is a long way to go.

He said: “I think it will be a bit bumpy for a time but there is a lot of business to be done.”