Eurovision result ‘probably to do with Brexit’ says Matthew Wright

In a furious outburst, the French President accused Downing Street of rowing back on its deal signed with Brussels. He said: “We reaffirmed our clear and simple wish to simply see the test and spirit of the agreement applied. Applied completely and in good faith. “The situation in which we find ourselves as regards our fishermen, as regards respect for our common market, and as regards the Irish border – today these are the subject of unilateral measures by the British, which do not respect the agreements.”

Mr Macron’s remarks come after EU leaders discussed the bloc’s future relationship with the UK for the first time since the trade pact was signed last December.

They agreed that Downing Street would be given little leeway in the wrangling over the Northern Ireland border despite warnings that the EU’s hardline stance could spark warfare in the region.

Instead, European Commission President Ursula von der Leyen blamed the Prime Minister’s pursuit of a hard Brexit for the recent spate of uncertainty in the province.

Both sides are in talks to ease tensions in Northern Ireland after a recent spate of rioting rocked the region. 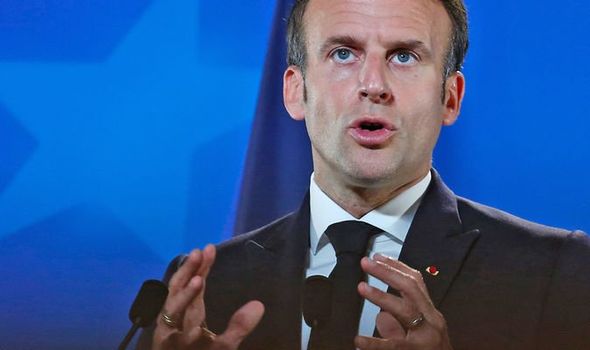 Brexit minister Lord Frost has called for the Protocol, designed to avoid a hard border, to be implemented in a balanced way.

He has warned the trade arrangements, which include customs controls between Northern Ireland and the rest of the UK, are undermining the peace agreement.

Downing Street has urged Brussels to be pragmatic, but insiders fear the bloc’s bureaucratic nature if preventing a compromise.

But EU leaders have snubbed calls for the Northern Ireland Protocol to be watered down.

Mr Macron added: “We will not in any case accept any weakness.

“We reiterated very clearly our desire to see the British accept what they have signed, recalling simply that if these situations are difficult to manage, it’s precisely because of Brexit and in no case because of the EU.”