WASHINGTON — On Jan. 4, the intelligence division of the United States Capitol Police issued a report listing all the groups known to be descending on the city and planning to rally for President Donald J. Trump two days later, such as the Prime Time Patriots, the MAGA Marchers and Stop the Steal.

The dispatch, a kind of threat matrix, gave low odds that any of the groups might break laws or incite violence, labeling the chances as “improbable,” “highly improbable” or “remote.” But the document, which was not previously disclosed, never addressed the odds of something else happening: that the groups might join together in a combustible mix, leading to an explosion of violence.

But just a day earlier the same office had presented a slightly more ominous picture. The Capitol Police’s intelligence division, which draws on information from the F.B.I. and the Department of Homeland Security, warned of desperation about “the last opportunity to overturn the results of the presidential election” and the potential for significant danger to law enforcement and the public.

The documents show how the police and federal law enforcement agencies produced inconsistent and sometimes conflicting assessments of the threat from American citizens marching on the Capitol as Mr. Trump sought to hold on to power. That lack of clarity in turn helps explain why the government did not bring more urgency to security preparations for a worst-case outcome.

But the decision in the face of muddled intelligence to take only limited measures to bolster security and prepare backup highlights another issue: whether, as some critics have long said, agencies that have spent two decades and billions of dollars reacting aggressively to intelligence about the potential for Islamic terrorism are similarly focused on the full array of threats from the homegrown far right.

“Since 9/11, law enforcement has followed a ‘no stone left unturned’ policy when there is even a scintilla of evidence that a Muslim supports terrorism and has routinely targeted social movements as terrorists,” said Faiza Patel, a director of the Liberty and National Security Program at the Brennan Center for Justice at the New York University School of Law. “But it has refused to take seriously the threat of far-right violent actors.”

Steven A. Sund, who resigned as the Capitol Police chief after Jan. 6, said in a previously undisclosed letter sent on Monday to congressional leaders that the “entire intelligence community seems to have missed” the warning signs.

In the case of the Capitol riot, Mr. Sund did make a request several days beforehand for National Guard troops, though it was denied at that time by his bosses, the sergeants-at-arms of the House and the Senate. The Capitol Police request at the time was driven primarily by the need to expand the security perimeter around the building because of the size of the anticipated demonstration and its possible duration — and not any intelligence warning that there could be an armed assault on the Capitol, according to a person familiar with the Capitol Police’s decision making.

There was never any discussion that the threat was sufficient that it should keep then-Vice President Mike Pence away from the Capitol on Jan. 6, current and former officials said. 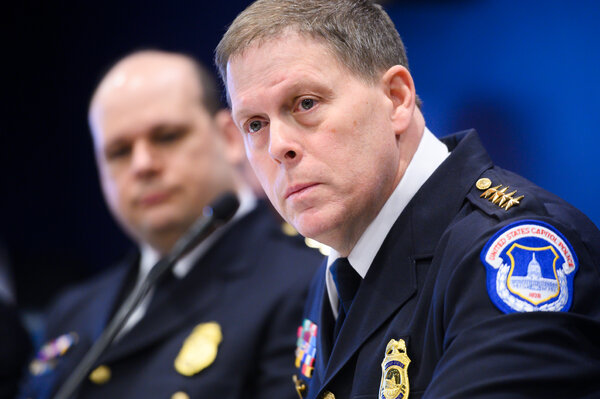 More generally, the F.B.I. has a considerable record of going after violent white supremacists, which the bureau still considers the most dangerous domestic terrorism threat. Last year, agents foiled a plot by a far-right militia to kidnap the governor of Michigan. The bureau also decided last year to elevate the threat posed by militias and other anti-government extremists, such as anarchists, several former law enforcement officials said.

But while there has been widespread support for an often heavy-handed approach to investigating potential Islamic terrorist plots, efforts to clamp down on far-right groups and movements have been more politically challenging.

Mr. Trump repeatedly portrayed the left-wing antifascist movement known as Antifa as the real danger to the United States and publicly criticized Christopher A. Wray, the F.B.I. director, for emphasizing the threat of right-wing groups instead.

In the weeks leading up to Jan. 6, numerous agencies predicted that white supremacists and armed militia members might gather in Washington. But in a meeting on Jan. 5 about the inauguration, no federal or local law enforcement agencies raised any specific threats of violence for the next day, according to people who attended the meeting.

Even as late as 1 p.m. on Jan. 6, as a pro-Trump mob began to breach the outer barricades around the Capitol, an agent in the F.B.I.’s domestic terrorism unit told a Justice Department official that the F.B.I. still had no information about any specific threat.

More than an hour later, the F.B.I. finally mobilized a tactical team that the bureau that had positioned near the Capitol, one of three that eventually responded that day.

When Mr. Sund pleaded for help from the National Guard after the breach of the barricades, the Pentagon was initially reluctant to approve the request, further slowing the deployment.

The result was to leave Congress remarkably vulnerable to a mob representing a far greater threat than the intelligence and law enforcement agencies had expected.

“Perfect hindsight does not change the fact that nothing in our collective experience or our intelligence — including intelligence provided by F.B.I., Secret Service, Department of Homeland Security (D.H.S.) and D.C. Metropolitan Police (M.P.D.) — indicated that a well-coordinated, armed assault on the Capitol might occur on Jan. 6,” Mr. Sund said in his letter.

Yet the failures came even after thousands of social media posts in the days before the assault, which documented how the rioters saw the Capitol — and the lawmakers certifying the election results — as a specific target. “Every corrupt member of Congress locked in one room and surrounded by real Americans is an opportunity that will never present itself again,” declared one post on Jan. 5.

Yogananda D. Pittman, the acting chief of the Capitol Police, told Congress last week that her force knew that militias and white supremacists would attend the rallies on Jan. 6, and that some participants would be armed. She confirmed that Mr. Sund had asked for support from the National Guard but was denied by members of the Capitol Police Board.

“We knew that there was a strong potential for violence and that Congress was the target,” Chief Pittman said. The department beefed up its defenses, she said, “but we did not do enough.”

The existence of an assessment on Jan. 3 was first reported by The Washington Post. The full document presents a mixed picture of the threat level that the police had envisioned for the rallies. The top of the document says “Bottom Line Up Front” and refers to the threat from white supremacists and potentially armed protesters but does not cite the Capitol as a target. Its analysis about possible violence comes at the end of the 15-page document.

Both the Jan. 3 and Jan. 4 intelligence assessments were provided to the Capitol Police leadership, according to person familiar with their distribution.

The riot inside the U.S. Capitol on Wednesday, Jan. 6, followed a rally at which President Trump made an inflammatory speech to his supporters, questioning the results of the election. Here’s a look at what happened and the ongoing fallout: