The former Ukip and Brexit Party leader has backed Suella Braverman and dismissed all of the other five candidates in the race, warning that they had not been clear on their policies on Britain in its relationship the with EU. He warned that a failure to outline policies on Brexit meant most candidates could not be trusted.

He said: “She’s the only one actually saying what needs to be done.

“She would take us out of the European Convention on Human Rights and the European Court of Human Rights, and then, and only then, has the Brexit promise been fulfilled,” Mr Farage said of Ms Braverman in a video on social media.

“She is the only one prepared to complete Brexit.” 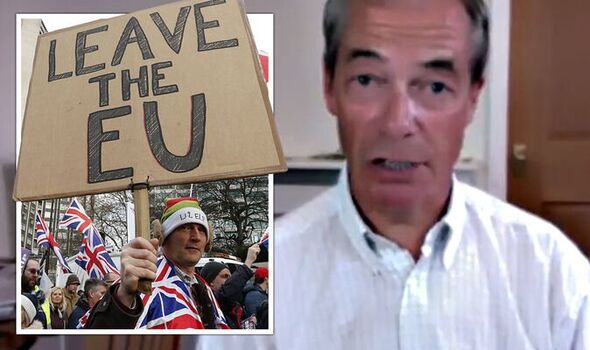 The current Attorney General has won the backing of a number of eurosceptics since launching her campaign last week.

Deputy leader of the European Research Group David Jones, the leader of the Tory party Commons Sense Group Sir John Hayes, and the infamous Steve Baker have all thrown their weight behind her.

She has surprised some of her rival candidates with the support she has received.

The Fareham MP has taken an uncompromising position on Brexit.

She said: “I’m the only candidate who can stop the small boats crossing the channel because I’m the only one who knows we need to leave the ECHR.

“The British people won’t forgive us unless we address this issue.”

DON’T MISS:
Next PM POLL: Who do YOU want to go out in today’s round of voting? [VOTE]
Liz Truss told to swing behind REAL Brexiteer Penny Mordaunt [WATCH]
Penny Mordaunt delivered huge blow by former boss Lord Frost [UPDATE] 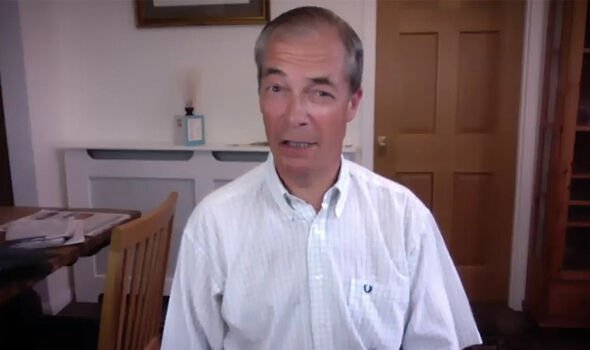 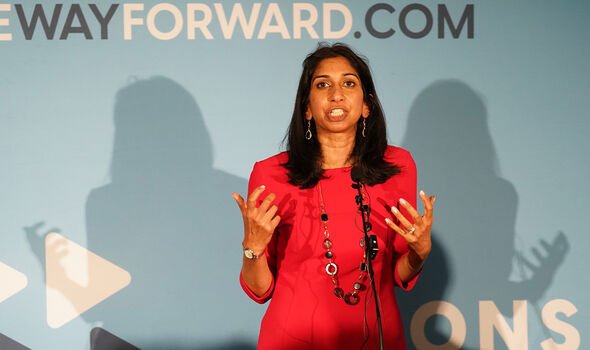 Launching her own campaign this morning, Liz Truss highlighted the deals she signed with countries around the world when Trade Secretary and vowed to stand up to the EU over the Northern Ireland Protocol in a pitch for the Brexiteer vote.

To shouts of “hear, hear” from her supporters, she said that it was time to deliver on Brexit and “win the fight for freedom, at home and abroad”.

There are fears among those on the right-wing of the party that the campaigns of Ms Truss, Ms Braverman and Kemi Badenoch will split the Brexiteer vote.

They worry it will lead to fewer hardline candidates making it into the final two of the leadership contest. 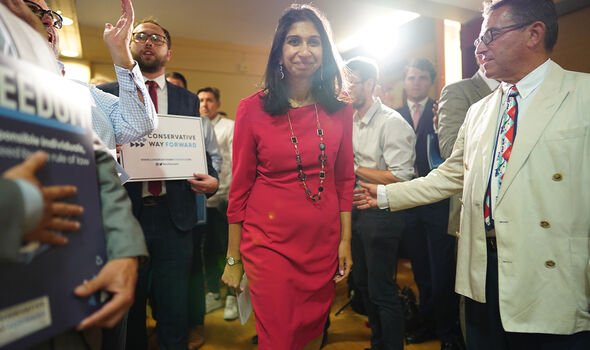 There is growing pressure from Ms Truss’s allies for Ms Braverman and Ms Badenoch to abandon their bids and throw their weight behind the Foreign Secretary.

Work and Pensions Secretary Therese Coffey told Sky News this morning: “The reason why I think that supporters of Suella and Kemi should come and join Liz is because a lot of their policies are in a very similar direction, about having a free economy, about making sure we stand up for the United Kingdom and be proud of our country.”

Despite the strong support for Ms Braverman, she is the most likely to be booted out of the leadership race this afternoon.

In the first round of voting yesterday she received the support of 32 MPs, the lowest number out of all of those who were successful in making it into today’s round.

The candidate with the least backing will be kicked out of the race after today’s vote.