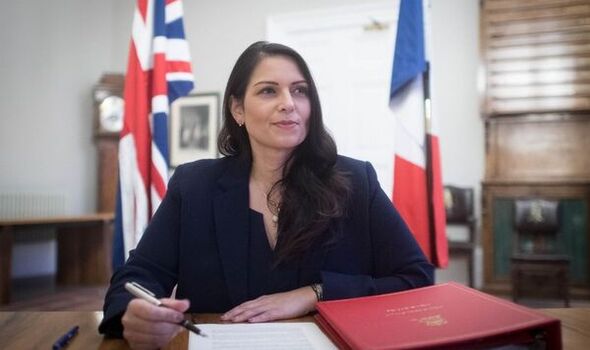 The Home Secretary has vowed that the legislation to be introduced on Tuesday will tackle “Russian dirty money” in Britain and inflict financial pain on supporters of Russia’s President.

A source close to the Home secretary said: “The UK is governed by the rule of law and our law enforcement agencies must be supported with strengthened powers to investigate and prosecute those corrupt Russian elites who are laundering money and assets in the UK.

“Russian elites who are abusing our financial systems will have no place to hide as our law enforcement agencies target those who are connected to the Kremlin, sending a message that dirty Russian money cannot be hid or laundered  in the UK.”

It comes as the international community announced a raft of further financial embargo and sporting boycotts around the world against Russia and its allies with the French seizing a Russian cargo ship in the English channel on its way to St Petersburg.

The cargo vessel, called The Baltic Leader, was transporting cars and “strongly suspected of being linked to Russian interests targeted by the sanctions,” said Captain Veronique Magnin of the French Maritime Prefecture.

The ship was diverted to the port of Boulogne-sur-Mer in northern France between 2am and 3am British time.

The vessel, which was flying a Russian flag, was mentioned in US Treasury reports which linked it to a Russian bank, Promsvyazbank Public Joint Stock Company (PSB).

“PSB was designated for operating or having operated in the defence and related materiel and financial services sectors of the Russian Federation economy,” the US Treasury said.

It was also targeted by EU sanctions.

The Russian embassy in France said yesterday that it is seeking an explanation from authorities over the seizure.

Ms Patel also kicked off a round of sporting boycotts by withdrawing the travel visa for the Bellarussian basketball team who were due to play in Newcastle today.

She Tweeted: “The UK will not welcome the national sports teams of those countries who are complicit in Putin’s unprovoked and illegal invasion of Ukraine.”

The Polish football team announced that it would not play its World Cup qualifier match against Russia for Qatar 2022.

Russia were due to host Poland in a game in Moscow on March 24, while the Ukraine national team were due to travel to Scotland on the same day.

Sweden and the Czech Republic joined Poland in a joint statement demanding that Fifa should not allow play-off games to take part in Russia.

Praising the decision to boycott the match, Polish football legend and Bayern Munich striker Lewandowski, 33, who is his country’s all-time highest goalscorer, said: “I can’t imagine playing a match with the Russian national team in a situation when armed aggression in Ukraine continues. Russian footballers and fans are not responsible for this, but we can’t pretend that nothing is happening.”

In more significant developments, the EU appeared to be close to finally agreeing that Russia should be removed from the crucial SWIFT banking payments system, cutting off financial transactions for its oil and gas.

Yesterday Hungary angrily denied that it was one of the countries blocking action on SWIFT and Italy withdrew its objections leaving the German government isolated in objecting to the move.

Asked about reports that Viktor Orban’s government had objected to removing Russia from SWIFT, Hungarian foreign minister Peter Szijjarto told the Sunday Express: “Be clear: This is not true! We have never spoken out, blocked or blocked anything against any sanctions proposal. Distributors of fake news, whatever their nationality, be ashamed!”

There has been criticism of Germany for allowing Putin to remove his £100 million yacht from its waters ahead of sanctions being imposed.

But Russia also found itself isolated with new measures banning travel by its aircraft through airspace over a group of European countries.

Transport Secretary Grant Shapps announced that Russian private jets would be banned from flying over the UK or landing in its airports.

He said: “Putin’s actions are unlawful and anyone benefiting from Russia’s aggression in Ukraine is not welcome here.

“I’ve strengthened our ban in the UK so that no Russian private jet can fly in UK airspace, or touchdown – effective immediately.”

Meanwhile, Estonia led the way with a ban of all Russian air flights over its airspace and was joined by Lithuania, Latvia, Poland, Bulgaria and the Czech Republic.

The Estonian Prime Minister Kaja Kallas called for an EU wide ban to be imposed.

She Tweeted: “Estonia is banning Russian airlines from our airspace. We invite all EU countries to do the same. There is no place for planes of the agressor state in democratic skies. #StandWithUkraine.”

On Tuesday the Home Secretary will introduce emergency legislation to Parliament which will contain measure to overhaul and reform the UK’s Unexplained Wealth Order Regime. (UWO)

The proposals are designed to enable law enforcement agencies to take more effective action against kleptocrats, compelling them to prove the origins of their funds in the UK. Those who are unable to demonstrate that wealth was obtained legitimately could see their properties being seized.

The new laws in the UK will fuel speculation that British authorities will go after Chelsea football club owner Roman Abramovich who has been named by Labour MPs as an ally of Putin’s.

Abramovich’s daughter Sofia has spoken out against the Moscow regime in a social media post where she replaced “Russia” with “Putin” on a statement which said “Russia wants a war with Ukraine.”

The Russian billionaire is believed to be worth £10 billion with properties in London and has recently completed his eighth superyacht The Solaris which is understood to have cost £430 million to build.

So far three Russian billionaires have been identified for sanctions and travel bans by the UK – Gennady Timchenko, 69, who controls the Volga Group and is worth £16 billion; Boris Rotenberg, 65, who founded gas-pipeline construction firm Stroygazmontazh; and his nephew Igor Rotenberg, 48, who holds a stake in drilling company Gazprom Bureniye.

They will increase the scope of powers available to law enforcement so that Unexplained Wealth Orders (UWOs) can be served on persons who are reasonably expected to have some form of control over the asset subject to the UWO.

This includes directors or officers of legal entities with day to day control over properties, including having access to records of property ownership, transactions, and property management costs.

The measures will also extend the time scale that Agencies have to review material relating to a UWO, thereby alleviating time pressures on agencies and facilitating better decision-making.

Finally, they will protect law enforcement agencies by providing them with new legal powers to use UWOs and prevent them from incurring substantial legal costs if they use the powers reasonably to apply for and obtain UWOs.

This will, according to Home Office sources, remove a key barrier around risk appetite which prevents use of the powers and will empower law enforcement to take on riskier cases.