WASHINGTON — At a panel discussion this past week, David Malpass, the World Bank president, described climate change as an “immense” issue for the globe and talked about the need for nations to transition away from coal.

“A lot of countries have coal miners that are dependent on coal, and yet the world knows that there needs to be a way to a better future on that,” Mr. Malpass said during a conversation with Treasury Secretary Janet L. Yellen and Kristalina Georgieva, the head of the International Monetary Fund, at the annual spring meetings of the I.M.F. and the World Bank.

Such a comment from Mr. Malpass, who was selected for the job by former President Donald J. Trump, would have been startling just a year or two ago. These days, with the Biden administration seeing climate change as an existential threat, Mr. Malpass has refashioned himself as an environmentalist, giving speeches about “green growth” and a net-zero carbon future.

The transformation reflects the changing political winds in Washington — one that could have important consequences if the World Bank can resume its central role in the fight against climate change, which stalled during the Trump years.

World Bank officials were worried when Mr. Malpass, a former senior Treasury Department official, was selected in 2019 for a five-year term. Mr. Trump once donned a hard hat and promised to bring coal jobs roaring back to the United States. Mr. Malpass was viewed as a loyalist.

Coming from an administration that did not believe the science behind climate change put Mr. Malpass in an awkward position. While seeking support from World Bank donor countries for the role, he said he would maintain the bank’s climate commitments, but he treaded carefully when discussing the causes of global warming. In public comments early in the job, Mr. Malpass focused on the global economy and debt transparency, frustrating the bank’s climate experts, who thought he was overlooking the environment, people familiar with the matter said.

“We were a little bit nervous about what we were getting,” said Daniel Sellen, chairman of the World Bank’s staff association. “Staff had quite a bit of trepidation about who the Trump administration would nominate to this role.”

Mr. Trump loathed multilateral institutions and took pleasure in installing leaders to agencies that they could deconstruct. He tapped Mr. Malpass at the encouragement of his Treasury secretary, Steven Mnuchin, a pragmatist who saw Mr. Malpass as a safe selection who could steer the bank back toward its original mission of fighting poverty.

But out of Mr. Trump’s shadow, and with President Biden making combating climate change a top priority, Mr. Malpass has changed his tone.

These days, he tends to pepper his speeches and conversations with bank officials with concern about the environment. It remains a core issue for the World Bank even as it races to help developing countries cope with the coronavirus pandemic and deploy vaccines. And now that the United States, the World Bank’s largest donor, is rolling out more plans to curb emissions and assess climate change’s risks to the financial system, Mr. Malpass must ensure that the bank is keeping pace.

“The Biden administration has made it clear they expect the World Bank to be helpful and leading, and the largest shareholders of the World Bank are all politically aligned and need the bank to be playing a leadership role,” said Rachel Kyte, the World Bank’s former vice president and special envoy for climate change.

“The world doesn’t need Malpass to be Bono or Jim Kim on climate,” she added, referring to the activist rock star and Mr. Malpass’s predecessor. “It needs him to make the World Bank Group an instrument of change.”

Ms. Kyte said that in recent years, other multinational development banks had shown more ambition than the World Bank on climate policy and that it was a pivotal moment for the World Bank to reassert itself.

On Wednesday, the bank tried to take a step in that direction, unveiling its Climate Change Action Plan, which pledges that 35 percent of World Bank financing will have climate co-benefits over the next five years, and that 50 percent of World Bank climate financing will support “adaptation and resilience.” The bank also committed to fully aligning its financing objectives with the 2015 Paris climate agreement by 2023. 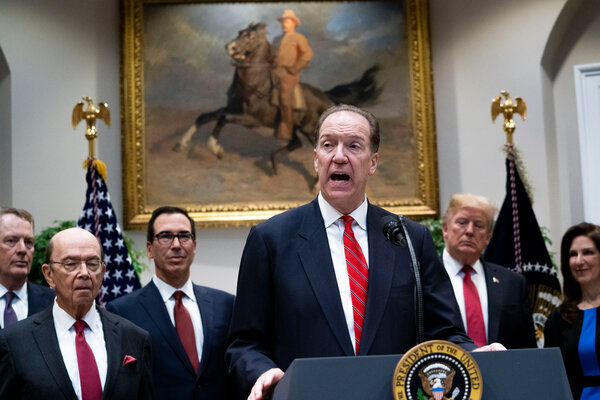 The plan was met with praise but also some disappointment that 35 percent was too low, given the scope of the climate threat. The World Bank also stopped short of halting all funding of fossil fuel projects.

In an interview this past week, Mr. Malpass defended his record on climate policy and dismissed the idea that he has made a sudden shift to climate activism.

“I tried to speak clearly from the very first, when I joined the bank, on the importance of climate change issues within the development agenda,” Mr. Malpass said, pointing out that he has a long record of working on development issues.

Mr. Malpass, 65, called the new climate action plan a robust investment, noting that it commits $100 billion over five years in additional financing to substantially reduce carbon emissions in both advanced and developing economies.

The bank is also planning to work with developing countries on debt relief initiatives that would encourage them to shift away from fossil fuels, Mr. Malpass said.

Critics have complained that Mr. Malpass has yet to articulate a broad vision for the bank, yet he has been operating for most of his tenure in crisis mode.

The World Bank is racing to help developing countries emerge from a pandemic that is expected to push 150 million people into extreme poverty by the end of this year. Mr. Malpass has won praise for advocating for poor countries and pushing money out the door, but faces a daunting challenge to ensure that poor countries have access to vaccines that advanced economies have been hoarding.

Mr. Malpass has ingratiated himself with World Bank staff with his steady, low-key approach and congenial manner. He has also benefited from low expectations. But with three years left to go in his term, some development experts want to see more.

Scott Morris, a senior fellow at the Center for Global Development, a Washington think tank, said it was unfortunate that the World Bank appeared to be leaving the door open for funding fossil fuel projects. He suggested that Mr. Malpass still had yet to lay out a clear strategic vision for the bank, but credited him for embracing climate change.

“It is remarkable to compare his statements today with his positions as a Treasury official in the Trump administration two years ago, when the official position was to strike the word ‘climate’ from any multilateral institution’s documents,” Mr. Morris said. “By that standard, he’s made a remarkable evolution toward being a climate leader.”

He added: “But it is a question of compared to what, and is he up to the task of being the leader of this critical institution for climate finance?”

The bank will accelerate its efforts in the coming months. Mr. Malpass, in a speech last month about “building a green, resilient and inclusive recovery,” said his team was integrating climate into all of the bank’s country strategies and would complete climate and development reports for 25 countries this year.

Mr. Malpass has more recently been working to curry favor with the Biden administration. He speaks regularly to Ms. Yellen and personally invited her to participate in the climate discussion this past week.

Asked what the transition from the Trump administration to the Biden administration had meant for the bank, Mr. Malpass answered carefully. He noted that under Mr. Trump, the United States had approved a capital increase for the bank. He said the new White House team was highly committed to the bank’s goals of reducing poverty, making food accessible and preparing countries for a changing climate.

“The Biden administration policies have been very supportive of that mission,” Mr. Malpass said.