Violent clashes erupted between pro-Palestinians activists and counter-demonstrators in London amid a fresh conflict between Israel and militants in the Gaza strip. Thousands took to the streets of the capital on Tuesday following the death of at least 40 people in Israeli airstrikes on the Palestinian enclave and Hamas rocket fire toward Israel. Tensions at the march saw police move in to separate protestors at the “Free Palestine’ rally as scuffles broke out.

At one point a  line of police was formed to hold back a large crowd of activists waving Palestinian flags and placards emblazoned with “Free Palestine” as they marched past Downing Street.

Tensions reportedly escalated when officers attempted to escort a small number of pro-Israeli demonstrators away from the main march.

Images captured by Ruptly show police yelling at the protestors to “get back” as the pro-Israeli activists are rushed away from the scene. 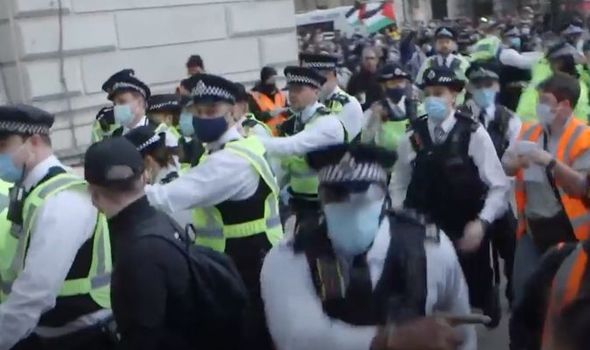 At one point a separate video of the incident appears to show a masked demonstrator deliberately leap from a window ledge onto the head of one of the pro-Isreali counter-protestors.

The man had to then be wrestled away by a police officer. The violent scenes came as the Israeli military struck at militants in the Gaza strip following rocket fire by the Hamas.

Tensions between Isreal security forces and Palestinians in East Jerusalem have worsened over recent days following sporadic clashes around the Old City.

The conflict escalated on Tuesday evening when Hamas and other armed groups fired hundreds of rocker salvos at cities across southern Israel. 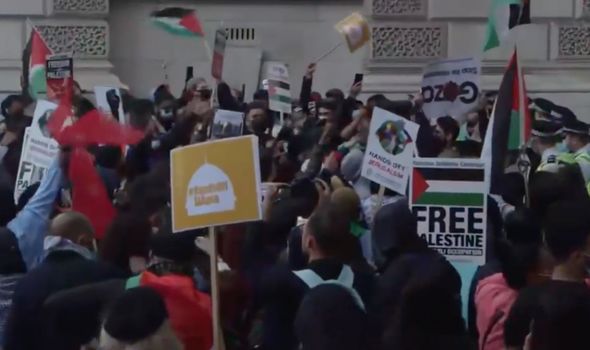