The move amounts to a gamble that liberals who have balked at allowing the infrastructure bill to move on its own will support it in a vote on Thursday. 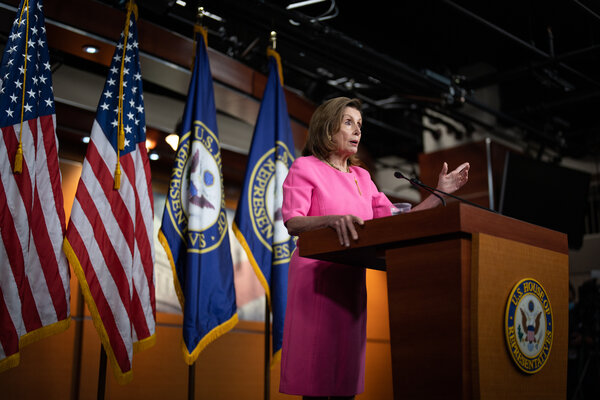 WASHINGTON — Speaker Nancy Pelosi of California signaled to Democrats on Monday that she would push ahead with a vote this week on a $1 trillion bipartisan infrastructure bill, pushing to salvage President Biden’s agenda in Congress even as the party remained divided over a broader social safety net measure.

Progressive lawmakers have long warned that they will not vote for the infrastructure legislation, which the Senate passed last month, until a far more expansive $3.5 trillion domestic policy and tax package also clears the chamber.

But in private remarks to her caucus on Monday evening, Ms. Pelosi effectively decoupled the two bills, saying that Democrats needed more time to resolve their differences over the multitrillion-dollar social policy plan. The move amounted to a gamble that liberals who had balked at allowing the infrastructure bill to move on its own would support it in a planned vote on Thursday.

It also left unclear the date of the more costly social safety net package, which Democrats are pushing through using the fast-track reconciliation process to shield it from a Republican filibuster. But with slim margins of control in both chambers, Democratic leaders must keep all their senators united in favor, and they can afford to lose as few as three votes in the House.

Ms. Pelosi said her shift in strategy came only after it became clear that Democrats would have to shrink the size of the reconciliation package from $3.5 trillion. Mr. Biden has been negotiating privately with conservative-leaning Democrats to settle on a final number. The speaker outlined her new approach after speaking with the president and Senator Chuck Schumer of New York, the majority leader, as the three worked to unite their members behind the details of the package.