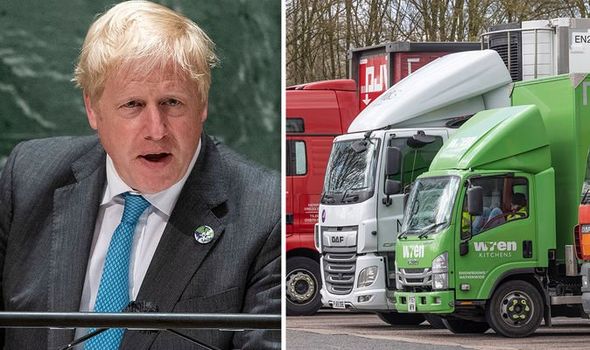 On a day of chaos across the UK, with drivers panic-buying fuel and fears of empty shelves in supermarkets, the Government published details of its plan to end the shortage of HGV drivers. With warnings that Christmas festivities could be cancelled and the UK might enter “lockdown by default”, ministers emphasised that they did not want a repeat of last year when coronavirus restrictions forced an end to the seasonal celebrations.

Transport Secretary Grant Shapps said: “After a very difficult 18 months, I know how important this Christmas is for all of us and that’s why we’re taking these steps at the earliest opportunity to ensure preparations remain on track.”

The measures include a temporary relaxation of visa restrictions to allow 5,000 lorry drivers and 5,500 poultry workers from the EU to get employment in the UK until Christmas.

Meanwhile, up to 4,000 people will be trained as new HGV drivers to help tackle skills shortages and support more people to launch careers within the logistics sector.

The package includes using MOD examiners to help increase immediate HGV testing capacity by thousands over the next 12 weeks.

Additionally 200 military personnel are to be drafted in as HGV drivers, a number which could increase tenfold to 2,000.

It is not the first time Army lorry drivers have been used for a civilian emergency.

Two years ago Michael Gove put 1,600 on standby to drive a fleet of tankers amid fears of shortages after Brexit.

A military source added: “We have a plan and can deliver around an initial 2,000 personnel, but no one in government has yet made a decision.”

The million letters to qualified lorry drivers are aimed to boost the morale of HGV drivers and point out that they make a valued contribution to the country.

They will specifically thank them for their vital role in supporting our economy, and to encourage those who have left the industry to return.

The letter, which will arrive on doormats over the coming days, sets out the steps the road haulage sector is taking to improve the industry, including increased wages, flexible working and fixed hours.

Mr Shapps said: “This package of measures builds on the important work we have already done to ease this global crisis in the UK, and this Government continues to do everything we can to help the haulage and food industries contend with the HGV driver shortage.

“We are acting now but the industries must also play their part with working conditions continuing to improve and the deserved salary increases continuing to be maintained in order for companies to retain new drivers.”

The Department for Education (DfE) is investing up to £10million to create new Skills Bootcamps to train up to 3,000 more people to become HGV drivers.

The free, short, intensive courses will train drivers to be road ready and gain a category C or Cat C&E license for HGVs.

An additional 1,000 people are expected to be trained through courses accessed locally and funded by the government’s adult education budget.

Education Secretary Nadhim Zahawi said: “As we build back from the pandemic we’re committed to supporting people, no matter their background, to get the skills and training they need to get good jobs at any stage of their lives, while creating the talent pipeline businesses need for the future.”

Fuel tanker drivers need additional safety qualifications, which the Government has said it will work with industry to ensure drivers can access as quickly as possible.

To help make sure new drivers can be road ready as quickly as possible, the Department for Transport (DfT) has also agreed to work with Driver and Vehicles Standards Agency (DVSA) to ensure that tests will be available for participants who have completed training courses as soon as possible.

The Government denied claims that the crisis was caused by Brexit and said it is a global issue made worse by Coronavirus.

The UK currently has a 100,000 shortfall, of which 20,000 was caused by EU workers leaving the UK after Brexit. The balance has been exacerbated by low wages ‑ which are now rising ‑ and a backlog of tests caused by the Covid pandemic.

Last night the Government said it has already taken a range of steps to support the industry, including streamlining the process for new HGV drivers and increasing the number of driving tests.

The measures provided a rapid increase in capacity and allowed for an extra 50,000 tests to take place per year.

Environment Secretary George Eustice said: “It is a top priority to ensure that there are enough workers across the country’s supply chains to make sure they remain strong and resilient.

“We have listened to concerns from the sector and we are acting to alleviate what is a very tight labour market.”

But critics including the Confederation of British Industry (CBI), claimed that the crisis with lorry drivers and shortages of labour in other sectors should have been predicted earlier.

The head of the CBI has warned that the shortage of lorry drivers is indicative of much wider problems in the economy.

“All parts of the economy at the moment are suffering from a pile of problems that are stopping us getting the economy moving. So, we need to roll up our sleeves and solve them.”

However, Conservative MPs have said that the crisis has underlined why people voted for Brexit and warned that lorry drivers and other sectors need better pay and conditions instead of cheap labour from abroad.

Dudley North Conservative MP Marco Longhi said: “I’d be reluctant to effectively do what we did before and try to plug a gap in a cheap and cheerful way. That would be a stopgap situation and to my mind what you’re doing is potentially taking drivers away from a country that desperately needs them because ‑ to be clear ‑ every other country is going through a shortage of lorry drivers.”

The measures announced last night have been welcomed by business leaders.

The Food and Drink Federation’s chief executive Ian Wright said: “This is a start but we need the Government to continue to collaborate with industry and seek additional long term solutions.”

Elizabeth de Jong, Logistics UK’s director of policy, said: “We are also delighted that DfT has agreed to jointly send nearly one million letters to all drivers who currently hold an HGV driving licence. With fantastic HGV driving opportunities available in the logistics industry, now is the perfect time to consider returning to the occupation.”

NFU Vice President Tom Bradshaw said: “Following our letter to the Prime Minister earlier this week, in which we asked him to urgently implement a Covid Recovery Visa to alleviate labour shortages, we welcome the announcement to add HGV drivers and poultry workers to existing visa schemes.

“We will also continue to work with government to find solutions for the wider labour needs, including trained and able butchers for pork production to deal with the increasingly serious build-up of pigs on farm and the risk of welfare issues.”