March 2020 His failure to contain a deadly pandemic would overtake his
re-election campaign.

October 2020 He has staked his path to a second term entirely on his political base.

This was not the 2020 that President Trump had envisioned for himself.

The year began with Mr. Trump embroiled in a monthslong impeachment proceeding, which scrutinized his pressure campaign on the president of Ukraine to investigate his political rivals at home. That was, in retrospect, the easy part of the year.

From the Democratic primary race emerged perhaps the trickiest opponent for him — Joseph R. Biden Jr., a centrist with moderate appeal. A pandemic killed more than 230,000 people in the United States and devastated the economic gains that were to serve as his main argument for re-election.

But Mr. Trump was already holding rage-filled campaign rallies in January, warning that Democrats’ efforts to remove him from office were designed to “nullify the ballots of tens of millions of patriotic Americans.” 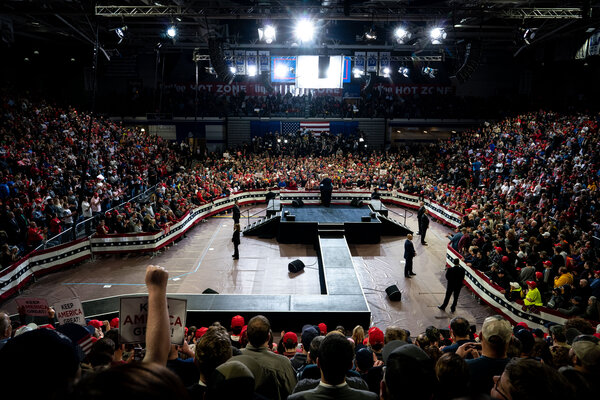 Assured acquittal by the Republican-led Senate, Mr. Trump used his State of the Union address to make the case for a second term. The most memorable moment of the evening was delivered by Speaker Nancy Pelosi, who ostentatiously ripped up her copy of the president’s speech at its conclusion. And Republican lawmakers’ cheers of “Four more years!” made it clear that both parties were interested in creating a partisan spectacle.

The Senate, divided almost entirely along party lines, acquitted Mr. Trump of charges that he abused his power and obstructed Congress to aid his own re-election. The president hailed it as a victory, calling the entire impeachment “corrupt.”

He returned to the campaign trail, often visiting states where Democrats were holding primary contests.

Mr. Trump downplayed the risks of the coronavirus as it began to take hold in February. In an Oval Office address in March, he struggled to acknowledge the deepening crisis while continuing to diminish its threat to the country’s future. He described it ominously as a “foreign virus,” blaming China and Europe.

The coronavirus task force briefings were originally led by Vice President Mike Pence. But Mr. Trump quickly took over, turning them into daily aggressive defenses of his own response to the pandemic. He was persuaded to halt the briefings after seeing a drop in his poll numbers, but the pause would only be temporary

In April, Mr. Trump tweeted “LIBERATE MICHIGAN!” and “LIBERATE MINNESOTA!” — encouraging his supporters to protest coronavirus restrictions imposed by Democratic governors. His appeal to his base furthered partisan divisions on the pandemic response.

After George Floyd, an unarmed Black man, was killed in the custody of the Minneapolis police, protests against racial injustice spread throughout the country. A chemical spray and rubber bullets were used to clear peaceful protesters from Lafayette Park, in front of the White House, so that Mr. Trump could stage a photo op at a nearby church that had been vandalized days before.

The Trump campaign hyped a June rally in Tulsa, Okla., as the president’s triumphant return to the stump. Though the campaign claimed that nearly one million people had registered for tickets, Mr. Trump spoke in front of a mostly empty arena. It was a sign that even his own supporters were frightened of the coronavirus, despite his repeated attempts to dismiss it.

Standing in front of Mount Rushmore just before the Fourth of July, Mr. Trump used an official presidential address to wage a culture war against a straw-man version of the left that he portrayed as inciting mayhem and moving the country toward totalitarianism.

He tried to position himself as the candidate of law and order, claiming that “angry mobs” wanted to tear down statues of the nation’s founders and “unleash a wave of violent crime in our cities.”

The first coronavirus outbreak in the spring hit hard in Northeastern cities and spots on the West Coast, but a second surge in the summer spread across a wider portion of the country. Hospitals fought to contain the surge.

After moving the location of the Republican National Convention twice, Mr. Trump eventually decided to deliver his renomination speech from the South Lawn of the White House in August.

His campaign maintained that holding the premier political event of the presidential race on government property was not a violation of the Hatch Act. But the event symbolized a final demolition of the boundary between governing and campaigning that the president had been eroding for years.

The day after Justice Ruth Bader Ginsburg died in September, Mr. Trump and Senator Mitch McConnell, the majority leader, were already in contact with Judge Amy Coney Barrett about filling the opening on the Supreme Court. Two days later, they offered her the nomination.

Mr. Trump hosted Judge Barrett, her family and Republican lawmakers at the White House for a formal announcement ceremony the next weekend. There was no social distancing and few wore masks.

Less than 48 hours after the debate, Mr. Trump announced on Twitter that he and the first lady, Melania Trump, had tested positive for the coronavirus. He was taken to Walter Reed National Military Medical Center, where he remained for three days. The White House physician, Dr. Sean P. Conley, delivered confusion and obfuscation with his updates on the president’s condition.

Upon his return to the White House, Mr. Trump was unrepentant about his efforts to play down the virus. “Don’t let it dominate your lives,” he urged Americans.

Mr. Trump roared back to the campaign trail after his recovery. In the final weeks of the race, as the number of coronavirus cases skyrocketed nationwide, his leading message to supporters was to trust him that the worst of the pandemic was over. He railed against the news media for continuing to cover the health crisis.

Mr. Trump’s advisers persuaded him to tone down his performance in the second and final debate. Even though he played nicer with the moderator and let Mr. Biden speak, he did little to change the trajectory of the race or to toggle the focus away from his handling of the pandemic.

Eight days before the election, Mr. Trump won confirmation of his third Supreme Court justice. He immediately hosted a nighttime ceremony on the White House lawn to swear in Ms. Barrett. The outdoor gathering was a mirror image of the potential superspreader event he held a month earlier to announce her nomination.

In the closing days of the campaign, Mr. Trump barnstormed the country as if the virus that defined much of his year did not exist. His lagging position in the polls was evident in his grueling travel schedule, which had him seeking to shore up votes in states that he won in 2016, with up to five stops a day.

Instead of focusing his closing argument on the economy, he accused doctors of fabricating coronavirus cases in order to make money, complained about the bitter cold in states like Michigan, and hinted he wanted to fire Dr. Anthony S. Fauci, the nation’s top infectious disease expert. His last stop before Election Day was Michigan, a repeat of his travel schedule four years ago.