Dr. Rachel Levine, President Biden’s pick to be assistant secretary for health, made history on Wednesday by becoming the first openly transgender person confirmed by the Senate to a federal position, and immediately vowed to “promote policies that advance the health and well-being of all Americans” and to fight for transgender youth.

The Senate vote, 52 to 48, followed a contentious confirmation hearing that became a flash point in the battle over transgender rights. Dr. Levine, a pediatrician and former health secretary in Pennsylvania, will assume her post at the federal Health and Human Services Department at a challenging time, just as Mr. Biden is trying to lead the country out of the coronavirus crisis.

In a statement shared with The New York Times, Dr. Levine said she was “humbled” by the Senate’s approval and thanked the L.G.B.T.Q. community for its support.

“As Vice President Harris has said, I recognize that I may be the first, but am heartened by the knowledge that I will not be the last,” she wrote. “When I assume this position, I will stand on the shoulders of those who came before — people we know throughout history and those whose names we will never know because they were forced to live and work in the shadows.” 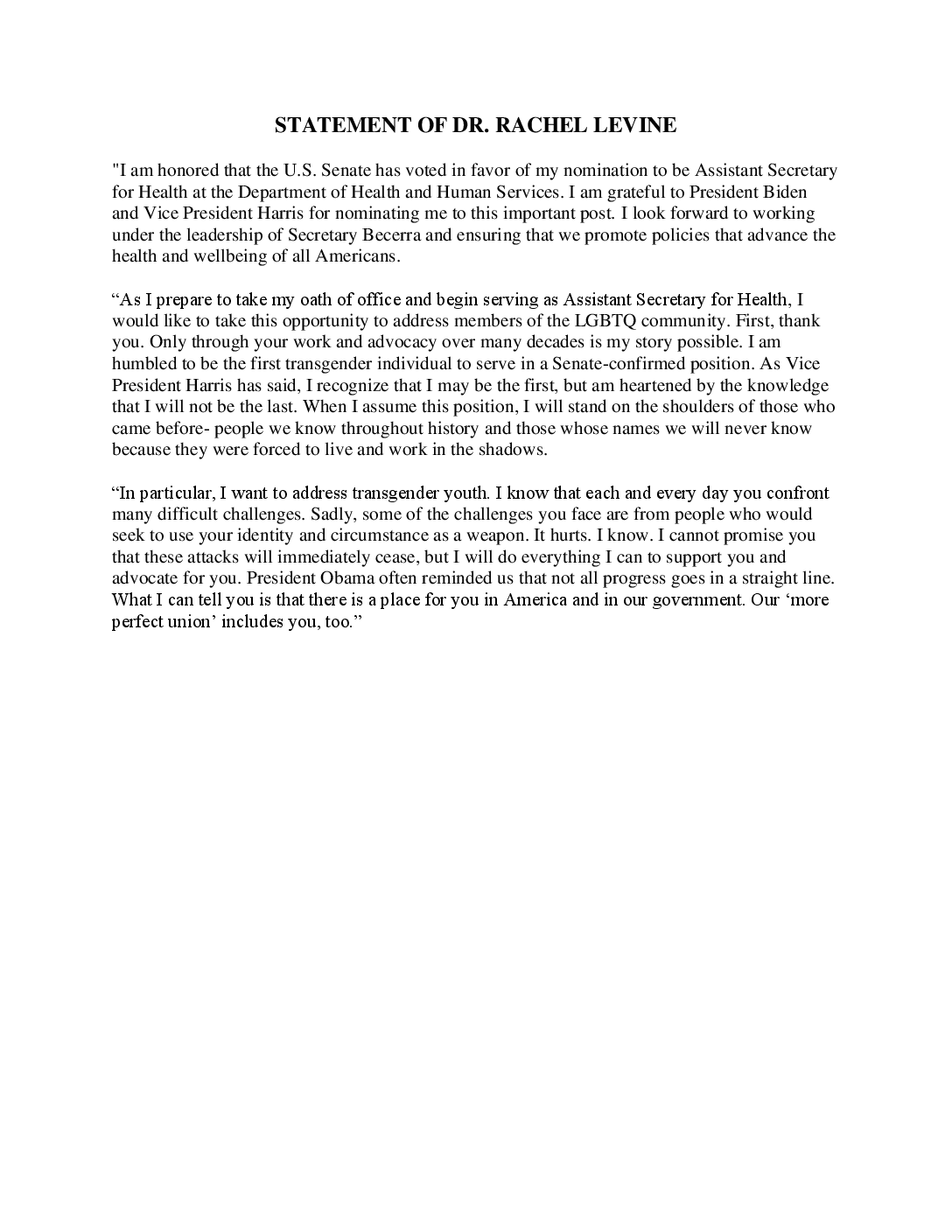 She said she wanted to address transgender youth in particular.

“I know that each and every day you confront many difficult challenges,” she wrote. “Sadly, some of the challenges you face are from people who would seek to use your identity and circumstance as a weapon. It hurts. I know. I cannot promise you that these attacks will immediately cease, but I will do everything I can to support you and advocate for you.”

At her confirmation hearing before the Senate Health Committee, Dr. Levine was the subject of a tirade by Senator Rand Paul, Republican of Kentucky, who likened sex reassignment surgery to “genital mutilation” and demanded to know whether she supported such procedures for minors.

Her response — that transgender medicine is “a very complex and nuanced field with robust research and standards of care” — drew plaudits from Democrats who praised her for maintaining her calm, but criticism from conservatives who accused her of being evasive.

In a recent interview, Roger Severino, a champion of social conservative causes who ran the Health and Human Services Department’s civil rights office under President Donald J. Trump and met with Dr. Levine when considering whether to roll back transgender protections, called her a “divisive pick that goes contrary to President Biden’s promise of unity.”

But advocates for the L.G.B.T.Q. community were elated on Wednesday.

“At a time when hateful politicians are weaponizing trans lives for their own perceived political gain, Dr. Levine’s confirmation lends focus to the contributions trans people make to our nation and deflates absurd arguments calling for their exclusion,” said Annise Parker, a former mayor of Houston who now runs the L.G.B.T.Q. Victory Institute, which trains L.G.B.T.Q. people to run for public office.