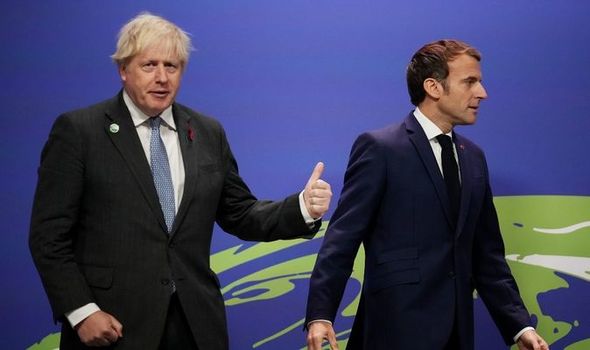 The French president had accused Boris Johnson of not being “serious” after the PM revealed on Twitter details of a letter he wrote to Mr Macron, detailing his plan to stop migrants leaving France for the UK.

It followed the deaths of 27 people during a bid to cross the Channel on Wednesday.

A Whitehall source said of the French: “Are they really going to let people keep drowning because of a tweet? Everyone now needs to come together, stop this tit for tat and work on how we can stop people dying.”

He said: “The French have got to get real and recognise there are consequences from turning a blind eye rather than stopping the migrant boats at source, and those consequences are tragedies like the one two days ago.

“Partnership is the only way to find a solution, not petulance.”

France’s interior minister Gerald Darmanin will host the meeting, to be attended by counterparts from Belgium, the Netherlands and Germany plus representatives of the European Commission.

Mr Macron said: “We do not communicate from one leader to another on these issues by tweets and letters that we make public.We are not whistleblowers,” he said.

But Downing Street insisted the Prime Minister had no regrets about making public his letter to the French president.

A No 10 spokesman said the proposals had been sent in a “spirit of partnership and co-operation”, adding: “This is about deepening our existing co-operation and the work that is already being done

Mr Macron was irate at between our two countries.” They added: “We have seen the tragedy that happened earlier this week.As the PM said, we need to do more and he has outlined areas in his letter where he believes we can do more to work together.”

Mr Johnson’s proposals for ending the migrant crisis include joint UK-French patrols by border officials along French beaches to stop boats leaving, beginning as early as next week if Paris agreed.

He had also promoted the use of hi-tech sensors and radar to track migrants and people-trafficking gangs, plus joint maritime patrols in each other’s territorial waters as well as airborne surveillance by manned flights and drones.

Mr Johnson also called for talks to begin on an agreement over migrants being returned to France, which could have “an immediate and significant impact” on the flow of people attempting the crossing.

He said the move would be in France’s interest as it would break the business model of criminal gangs running the people-smuggling trade from Normandy.

“This would be the single biggest step we could take together to reduce the draw to Northern France and break the business model of criminal gangs,” he wrote to the president.

French government spokesman Gabriel Attal said that an agreement on returning migrants was “clearly not what we need to solve this problem”.

He said the Prime Minister’s letter “doesn’t correspond at all” with discussions between Mr Johnson and Mr Macron when they spoke on Wednesday. “We are sick of double-speak,” he said.

Bruno Bonnell, an MP from Mr Macron’s En Marche party, said the Prime Minister’s decision to publish his letter was “not fair”, adding: “When you want to open a negotiation, you don’t start by writing publicly,” he said.

“A negotiation needs to be discreet, to be respectful on both sides and finally to reach conclusions that you publish together.”