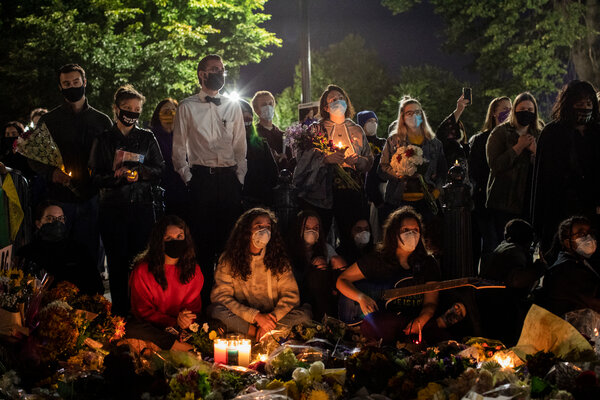 The next justice “will be a woman,” Trump declares, as stage is set for titanic political fight.

The effects the death of Justice Ruth Bader Ginsburg could have on all three branches of the United States government — judicial, executive and legislative — came into sharper focus on Sunday as the battle over how her vacancy should be filled reverberated in the presidential campaign and the pitched battle for control of the Senate.

Even as Americans continued to gather to pay tribute to her — with stirring eulogies often followed by strident calls to preserve her legacy — President Trump vowed to fill her vacant seat “without delay,” and said that he would choose a woman.

“I will be putting forth the nominee next week; it will be a woman,” Mr. Trump told supporters at an outdoor rally at an airport in Fayetteville, N.C. “I actually like women much more than I like men.”

Justice Ginsburg, who is expected to lie in repose at the Supreme Court for two days, said repeatedly before her death that her “most fervent wish” was that she not be replaced before a new president took office. Joseph R. Biden Jr., the Democratic presidential nominee, said that the winner of the election should choose her successor.

But many Republicans would like to act sooner, even as their slim margin in the Senate (which they control 53-47) appeared to narrow, with Senator Susan Collins of Maine saying she was opposed to holding a vote on a nominee before the November election.

Her announcement shifted attention to a small coterie of Republican senators who will be under increasing pressure to take a public position. Shortly before the announcement of Justice Ginsburg’s death, Senator Lisa Murkowski of Alaska told an Alaska radio station that she would not vote to confirm a Supreme Court nominee before Election Day.

On Sunday morning President Trump retweeted an invitation to an event in Alaska with Senator Murkowski with a two-word put-down: “No thanks!”

Democrats, in the meantime, reported raising record amounts of money since the death of Justice Ginsburg. And the striking reversal of Senate Republicans — who refused to even consider President Barack Obama’s choice to fill a Supreme Court vacancy that occurred much farther ahead of Election Day — left them open to charges of hypocrisy.

Mr. Trump’s push to move quickly has already received pledges of support from Senator Mitch McConnell of Kentucky, the majority leader, and Senator Lindsey Graham, who directly contradicted remarks he made in 2016 when he said he would oppose any effort to fill a Supreme Court vacancy during a presidential election year.

Social conservatives and evangelical groups, eager to shift the court decisively to the right on matters like abortion and same-sex marriage, also began mobilizing to push for the speedy confirmation of the person Mr. Trump ultimately nominates to replace Justice Ginsburg.

The fallout from the fight could affect the Senate for years to come.

While Democrats have few tools at their disposal to block a simple majority vote on a Supreme Court nomination given the Republican control of the Senate, Senator Chuck Schumer of New York, the Democratic leader, indicated that they would instead look to retaliate with further institutional changes if Senate control flipped in the November elections.

“Our No. 1 goal must be to communicate the stakes of this Supreme Court fight to the American people,” Mr. Schumer said, according to a Democrat on the call, who disclosed details of a private conversation on condition of anonymity. “Everything Americans value is at stake: health care, protections for pre-existing conditions, women’s rights, gay rights, workers’ rights, labor rights, voting rights, civil rights, climate change and so much else is at risk.”

The emotion of the moment was captured during a candlelight vigil outside the Supreme Court on Saturday.

The American flag flying at half-staff in the background, Senator Elizabeth Warren of Massachusetts told the crowd that they should channel their emotions and fight.

“We are here to grieve, but not to despair,” Ms. Warren said. “There is too much at stake.”

The Trump and Biden campaigns both seize on the fight over the future of the court.

Since spring, the White House has been working on a plan to replace Justice Ginsburg if the opportunity arose. Now, President Trump’s advisers see a fight over the federal courts as an opportunity to jump-start a stumbling campaign.

Those are just a few of the insights into how the Trump team is approaching the momentous struggle to fill the vacancy left by Justice Ginsburg, Peter Baker and Maggie Haberman write.

Mr. Trump, who rolled out a new list of possible Supreme Court picks last week before there was a vacancy, seized the political initiative early Saturday, issuing a thinly veiled warning to any Republicans thinking about delaying a vote until after the November election.

The president rejected suggestions that he should wait to let the winner of the Nov. 3 contest fill the vacancy, much as Mr. McConnell insisted four years ago in blocking President Barack Obama from filling an election-year vacancy on the court.

For the Biden team, the death of Justice Ginsburg represents a challenge of a different sort.

As Shane Goldmacher, Katie Glueck and Thomas Kaplan report, Joseph R. Biden Jr. has spent months condemning President Trump as a failed steward of the nation’s well-being, relentlessly framing the 2020 election as a referendum on the president’s handling of the coronavirus pandemic.

Now, confronted with a moment that many believe will upend the 2020 election, the Biden campaign is sticking to what it believes is a winning strategy. Campaign aides said on Saturday they would seek to link the Supreme Court vacancy to the health emergency gripping the country and the future of health care in America.

While confirmation fights have long centered on hot-button cultural divides like guns and especially abortion, the Biden campaign, at least at the start, plans to focus chiefly on protecting the Affordable Care Act and its popular guarantee of coverage for people with pre-existing conditions.

Battle lines are drawn as the Senate takes the center stage in fight to shape the Supreme Court.

Senator Mitch McConnell of Kentucky, the majority leader, said he would move forward with Mr. Trump’s nominee to replace Justice Ginsburg. But it’s not clear he has enough votes to confirm a new justice just weeks before the presidential election.

“Americans re-elected our majority in 2016 and expanded it in 2018 because we pledged to work with President Trump and support his agenda, particularly his outstanding appointments to the federal judiciary,” Mr. McConnell said in a statement on Friday night. “Once again, we will keep our promise. President Trump’s nominee will receive a vote on the floor of the United States Senate.”

He was notably unclear, however, about the timing, whether he would push for such a vote before the Nov. 3 election or wait until a lame-duck session afterward. Several Republican senators face tough election contests and might balk at appearing to rush a nominee through under such conditions.

The more moderate Republican senators are a small group, and it is not clear whether they could control enough votes to block Mr. Trump’s nominee. Republicans have 53 votes in the Senate to the Democrats’ 47, and Vice President Mike Pence is allowed to break any ties.

Among the Republican members who hold the crucial votes are Senators Susan Collins of Maine, Lisa Murkowski of Alaska and Mitt Romney of Utah.

During an interview on Friday shortly before Justice Ginsburg’s death was announced, Ms. Murkowski told Alaska Public Media that she opposed confirming a new justice before the election. “I would not vote to confirm a Supreme Court nominee,” she said. “We are 50 some days away from an election.”

Senator Cory Gardner of Colorado declined to say on Saturday whether he believed the next president should be allowed to fill the vacancy, as he said in 2016 when President Barack Obama nominated Merrick Garland to fill a vacancy created by the death of Justice Antonin Scalia.

“I hope that before the politics begin — because there will be plenty of time for that — that we have some time for this country to reflect on the legacy of a great woman,” Mr. Gardner said during a candidate’s forum in Colorado.

There was immediate reaction from a few Republican senators calling for a quick confirmation and vote before Election Day.

Senators Martha McSally of Arizona and Kelly Loeffler of Georgia, two other Republican senators facing tough election races, each posted statements to Twitter calling for the Senate to vote on Justice Ginsburg’s replacement.

Still, Republicans expressed initial skepticism on Friday night that Mr. McConnell would find enough votes to confirm a new justice in the weeks before the election.