Political commentator Gerald Warner said First Minister Nicola Sturgeon’s success in the polls could “easily crumble” as he laid bare the cracks which have emerged in the fractured Government. He warned the party was on the brink of “internecine civil war” as Ms Sturgeon grapples with the coronavirus crisis in Scotland and a desperate fight to keep her ranks in order with a push for independence at next year’s Holyrood elections.

Writing for commentary and news site, Reaction, Mr Warner said: “The SNP has indeed been prospering in the polls, it is favourite to win next year’s election and Nicola Sturgeon has harvested a deal of credit for her handling of the pandemic, not based on any actual achievement but by monopolising Scottish television screens daily.

“However, this patina of success and invulnerability could easily crumble.

“It is threatened on two fronts: the first is the unravelling of SNP public policies; the second, and more damaging, is the witches’ cauldron of dissent, hate and revenge boiling just below the surface of SNP politics, with the party in a state of internecine civil war.” 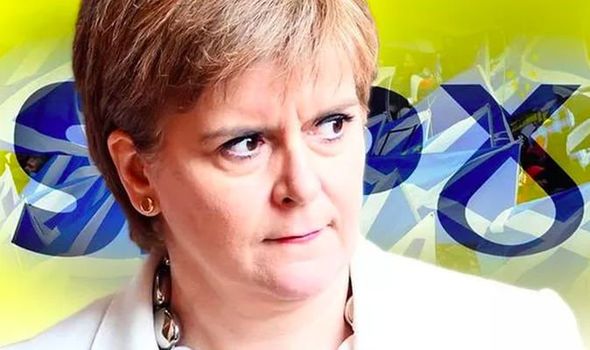 He said Ms Sturgeon’s “incompetence” during the coronavirus university crisis in Scotland would contribute to splits in the party.

But he warned “subterranean internal dissensions” would likely “sink the party”.

Mr Warner said: “Few governments, in the long term, emerge creditably from a pandemic and the SNP is unlikely to prove an exception.

“Yet what is more likely to sink this party, riding so high on the political tide for the time being, is its subterranean internal dissensions.

“Some of those are discernible even at the surface level of policy.”

Ms Sturgeon has been hit by controversy over the past few weeks after the higher education minister admitted the Scottish Government was warned of the possibility of coronavirus outbreaks at universities.

The advice given to the Scottish Government before universities returned told of the “likelihood” of clusters emerging as students got back on campus, but they were not advised to keep young people at home.

In a statement to Holyrood, Richard Lochhead said the Scottish Government had decided to keep campuses closed for part of this academic year “would have inflicted significant harm on them and the wider higher and further education sector in Scotland”.

He also told MSPs that 759 students have tested positive for COVID-19, with that number expected to rise in the coming days, but he was unable to say how many more are self-isolating.

He said: “The advice pointed out the risks and likelihood of COVID outbreaks when the new academic year got under way.

“We were never advised to keep students at home, but we were advised that mitigation factors were vital and we have worked together with colleges, universities, accommodation providers, unions and other key stakeholders throughout this crisis on the safe return of further and higher education.

“Throughout, we have used the best scientific advice available – including from Sage – in helping us make decisions on balancing the risks.”