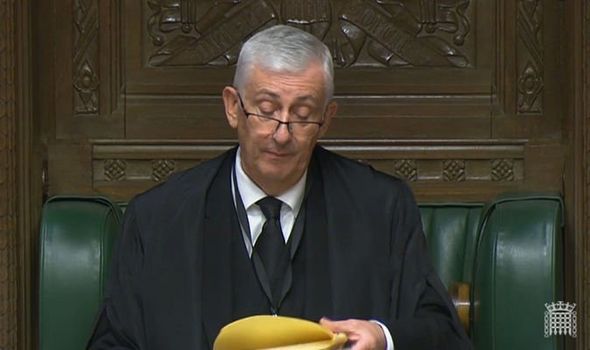 He is set to propose a review of the Commons’ standards procedures after the Owen Paterson scandal. It may look at how MPs are allowed to earn large sums from outside work on top of their £81,932 salary.

It could also lead to MPs found guilty of financial misdemeanours being able to appeal to a retired judge.

A source close to the Speaker said: “He has got to listen to what MPs are saying in tomorrow’s debate before taking decisive action. But he is clear he will have to step in to protect the integrity of parliament if no other solution is forthcoming.”

The review is likely to be set up in consultation with standards committee chairman, the Labour MP Chris Bryant.

MPs are set to clash in a debate today with many likely to vent fury at Boris Johnson’s attempt to use the verdict on Mr Paterson to change the standards system.

Environment Secretary George Eustice yesterday defended the Government, saying it had been trying to give politicians under investigation the right to appeal against findings ‑ rather than protect Mr Paterson.

He told Sky News it was “all a storm in a teacup”. But Labour’s Sir Keir Starmer said: “Instead of upholding standards, the Prime Minister ordered his MPs to protect his mate and rip up the whole system.”

And the Conservatives have been accused of offering Lords seats to rich backers who donate more than £3million and become temporary party treasurer, following a probe by the Sunday Times and Open Democracy.