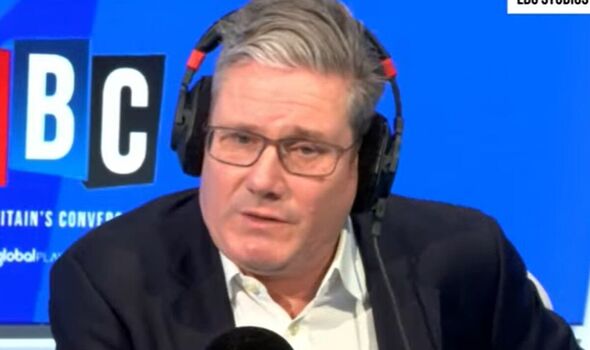 Sir Keir Starmer today dodged a question on whether Prince Harry and Meghan Markle should attend the King’s coronation. The Labour leader was grilled on the issue during a call-in on LBC this morning.

A caller referred to the Duke of Sussex’s bombshell memoir Spare and asked if the Sussexes should be allowed to come to Charles’s coronation at Westminster Abbey in May.

Sir Keir insisted he believed politicians should not “wade in” to royal rifts.

He added that the decision about inviting California-based Harry and Meghan should be up to Charles.

“I think it’s really sad and tragic there are these disputes.

“My view is that we shouldn’t wade in, I don’t think politicians wading in helps.

“Obviously there will come this question in relation to the coronation.

“In the end I think it will probably be down to what the King feels about it and he’ll make his decision.

“But I’m not for wading into these issues. I think once politicians wade in, you have to wade all the way in. I’ve never seen an example where that’s actually helped the situation.”

Host Nick Ferrari pressed: “Given that it’s possibly going to colour the relationship between father and son and there’s every likelihood you’re going to be enjoying regular audiences with the King, don’t you need to know some of the background Sir Keir?”

The Labour leader replied: “Well, probably, and certainly I hope I’ll have regular audiences with the King, that requires us to win the election which I’m utterly focused on.

“I’ve met the King a number of times. If you’re leader of the opposition now it’s not uncommon. I’ve had one-to-ones with the King for 45 minutes.

“He’s passionate about what he believes in, a huge public servant, I’ve got a huge amount of respect for him.

“I would obviously listen to any views he had should that arise.”

It comes after Harry made a series of further revelations about the royals in his tell-all book, which was released earlier this month.

The controversial tome comes after years of tensions between the Sussexes and the Royal Family in the wake of Megxit.

The memoir, which has become the fastest-selling non-fiction book ever, has sparked calls for the couple not to be invited to Charles’s coronation.

The autobiography sees the Duke express his frustration at being the spare to the heir, his anger at the UK media, his unresolved trauma over the death of his mother Princess Diana, his mental health struggles, and the breakdown in family relationships.