Partisan warfare over pandemic lockdowns and mask-wearing is on the wane in Washington: A bitter presidential election has been decided, coronavirus cases are plummeting nationally and vaccines are rolling out slowly but steadily.

Yet in state Capitols, the politicized fights are boiling over.

State lawmakers across the country, most of them Republicans, are moving aggressively to strip the powers of governors, often Democrats, who have taken on extraordinary authority to limit the spread of the virus for nearly a year.

In a kind of rear-guard action, legislatures in more than 30 states are trying to restrict the power of governors to act unilaterally under extended emergencies that have traditionally been declared in brief bursts after floods, tornadoes or similar disasters. Republicans are seeking to harness the widespread fatigue of many Americans toward closed schools, limits on gatherings and mask mandates as a political cudgel to wield against Democrats.

Lawmakers frame the issue as one of checks and balances, arguing that governors gained too much authority over too many aspects of people’s lives. These legislators are demanding a say in how long an emergency can last, and insisting that they be consulted on far-reaching orders like closing schools and businesses.

But governors respond that a pandemic cannot be fought by committee. They say that the same Republicans who politicized the science of the pandemic last year, following former President Donald J. Trump in waging a new battle in the culture wars, should not be trusted with public health.

“Governors have done the right things in trying times and circumstances, and their willingness and courage to do it is exactly why their authority has to remain with them,” said Gov. Andy Beshear of Kentucky, a Democrat who is in a pitched fight with Republicans in the Legislature.

Mr. Beshear went to court this month to block bills by G.O.P. lawmakers — one that would end a governor’s emergency order after 30 days, and another that would effectively make Mr. Beshear’s statewide mask mandate unenforceable. Republicans in the Legislature overrode his vetoes of the bills before he sued.

“The bills filed in Kentucky would eliminate each and every rule or regulation that we have put in place that have proven to be effective in protecting the lives of Kentuckians,” Mr. Beshear said. 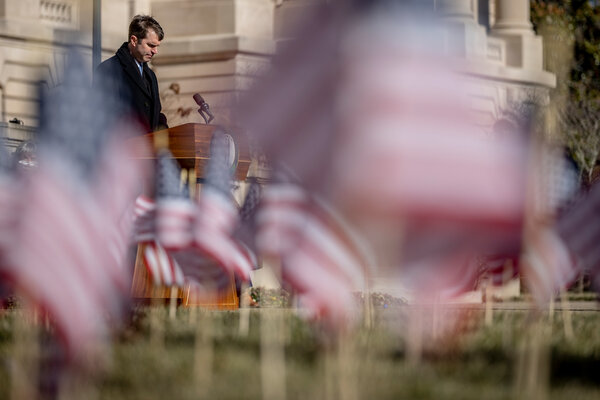 State Senator Damon Thayer, the majority floor leader, rejected the notion that Republicans were moving against the governor because he is a Democrat. He said the once-a-century pandemic had revealed a constitutional imbalance.

“This pandemic has exposed awareness of state governance that gives one person an inordinate amount of power,” he said, adding that the governor had been highhanded in closing bars, restaurants, schools and churches.

The Legislature is weighing a petition calling for the impeachment of the governor for infringing individual rights with his coronavirus restrictions. The State Supreme Court ruled last year that Mr. Beshear had the authority to impose the restrictions.

The coronavirus is not the first time Republican legislators have pushed back at Democratic governors in recent years. After Gov. Roy Cooper of North Carolina was first elected in 2016 and Gov. Tony Evers won election in Wisconsin in 2018, Republicans passed legislation stripping them of some of their powers, actions widely criticized as efforts to undermine the will of voters.

On the other hand, it is not just Republican lawmakers who are seeking to strip powers from Democratic governors. In New York, Democratic leaders of the State Senate are moving to cut back some emergency powers granted last year to Gov. Andrew M. Cuomo, after the governor admitted to withholding data on deaths in nursing homes — a remarkable rebuke of the three-term governor by members of his party.

Republican lawmakers in the majority in Ohio and Idaho have also moved to trim emergency powers wielded by those states’ Republican governors. In some cases, lawmakers have echoed disinformation about the coronavirus. YouTube last week removed video footage of the opening testimony for a bill in the Ohio House that would limit the powers of the governor, after the lawmaker speaking baselessly claimed that no Ohioans under 19 had died of Covid-19.

Last April, when governors in all 50 states declared disaster emergencies for the first time in the country’s history, support for their initial stay-at-home orders to slow the virus’s spread was generally bipartisan.

But that soon evaporated as Mr. Trump, obsessed about the economy in an election year, downplayed the virus. Supporters echoed his dismissal of health experts and defied governors who filled the federal leadership vacuum to manage the pandemic — especially Democratic governors whom the president took to insulting, issuing cries to “liberate” states like Michigan.

In Wisconsin, the Republican-dominated State Supreme Court ruled in May at the request of G.O.P. lawmakers to end the stay-at-home order of Mr. Evers. The governor’s statewide mask mandate is now also before the court, after Republicans in the Legislature voted this month to abolish it. One Republican senator tweeted that the governor was a “dictator.”

“The loudest folks around the state seem to be folks that are very supportive of former President Trump and anti-mask, dismissive of the Covid threat,” said Gordon Hintz, the Democratic minority leader in the Wisconsin State Assembly.

Across the country, lawmakers in 37 states have introduced more than 200 bills or resolutions this year to clip the emergency powers of governors, according to the lobbying firm Stateside, which focuses on state governments.

“It is a fairly large legislative volume for any single policy trend,” said Michael J. Behm, the chief executive of Stateside. “Most of this is about the legislatures trying to reassert their authority after being pushed into the shadows by governors for the last 10 to 11 months during this awful pandemic.”

A number of states would limit a governor’s power to unilaterally declare emergencies to 30 days, after which lawmakers would approve any extension. The 30-day window is in model legislation written by the American Legislative Exchange Council, or ALEC, an influential conservative group funded by businesses.

Most of the bills will die in committees or be vetoed by governors. Only two states, Kentucky and Pennsylvania, have so far enacted significant legislation.

Republicans in Pennsylvania did an end run around the possibility of a veto by the Democratic governor, Tom Wolf, by placing a measure on the statewide ballot in May to amend the state constitution. If it is passed by voters, a governor’s ability to declare a state of emergency would expire after 21 days unless the legislature agrees to extend it.

The measure follows a year in which many Republican lawmakers raged against Mr. Wolf’s handling of the pandemic — including some who questioned the scientific consensus about masks, headlined “Reopen Pennsylvania” protests and defied federal and state guidelines about crowds to appear at Trump campaign rallies.

But Jake Corman, the president pro tem of the State Senate, said the constitutional amendment wasn’t about political payback.

“Ultimately, this is about not allowing any individual — as well intended as I’m sure the governor was — the power to handle all these decisions unilaterally,” he said. “No one ever envisioned governors of any party having this much power in an emergency.”

Mike Brunelle, the governor’s chief of staff, warned that if the constitutional amendment had been in place last year, health outcomes would have been worse in Pennsylvania.

“We know their response to the pandemic and their priorities,” he said of Republicans. “Everything would have been opened up at a very critical time when we needed folks to stay home. That would have led to more deaths and our hospitals would have been overrun.”