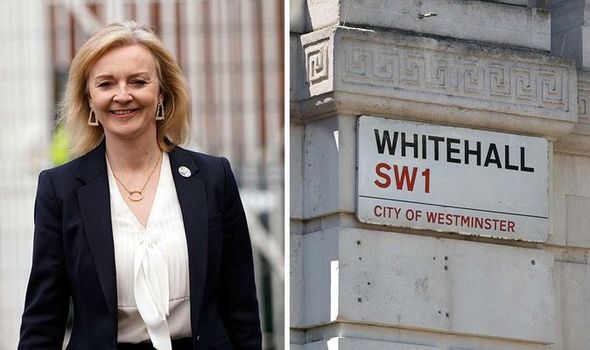 Many civil servants still only come in two days a week instead of returning to their offices in Whitehall even though lockdown ended months ago and many people have returned to work normally. The Sunday Express understands that it is an issue that also concerns the new Foreign Secretary Liz Truss whose efforts of building up the Global Britain brand are being hampered.

One senior diplomat told the Sunday Express: “The problem we have is that it is still very hard to organise face to face meetings.

“They have begun again but a lot of [civil servants] are still working from home and doing the meetings by Zoom.

“It is hard to build up the relationships you need to get things done.

“A lot of the best work is in the informal conversations on the fringes of meetings and you just don’t have those when the meetings take place over Zoom.”

Another senior diplomat from a different embassy added: “Things have started to get better, especially after last year.

“We are struggling though to hold face to face meetings and video conferences are not a satisfactory substitute.

“It is definitely a problem.”

The issue has been exacerbated by the change over of embassy staff which took place last year during the middle of lockdown.

Most of the ambassadors in the UK changed in 2020 along with the other diplomatic staff in their embassies.

This means that embassies and Foreign Commonwealth and Development Office (FCDO) staff have had to start afresh with building relationships.

A source close to Ms Truss said that they were not aware of specific complaints from embassies but added: “I can’t say I’m surprised.”

The controversy has arisen after the cabinet secretary, Simon Case, earlier this month told departments to order as many civil servants as is safely possible back to offices.

It is estimated that 40 percent of jobs which have been relocated out of London have been designated for home working.

But trade unions representing civil servants have been resisting them being forced to return to their offices.

The Association of First Division Civil Servants (FDA) general secretary David Penman has claimed that it is logistically unworkable even after most of his members had the covid vaccine.

He said: “Civil servants are furious at the hypocrisy of the continued attacks on home working from anonymous ministers, who know full well that hybrid working arrangements are critical to delivering the government’s own Places for Growth strategy, a key plank of the levelling up agenda.”

Unions are pressing for a hybrid working solution where most of their members in effect work from home,

Recent adverts for jobs in the Treasury have offered a chance to permanently work from home with the possibility of just two or three days in London.