WASHINGTON — As House Republicans have made the case for ousting Representative Liz Cheney, their No. 3, from their leadership ranks, they have insisted that it is not her repudiation of former President Donald J. Trump’s election lies that they find untenable, but her determination to be vocal about it.

But on Thursday, Representative Elise Stefanik of New York, the Republican whom leaders have anointed as Ms. Cheney’s replacement in waiting, loudly resurrected his false narrative, citing “unprecedented, unconstitutional overreach” by election officials in 2020 and endorsing an audit in Arizona that has become the latest avenue for conservatives to try to cast doubt on the results.

“It is important to stand up for these constitutional issues, and these are questions that are going to have to be answered before we head into the 2022 midterms,” Ms. Stefanik told Stephen K. Bannon, Mr. Trump’s former strategist, in the first of a pair of interviews on Thursday with hard-right acolytes of the former president.

The comments, Ms. Stefanik’s first in public since she announced she was taking on Ms. Cheney, reflected how central the former president’s election lies have become to the Republican Party message, even as its leaders insist they are determined to move beyond them and focus on attacking Democrats as radical, big-spending socialists before the 2022 midterm elections.

Far from staying quiet about the false election claims on Thursday, Ms. Stefanik effectively campaigned on them, describing Mr. Trump on Mr. Bannon’s show as the “strongest supporter of any president when it comes to standing up for the Constitution,” and asserting that Republicans would work with him as “one team.”

“The job of the conference chair is to represent the majority of the House Republicans, and the vast majority of the House Republicans support President Trump, and they support his focus on election integrity and election security,” Ms. Stefanik later told Sebastian Gorka, a former adviser to Mr. Trump. The job, she said in an unmistakable jab at Ms. Cheney, “is not to attack members of the conference and attack President Trump.”

While Ms. Stefanik avoided claiming outright that the election was stolen, she praised the Arizona audit, a Republican-led endeavor that critics in both parties have described as a blow to democratic norms and a political embarrassment, as “incredibly important.” She said recounting votes there and scrutinizing how Pennsylvania and other states administered the 2020 election were “valid, important questions and issues that the American people deserve policy proposals and answers on.”

It was a stark contrast from Ms. Cheney, who has relentlessly upbraided the former president for falsely claiming the election was stolen and on Wednesday beseeched Republican lawmakers in a scathing opinion piece to excise him from the party. Ms. Cheney voted against her party’s efforts to invalidate the election results on Jan. 6, while Ms. Stefanik — like most House Republicans — voted to reject Pennsylvania’s electoral votes for President Biden.

Some Republicans, including the hard-right lawmakers who led a charge to try to remove Ms. Cheney in February after she voted to impeach Mr. Trump, readily conceded that they were unwilling to tolerate dissent from their party leaders.

“All the polling indicates that President Trump is still the titleholder,” Representative Andy Biggs of Arizona, the chairman of the Freedom Caucus, said on Fox News. Ms. Cheney “can tell what her version of the truth is, but she can’t do it as the leader of the Republican Party in Congress.”

For many Republicans, however, the calculation to boot Ms. Cheney, a strict conservative, in favor of Ms. Stefanik, who has a far more moderate voting record but has wholeheartedly embraced Mr. Trump, is more complicated.

In interviews with lawmakers and party operatives, all of whom requested anonymity to discuss the internal turmoil, several expressed concern about the optics of purging the only female member of leadership and a daughter of a conservative dynasty for her resolve to call out Mr. Trump’s lies. They worried that the move to oust Ms. Cheney could spook donors who might chafe at sending money to Republicans so closely associated with the Jan. 6 riot, and ultimately voters who might be alienated by the party’s refusal to brook dissent.

But they were also wrestling with the political downsides of keeping Ms. Cheney in her post, worried that they would continue to be forced to answer for her unyielding broadsides against the myth of a stolen election that many of their voters believe. Several lawmakers privately lamented her stubbornness and said they wished Ms. Cheney would focus solely on attacking Democrats. 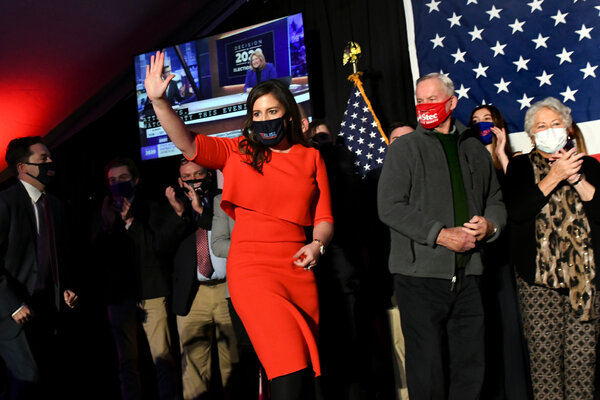 That has been the approach taken by Senator Mitch McConnell, Republican of Kentucky and the minority leader, who was initially vocal in his criticism of Mr. Trump and support of Ms. Cheney, but more recently has refused to broach either subject.

On Thursday, for the second day in a row, he sidestepped questions about Mr. Trump and Ms. Cheney, saying he was solely focused on challenging Mr. Biden and Democrats, and “looking forward — not backward.”

“Members do not want to have to defend themselves against attacks from members of their own leadership team,” said John Feehery, a Republican strategist and former House leadership aide. “The primary job of the House Republican Conference chair is to set up and facilitate the weekly press conferences conducted by the House Republican leadership. If you go out of your way to embarrass your leaders at those press conferences, you are not doing your job and you won’t last in that position very long.”

Representative Ashley Hinson of Iowa, a rising freshman star who voted against her party’s attempt to invalidate the election results, came out on Thursday in support of Ms. Stefanik, saying she respected Ms. Cheney’s “strong conservative record and service to our country” but wanted relief from the infighting that had plagued the conference.

“If Republicans are divided, and not focusing all of our efforts against radical Democrat policies, Speaker Pelosi will remain in power,” Ms. Hinson said in a statement that called Ms. Stefanik “the right person to unify and lead our conference at this time.”

Others appeared torn. Representative Nancy Mace, Republican of South Carolina, who had vocally condemned Mr. Trump for his role in encouraging the attack on the Capitol on Jan. 6 and warned that the Republican Party could not define itself solely around the former president, said she was tired of “having these fights publicly.”

“I want to move forward,” Ms. Mace told Fox Business’s Neil Cavuto. “I want to win back the House in a year and a half. We can get the majority back, and we’ve got to stop fighting with each other in public.”

Ms. Mace warned that if the party continued “to make our party and our country about one person, and not about hard-working Americans in the this country, we’re going to continue to lose elections.” Asked whether she was referring to Mr. Trump or Ms. Cheney, Ms. Mace replied, “All of the above.”

Some arch-conservative Republicans who are eager to oust Ms. Cheney — many of whom have despised her hawkish foreign policy views for years — have been quietly skeptical of Ms. Stefanik despite her endorsement from Mr. Trump, noting the low rankings conservative groups like the Heritage Foundation and American Conservative Union have given her. On Wednesday night, the anti-tax Club for Growth opposed her campaign, branding her “a liberal.”

“House Republicans should find a conservative to lead messaging and win back the House Majority,” the group wrote in a statement on Twitter.

But despite the hand-wringing among the rank-and-file, by Thursday, Ms. Stefanik’s allies, including Representative Jim Jordan of Ohio, one of the founders of the Freedom Caucus, publicly predicted that she would be conference chairwoman as soon as Wednesday, when Republicans plan to meet.