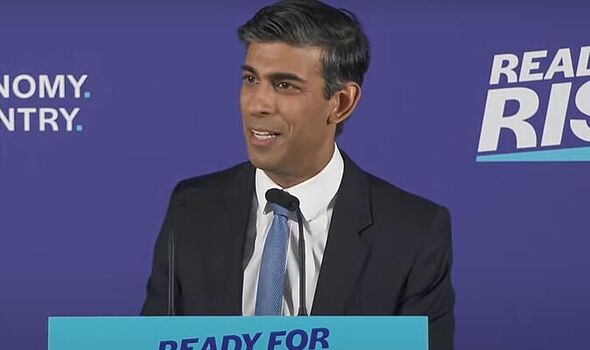 The former Chancellor said it was time for a “grown up conversation” as he launched his leadership bid to take over from the man he brutally brought down last week.

Speaking about his former boss, he said: “Boris Johnson is one of the most remarkable people I have ever met”, adding that he “has a good heart”.

However, he said the Government was “no longer working” leaving him with no choice but to resign.

The resignations from the pair triggered the collapse of Boris Johnson’s Government, forcing the Prime Minister to announce he was stepping down less than 48 hours later.

Mr Suank was quick out of the blocks in announcing his leadership bid, launching a campaign video last Friday lunchtime.

He unveiled a slick logo, video and website as he confirmed he was running to be Prime Minister.

He has not given any media interviews or delivered any speeches since he announced his leadership bid.

And unlike Mr Javid, he did not give a resignation speech in the House of Commons after leaving the Government, making today the first time the former Chancellor has spoken publicly in seven days.

The Richmond MP’s ambitions to lead the Tories have been known in Westminster for months.

There was criticism for Mr Sunak over the weekend after records on the website DomainTools indicated his campaign web address – readyforrishi.com – was registered on December 23, 2021.

Yesterday Mr Javid took a swipe at his colleague’s preparations as he launched his own leadership bid.

He told the gathered media: “I’m not here to polish my backstory, I think many people know it.

“I don’t have a ready-made logo or distinct video ready to go.

“What I do have is a passionate desire to get Britain onto the right course and steer us through the gathering storm.”

Making his pitch today Mr Sunak distanced himself from Mr Javid and the other leadership candidates, who have all pledged to cut taxes on day one in the top job.

Instead, the former resident of No11 said he would only reduce the tax burden once inflation was under control.

“We need a return to traditional Conservative economic values – and that means honesty and responsibility, not fairytales,” he said.

“I have had to make some of the most difficult choices in my life when I was chancellor, in particular how to deal with our debt and borrowing after Covid.

“I have never hidden away from those, and I certainly won’t pretend now that the choices I made, and the things I voted for, were somehow not necessary. Whilst this may be politically inconvenient, it is the truth.

“My message to the party and the country is simple: I have a plan to steer our country through these headwinds. Once we have gripped inflation, I will get the tax burden down. It is a question of ‘when’, not ‘if’.”