WASHINGTON — President Trump, who said there would be so much winning in his White House that Americans would grow tired of it, is of a different mind-set these days. He is not, apparently, tired of losing.

Which is what he and his allies keep doing in their desperate efforts to overturn an election that Mr. Trump did not win.

The president’s win-loss record in court cases alleging election fraud or other irregularities now stands at 2 to 32, according to a tally maintained by Marc Elias, a Democratic election lawyer. Mr. Elias updated his score on Friday afternoon after a court in Nevada rejected a Republican effort to request a new election. Nevada went for Joseph R. Biden Jr.

On Thursday, the president had claimed on Twitter that he had “a very clear and viable path to victory” and that “pieces are very nicely falling into place” for his re-election.

Nobody who has been paying attention to the evidence believed this.

“Working as an engineer throughout my life, I live by the motto that numbers don’t lie,” said Georgia’s secretary of state, Brad Raffensperger, a Republican, at a news conference on Friday. He reiterated this while confirming Mr. Biden’s victory in the state after a hand recount of ballots.

It was merely the latest setback for Mr. Trump, whose helter-skelter effort to reverse Mr. Biden’s victory keeps smashing into the brick walls of ballot math and election law.

“Trump’s legal strategy seems like the product of the same mind that gave us hydroxychloroquine as a Covid cure,” said Ben Ginsberg, the Republican election lawyer who represented George W. Bush in 2000 in his Florida recount dispute with Vice President Al Gore.

Beyond the hard numbers is the scope of the president’s legal debacle and the daily indignities that have been heaped upon his lawyers — or, more accurately, that they have visited upon themselves. On Friday, the conservative website Power Line reported that the president’s lawyers filed documents claiming fraud in Michigan — and then cited townships in Minnesota.

Mr. Trump’s campaign keeps getting routed in case after case. Challenges keep getting tossed out by exasperated judges. Entire legal teams have quit en masse. Claims better suited to random Twitter feeds (or the president’s) have been laughed out of court after court.

One Michigan judge, Cynthia Stephens of the Court of Claims, mocked the Trump campaign’s entire argument this way: “I heard someone else say something,” adding, “Tell me how that is not hearsay.”

Similar episodes have played out across several states and jurisdictions. In a Pennsylvania courtroom on Tuesday, the president’s lead lawyer, Rudolph W. Giuliani, made his first appearance as a lawyer before a federal judge in nearly three decades. The time off showed.

Mr. Giuliani demanded that the judge invalidate nearly seven million votes cast in the state because of what he called “widespread, nationwide voter fraud.” Later, after being pressed for evidence, Mr. Giuliani pivoted rather dramatically: “This is not a fraud case,” he said.

The former New York City mayor took over Mr. Trump’s legal team in part because nearly every other lawyer on the case had either quit or been ignored by the client. It was the latest proof that Mr. Giuliani is willing to do and say pretty much anything on behalf of his client, although not cheaply. He is seeking $20,000 a day from the president’s campaign for his services, multiple people briefed on the matter said. (Mr. Giuliani denied that he had sought the money and added that whoever said he had made the $20,000-a-day request was “a liar, a complete liar.”)

Either way, the lawsuits have kept Mr. Giuliani in his role as a central actor of some of the more farcical episodes of the Trump years, especially in recent days.

At a news conference on Thursday at the Republican National Committee headquarters, Mr. Giuliani unleashed a fire hose of conspiracy theories, false claims and unfounded fraud charges. As he spoke, a dark liquid (seemingly hair dye) streamed down both sides of Mr. Giuliani’s face — a strangely mesmerizing sight that conveyed an impression of a diminished figure melting in plain view.

In a federal courtroom on Tuesday in Williamsport, Pa., Mr. Giuliani asserted that the president had won Pennsylvania’s 20 electoral votes, except that they had been stolen by a “mafia” of Democratic leaders across the state. “The ballots might have been from Mickey Mouse,” he added.

“I have to say, it’s been strange,” said Mark Aronchick, a veteran Philadelphia lawyer who is representing four Pennsylvania counties against the Trump campaign’s challenge. “We have a robust legal system where we’re trained to focus on evidence and precedent. And then you go into a court of law and suddenly Rudy Giuliani is talking like he’s in the driveway of Four Seasons Total Landscaping.” (Four Seasons was the site of a Giuliani news conference on Nov. 7 in Philadelphia, between a crematory and an adult book shop, where the former mayor announced that Mr. Trump would not concede.) 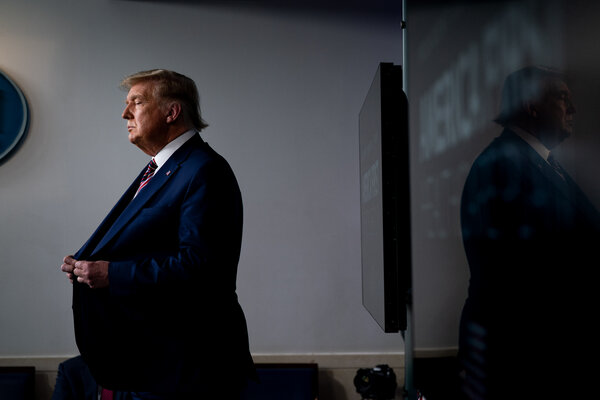 Like Mr. Aronchick, a bipartisan array of lawyers, judges and constitutional scholars have observed this spectacle with a mix of horror and some amusement. “Watching the clown car level of face-palm incompetence here is embarrassing for the participants,” said Justin Levitt, a law professor at Loyola Law School in Los Angeles. He went on to describe the Trump legal team as “keystone cops” whose arguments have been “slapstick stupid.”

His tone was more in sorrow than in anger.

“I’ve had law students that I’ve given a D to in constitutional law that would do a better job in court than Rudy Giuliani,” Mr. Levitt said. “This would all be very funny if it wasn’t so serious.”

Even so, this is, maybe, just a little bit funny. Mr. Ginsberg likened Mr. Trump’s behavior to that of a third-party candidate whose conspiracy theories have zero chance of prevailing in court. “That Donald Trump would end up auditioning to be the Jill Stein of the 2020 cycle,” Mr. Ginsberg said, “with Rudy Giuliani as his apprentice is, I think, quite amusing.”

The gallery of critics has not been confined to legal scholars or the president’s opponents. Mick Mulvaney, one of three former Trump White House chiefs of staff, said in a Fox Business interview that he was “a little concerned about the use of Rudy Giuliani” in the election case. He noted that this was a legal proceeding, not entertainment.

“It strikes me that this is the most important lawsuit in the history of the country, and they’re not using the most well-noted election lawyers,” Mr. Mulvaney said. “This is not a television program.”

In some ways it is, though, at least in the client’s worldview. As has been said on many occasions, Mr. Trump has treated his entire public life — certainly his presidency — as a chaotic and unfolding reality show, and this postelection period has been no different.

He would appear to have no concern for the solemn legal, civic and political leaders who have bemoaned his conduct. “It’s concerning to see not just the president but a lot of other elected officials treating democracy so cavalierly,” said Benjamin Geffen, a staff lawyer at the Public Interest Law Center, who is also involved in the continuing Pennsylvania case against the Trump campaign.

For as much as Mr. Trump has any grand strategy, Mr. Levitt said, it appears less geared to litigation than to public relations. The president’s overriding goal seems to be to simply throw out as many claims as possible, no matter how outlandish or baseless, in an effort to sow public doubt about Mr. Biden’s victory.

Even if this might fail to convince judges or persuade some unlikely amalgam of Republican officials, legislatures and electors to take extraordinary measures on the president’s behalf, it would at least propel a narrative that Mr. Trump has been denied a rightful win.

One of Mr. Trump’s lawyers, Sidney Powell, went so far as to claim this week that the president had in fact won the election “not just by hundreds of thousands of votes, but by millions of votes.” However, she added, votes that were cast for Mr. Trump had been nefariously shifted to Mr. Biden by a software program “designed expressly for that purpose.”

Ms. Powell also said that the C.I.A. had previously ignored complaints about the software. She urged the president to fire Gina Haspel, the C.I.A. director.

As the past four years have shown, Mr. Trump’s say-anything style has been mimicked by his minions, like Ms. Powell, and can prove brutally effective in certain political and media settings. But it has limits in more rigorous and rule-oriented places, like court.

“You’re alleging that the two individual plaintiffs were denied the right to vote,” Judge Matthew W. Brann of the United States District Court for the Middle District of Pennsylvania said Tuesday in Williamsport, addressing Mr. Giuliani. “But at bottom, you’re asking this court to invalidate more than 6.8 million votes, thereby disenfranchising every single voter in the commonwealth. Can you tell me how this result can possibly be justified?”

Mr. Giuliani did not immediately answer. The judge appeared to be losing his patience.