In early 2017, Angelika Kausche was frustrated, demoralized and looking for somewhere — or someone — to help her channel the rage she had recently expressed at the Women’s March.

Then Jon Ossoff appeared. A political newcomer, he announced his congressional bid two weeks before President Trump’s inauguration. He seemed even younger than his 29 years, dressed in suits that might have fit him on his high school graduation day. Liberal mothers in the Georgia suburbs joked that he would make a dream son-in-law, but they settled on him as a symbol of the growing Democratic resistance to the Trump administration.

Ms. Kausche, 58, who taught business communication and lived in the Atlanta suburbs, had never participated in a political campaign since moving to the United States from Germany decades earlier and becoming a citizen in 2011. She had never seen herself as particularly political, always identifying as an independent, a label that didn’t quite describe her liberal views but that was easier to explain in the conservative suburb where she settled with her husband and two sons.

But soon she was joining other suburban women volunteering for Mr. Ossoff’s special election campaign, spending nearly every day organizing her precinct, knocking on doors and planning events in the special election in Georgia’s Sixth Congressional District to replace Tom Price, after he was tapped by Mr. Trump to be secretary of health and human services.

Now, nearly four years later, Ms. Kausche has been involved with Mr. Ossoff’s subsequent campaigns — and several of her own.

“I always tell Jon, it’s all his fault,” said Ms. Kausche, who flipped her traditionally red suburban district when she won a seat in the Georgia House of Representatives in 2018. “Knocking doors for Jon felt like I was doing something to fight back, and in the process, people like me learned how to campaign.”

Much rides on whether Mr. Ossoff wins the race next month, one of two in Georgia that will determine control of the Senate and the scope of Joseph R. Biden Jr.’s early agenda as president. Yet Mr. Ossoff’s bid is also a symbolic coda of the Trump era. His first congressional race helped mobilize a generation of grass-roots activists, offering disheartened progressives a way to channel their fury against the new administration into electoral opposition.

Now, as Mr. Ossoff runs again, the Democratic activism that grew alongside his political career faces its own moment of reckoning: What happens to the anti-Trump movement now that Mr. Trump has been defeated?

Democratic strategists acknowledge it may be a considerable challenge to maintain the enthusiasm that powered their down-ballot wins during the Trump administration. While Mr. Trump lost the White House in 2020, Republicans made gains in Congress and statehouses, indicating that perhaps the suburban revolt against the president didn’t extend to his party.

Already, national Democrats are debating how to keep the fire burning among their party’s base without Mr. Trump at the top of the ticket.

“How hot that energy continues to burn is to be determined,” said Dan Sena, a former executive director of the Democratic Congressional Campaign Committee and a mastermind of the Democratic takeover of the House in 2018. “Politically, I don’t think Democrats will let Donald Trump go away for multiple cycles. There will be a portion of the strategy focused on reminding people of how bad things got.”

Mr. Ossoff frames the predicament in more optimistic terms: “The opportunity that we have is to ensure that this grass-roots political movement that emerged as opposition to Trumpism is nurtured and sustained and grown to stand for a positive vision and a positive policy agenda,” he said in a recent interview.

For the past four years, Mr. Ossoff has ridden a wave of anti-Trump rage. With no previous electoral experience and a short professional record, Mr. Ossoff, a 33-year-old former congressional aide, has been the ideal avatar onto which new liberal activists could project their resistance to Mr. Trump and his allies.

When he began his campaign, Mr. Ossoff became the first federal candidate to leverage that new force in Democratic politics, transforming a typically sleepy special election into a national cultural event.

His first TV advertisements in that race struck at Democrats’ worst fears about the new president.

“He’s not only embarrassing us on the world stage, he could start an unnecessary war,” Mr. Ossoff said while sitting in a control room as a clock counted down from 30 seconds. “We can’t let Donald Trump put us at risk.”

Volunteers, still shellshocked by Mr. Trump’s victory, flocked to Mr. Ossoff’s cause. Essence Johnson, the vice president of a management consulting firm, had just moved to Cobb County from Washington the year before. Ms. Johnson, who canvassed for Mr. Ossoff to drum up support among Black voters, recalled having “candid conversations” about race with the candidate and his team. 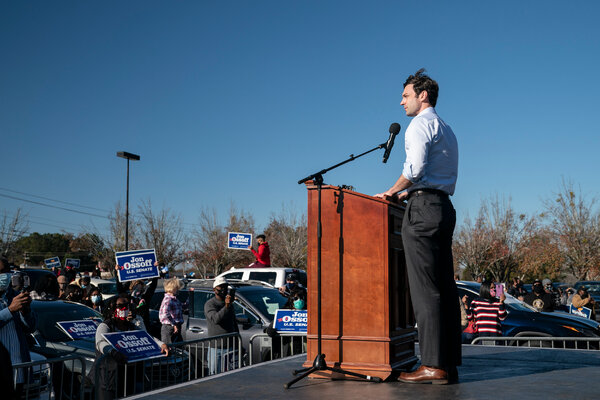 For Elizabeth Snow-Murphy, who moved to the Atlanta suburbs in 2015, the first Ossoff campaign became a valuable training ground for her and other volunteers, many of whom assumed their communities were either politically apathetic or dominated by Republicans.

“We were able to build networks,” said Ms. Snow-Murphy, 38, who works in sales and now helps run a liberal grass-roots organization in the Sixth District. “It motivated a lot of people and mobilized us, but it also trained an entire army of grass-roots volunteers.”

Phone banks to help the effort sprang up from Los Angeles to New York. Alyssa Milano and other celebrities descended on the district and solicited campaign donations on social media. The actor Samuel L. Jackson even cut a radio ad excoriating Mr. Trump that was aired in the district.

Mr. Ossoff’s effort inspired the hundreds of local liberal organizations, largely organized by suburban women, that formed after Mr. Trump’s victory. Many began as private Facebook groups or small wine clubs, with names like the Women of Bus One in suburban Pennsylvania, or GrassRoots Resistance in suburban Ohio, where women shared their dismay over Hillary Clinton’s defeat.

For many of these groups, Mr. Ossoff’s race became an early rallying cry — and an opportunity to open their wallets. The progressive blog Daily Kos calculated that Mr. Trump had won Georgia’s Sixth District by just one percentage point in 2016; in previous years, Republicans had won by double digits there. When Mr. Ossoff announced his campaign with an endorsement from Representative John Lewis, the civil rights leader, Daily Kos endorsed him as well. Within a week, it had raised $400,000 for Mr. Ossoff from its readers — more than it had raised for any candidate in any election cycle up to that point.

“We didn’t know how our community and how progressives in general were feeling,” said David Nir, the Daily Kos political director. “Did the grass roots want to get involved? The answer was there was so much pent-up energy ready to explode.”

At the Democratic Congressional Campaign Committee, Mr. Sena was fending off complaints from the grass-roots organizers, celebrities and the MSNBC host Rachel Maddow, who were criticizing the party for not pouring more resources into a seat Republicans had held since Newt Gingrich, then a little-known history professor who flipped the district, took office in 1979.

The race ended up being the most expensive House race in history, with the majority of Mr. Ossoff’s contributions coming from out-of-state donors.

Even after Mr. Ossoff lost, the energy continued in Georgia, as white suburbanites flocked to take on some of the political work Black women had been doing for decades in the state. In 2018, Stacey Abrams came closer to the governor’s mansion than any Democrat in decades. Representative Lucy McBath won the Sixth District, claiming for Democrats the seat that escaped Mr. Ossoff. And two years later, the shift in the Atlanta suburbs helped Mr. Biden win the state, flipping Georgia for the first time since 1992.

Ms. Johnson mounted her own race, challenging an incumbent Republican state representative who had gone unopposed since 2010. She lost, but wound up as the first vice chair of the Cobb County Democratic Party, which this year elected the county’s first Black sheriff, district attorney and commission chair.

Now Ms. Johnson is worried that, after Mr. Biden’s election, Democratic enthusiasm will drop off for Mr. Ossoff’s runoff election on Jan. 5 and for elections beyond.

In Georgia, the organizations created during the Trump administration say they are now looking to the future: an incoming Republican legislature eager to push measures limiting voting access, municipal contests in 2021 and the expected rematch between Gov. Brian Kemp, a Republican, and Ms. Abrams in 2022.

Tamara Stevens, who helped start the progressive grass-roots organization No Safe Seats, said her group planned to expand its work beyond electoral victories into social justice initiatives, like its seminars for “nice white ladies” to learn about white privilege and the importance of lifting up marginalized voices.

Reflecting on her experience on Mr. Ossoff’s first campaign, Ms. Stevens, 50, said she was ashamed at how little she understood about communities of color even as she was trying to reach their voters.

“White women didn’t come in here with our pink pussy hats and our rally signs and save the day — not at all,” said Ms. Stevens, who runs a construction company with her husband. “We’ve got the amazing Stacey Abrams and so many other Black women that have been such role models and taught some of us that are just getting into politics.”

Ms. Snow-Murphy, now the executive administrator of a local organization focused on keeping the Sixth District in Democratic hands, recently presented Mr. Ossoff with a gift: a hammock embroidered with the words “thanks for building the base camp.”

The present was meant to underscore how much Mr. Ossoff’s campaign had helped build the Democratic infrastructure that flipped Georgia. But it also spoke to what had changed for her and her fellow suburban activists — a hammock, an accessory for backyard leisure time, presented to the man they say changed how they spend their own leisure time. Or, rather, who seriously cut into it.