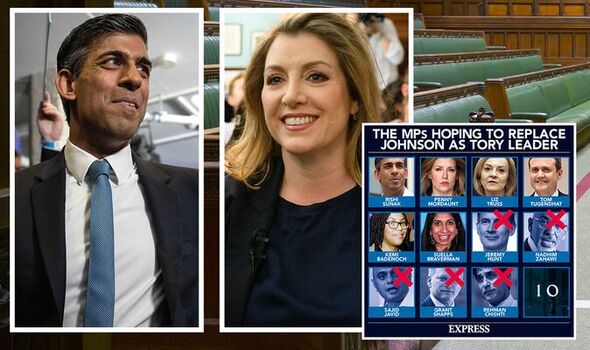 Claims are being hurled by rival camps at one another as the eight candidates in the race jostle to win support from their colleagues.

Rishi Sunak, Liz Truss, Tom Tugendhat, Kemi Badenoch, Penny Mordaunt, Jeremy Hunt, Nadhim Zahawi and Suella Braverman all made it into the first knock-out round of voting today after securing necessary the 20 nominations from fellow MPs to formally enter the contest.

Sajid Javid, Grant Shapps, and the little-known Rehman Chishti all failed to make it onto the ballot paper.

Blue-on-blue fighting has now broken out despite those in the running to be the next Conservative leader publicly saying they despise mudslinging.

Brexit Opportunities minister Jacob Rees-Mogg and Nadine Dorries stunned many of their colleagues last night after launching into a full-blown assault on the frontrunner, Rishi Sunak.

The loyalists to Mr Johnson announced they were backing Foreign Secretary Liz Truss in a bid to keep Mr Sunak out of office.

Mr Rees-Mogg blasted the Richmond MP for raising tax to “socialist” levels and “squandering” the Conservative party’s reputation on the economy.

Meanwhile, Culture Secretary Nadine Dorries accused the former Chancellor’s team of “dirty tricks” after claims that one of his supporters – ex-chief whip Gavin Williamson – had been trying to “syphon off” votes for Mr Hunt so he would make it to the final run-off with Mr Sunak.

Mr Hunt hit back at the claims last night, warning it was a “very dangerous game to play” to start levelling unfounded claims against each other.

Mr Hunt gave his own brutal assessment of Mr Sunak last night, accusing him of having left the UK “heading into recession, and we’ll be there for too long”.

He told LBC radio last night he was “very worried” by his colleague’s economic management when he was in No11 adding: “The thing that struck me was this slashing of the growth forecast for next year.”

Mr Sunak was not alone in facing attacks, with one Tory mocking Mr Hunt as they accused him of desperately pledging jobs to MPs in a frantic bid to keep in the race.

When Mr Sunak gave the first speech of his leadership campaign yesterday, he vowed to run a “positive campaign” and said he would not “engage in the negativity you have seen and read in the media”.

He also defended Mr Johnson saying that while he was “flawed”, he had a “good heart”.

Speaking about the Prime Minister, whose downfall was partially triggered by Mr Sunak’s resignation, the leadership candidate said: “I will have no part in a rewriting of history that seeks to demonise Boris, exaggerate his faults or deny his efforts.”