Northern Ireland is a 'priority issue' for US says expert

The Prime Minister will hold face to face talks with US President Joe Biden on Wednesday but said she does not expect to secure a free trade agreement for years. 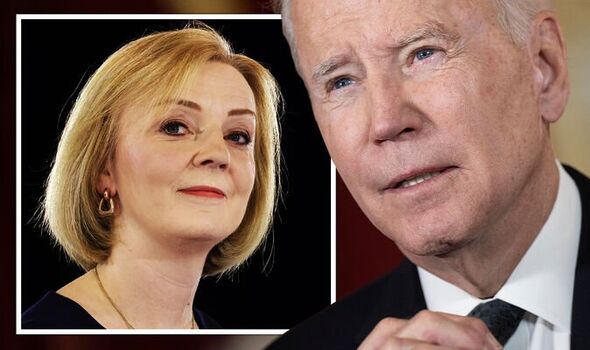 A Government insider said the Democrat president has shown no interest in reaching deals with any country since he took office.

The source revealed there is also a concern that trying to reach an agreement now would be held over the UK like the “Sword of Damocles” while it is trying to resolve tensions in Northern Ireland caused by the EU’s hardline border checks.

Mr Biden, who has Irish ancestry, has repeatedly sided with Brussels to warn the UK against ripping up the Brexit rules causing tensions in Belfast.

But former UN ambassador Nikki Haley told the President earlier this year that Brexit was none of his business and it is not the United States’ place to be “weighing in on this at all”.

Over recent months, the government has instead been in talks to reach state by state deals in the US to increase the £203 billion trading relationship.

The group of 11 countries, which includes New Zealand and Australia as well as Canada, Japan and Singapore, contains half a billion people and has a £9 trillion GDP.

Ms Truss sees the area as increasingly important in terms of defence and security and membership does not require the UK to give up control over its own borders.

The Prime Minister said she is also focusing on sealing a deal with India and deepening ties with GCC Gulf states, which include Saudi Arabia, Bahrain, Kuwait, Oman, Qatar and the United Arab Emirates.

The Prime Minister and president are expected to hold lengthy talks on the sidelines of the United Nations General Assembly in New York.

Ms Truss said: “The number one issue is global security and making sure that we are able to collectively deal with Russian aggression and ensuring that Ukraine prevails and that Putin doesn’t have success in Ukraine.

“That is a huge priority for European security as well as ensuring that we are working together with other members of the G7 to make sure we are not strategically dependent on authoritarian regimes.

“There aren’t currently any negotiations taking place with the US and I don’t have an expectation that those are going to start in the short to medium term.”