Donald J. Trump’s efforts to politicize the law enforcement system have now become his shield as he tries to deflect accusations of wrongdoing. 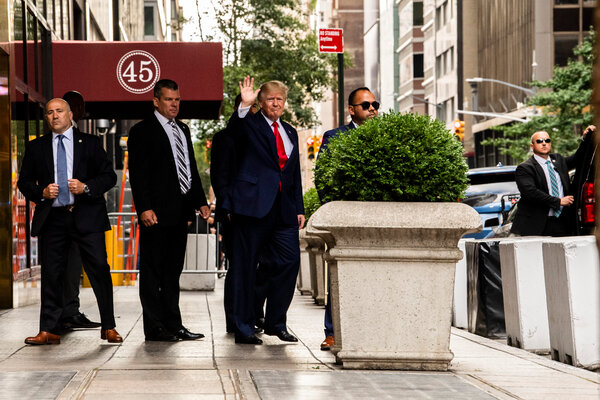 The younger Mr. Trump did not explain in the text he sent why it was necessary to oust Christopher A. Wray, the F.B.I. director his father himself had appointed more than three years earlier. He did not have to. Everyone understood. Mr. Wray, in the view of the Trump family and its followers, was not personally loyal enough to the departing president.

Throughout his four years in the White House, Mr. Trump tried to turn the nation’s law enforcement apparatus into an instrument of political power to carry out his wishes. Now as the F.B.I. under Mr. Wray has executed an unprecedented search warrant at the former president’s Florida home, Mr. Trump is accusing the nation’s justice system of being exactly what he tried to turn it into: a political weapon for a president, just not for him.

His efforts to politicize the law enforcement system have now become his shield to try to deflect accusations of wrongdoing. Just as he asserted on Monday that the F.B.I. search was political persecution, he made the same claim on Wednesday about the New York attorney general’s unrelated investigation of his business practices as he invoked his Fifth Amendment right to avoid testifying because his answers could incriminate him.

“Now to flip the script and falsely claim that he’s the victim of the exact same tactics that he once deployed is just the rankest hypocrisy,” said Norman L. Eisen, who served as special counsel to the House Judiciary Committee during the first Trump impeachment. “But consistency, logic, evidence, truth — those are always the first to go by the board when a democracy comes under assault from within.”

Mr. Trump’s Republican allies argue that he was not the one who undercut the apolitical tradition of the F.B.I. and law enforcement, or at least he was not the first to do so. Instead, they maintain, the system was corrupted by the bureau’s leadership and even members of the Obama administration when Mr. Trump and his campaign were investigated for possible collusion with Russia during the 2016 campaign, an inquiry that ended with no charges of conspiracy with Moscow.

The former president’s camp has long pointed to text messages between a pair of F.B.I. officials that sharply criticized Mr. Trump during that campaign and to surveillance warrants obtained against an adviser to Mr. Trump that were later deemed unjustified. The Justice Department acknowledged the warrants were flawed, and an inspector general faulted the F.B.I. officials for their texts. But the inspector general found nothing to conclude that anyone had tried to harm Mr. Trump out of political bias.

In a letter to Mr. Wray on Wednesday, Senator Marco Rubio of Florida, the top Republican on the Senate Intelligence Committee, alluded to the history of the F.B.I.’s previous investigation of Mr. Trump to cast doubt on the current inquiry that led to Monday’s search for classified documents that the former president may have improperly taken when he left office.

“The F.B.I.’s actions, less than three months from the upcoming elections, are doing more to erode public trust in our government institutions, the electoral process and the rule of law in the U.S. than the Russian Federation or any other foreign adversary,” Mr. Rubio said in the letter.

The search was approved by a magistrate judge and high-level law enforcement officials required to meet a high level of proof of possible crimes. Attorney General Merrick B. Garland, himself a former appeals court judge who was appointed by Mr. Biden with bipartisan support and whose caution in pursuing the former president until now had generated criticism from liberals, has offered no public explanation so far.

The degree to which Mr. Trump has succeeded in promoting his view of a politicized law enforcement system was evident in the hours after the F.B.I. search on Monday when many Republicans, including Representative Kevin McCarthy of California, the House minority leader, wasted little time assailing the bureau’s action as partisan without waiting to find out what it was based on or what it turned up.

Numerous inquiries. Since Donald J. Trump left office, the former president has been facing several different civil and criminal investigations across the country into his business dealings and political activities. Here is a look at some notable cases:

Classified documents inquiry. The F.B.I. search of Mr. Trump’s Florida home appears to be related to a Justice Department investigation into his handling of classified materials. The inquiry is focused on the discovery by the National Archives that Mr. Trump had taken 15 boxes of documents from the White House to Mar-a-Lago when he left office.

Jan. 6 investigations. In a series of public hearings, the House select committee investigating the Jan. 6 attack laid out a powerful account of Mr. Trump’s efforts to overturn the 2020 election. This evidence could allow federal prosecutors, who are conducting a parallel criminal investigation, to indict Mr. Trump.

Georgia election interference case. Mr. Trump himself is under scrutiny in Georgia, where the district attorney of Fulton County has been investigating whether he and others criminally interfered with the 2020 election in the state. This case could pose the most immediate legal peril for the former president and his associates.

Manhattan criminal case. The Manhattan district attorney’s office has been investigating whether Mr. Trump or his family business, the Trump Organization, intentionally submitted false property values to potential lenders. But the inquiry faded from view after signs emerged that Mr. Trump will not be indicted.

New York State civil inquiry. The New York attorney general’s office is conducting its own civil inquiry into some of the same conduct as the Manhattan district attorney’s investigation. The case is focused on whether Mr. Trump’s statements about the value of his assets were part of a pattern of fraud or were simply Trumpian showmanship.

Even Republicans who have been critical of the former president in the past felt compelled to challenge the validity of the search. Senator Mitch McConnell of Kentucky, the minority leader who excoriated Mr. Trump for his role in the Jan. 6 attack on Congress, waited 24 hours but finally spoke out on Tuesday to question whether something untoward had happened.