Facing serious legal peril in the documents investigation, the former president has turned to his old playbook of painting himself as persecuted amid legal and political stumbles. 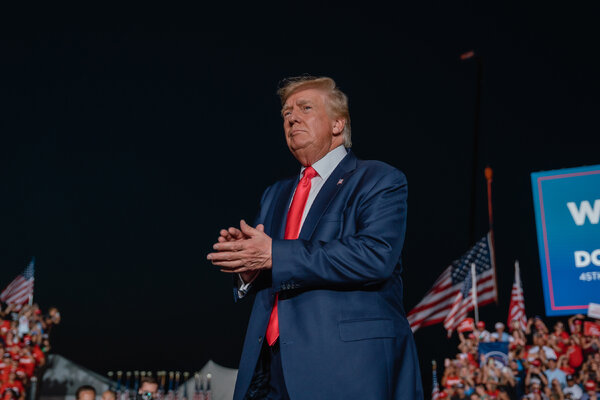 On Tuesday, a Florida judge informed two lawyers representing former President Donald J. Trump, neither of them licensed in the state, that they had bungled routine paperwork to take part in a suit filed following the F.B.I.’s search this month of Mr. Trump’s Mar-a-Lago home and private club.

“A sample motion can be found on the Court’s website,” the judge instructed them in her order.

Mr. Trump has projected his usual bravado, and raised millions of dollars online from outraged supporters, since federal agents descended on the property more than two weeks ago and carted off boxloads of material including highly classified documents. But something is different this time — and the errant court filing offered a glimpse into the confusion and uncertainty the investigation has exposed inside Mr. Trump’s camp.

The documents investigation represents the greatest legal threat Mr. Trump has faced in years, and he is going into the battle shorn of the protective infrastructure and constitutional armor of the presidency. After years of burning through lawyers, he has struggled to hire new ones, and has a small group of lawyers of varying experience.

He is facing a Justice Department he no longer controls, run by a by-the-book attorney general, Merrick B. Garland, who has pursued various investigations into Mr. Trump methodically and quietly.

Mr. Trump is serving as his own communications director and strategic adviser, seeking tactical political and in-the-moment public relations victories, sometimes at the risk of stumbling into substantive legal missteps.

One example came late on Monday, when a conservative writer allied with Mr. Trump made public a letter that the National Archives had sent to Mr. Trump’s legal team in May. Spun by Mr. Trump and his allies as evidence that President Biden had played a role in the case after saying he was not involved, the letter confirmed information damaging to the former president’s case, including that Mr. Trump had retained more than 700 pages of documents with classification markings, including some at the most restricted level.

Then, hours after informing Mr. Trump’s lawyers on Tuesday about one basic mistake they had made, the judge handling their request for the appointment of a special master to review the documents seized from Mar-a-Lago came back with some pointed questions. Judge Aileen M. Cannon, who was appointed by Mr. Trump, asked the team to respond by Friday about whether she even had jurisdiction to hear Mr. Trump’s request, and what precisely his motion was asking her to do.

But as has become standard operating practice in Mr. Trump’s world, the primary focus there is not about legal claims, or even political ones, but the state of mind of the man at the center of the crisis. He feels other people’s actions toward him haven’t gotten enough attention, some of his advisers say privately, regardless of whether the facts actually bear out his grievances.

“The Democrats have spent seven years fabricating hoaxes and witch hunts against President Trump, and the recent unprecedented and unnecessary raid is just another example of exactly that,” Taylor Budowich, a spokesman for Mr. Trump, said.

For years, Mr. Trump operated from a playbook taught to him in the 1970s by Roy M. Cohn, the ruthless former federal prosecutor and aide to Senator Joseph McCarthy who represented Mr. Trump early in Mr. Trump’s career.

That approach — demonize investigators, intimidate allies to keep them from straying, paint himself as persecuted and depict every criticism as a political witch hunt — was Mr. Trump’s go-to strategy to discredit the investigation into his 2016 campaign’s possible ties to Russia, and in his first impeachment trial.

Yet at the time, he had the lawyers in the White House Counsel’s Office helping to guide him, and a team of experienced legal hands familiar with Washington.

More on the F.B.I. Search of Mar-a-Lago and Other Trump Investigations

Now, as in the days after he lost the 2020 election, Mr. Trump is relying on an ad hoc team of advisers with varying levels of experience and judgment, and trying to use his political support as both a shield and a weapon to be aimed at the people investigating him.