The White House that President Trump woke up in on Tuesday morning was in full-blown chaos, even by the standards of the havoc of the Trump era.

Aides said the president’s voice was stronger after his return from the hospital Monday night, but at times he still sounded as if he was trying to catch air. The West Wing was mostly empty, cleared of advisers who were out sick with the coronavirus themselves or told to work from home rather than in the capital’s most famous virus hot spot. Staff members in the White House residence were in full personal protective equipment, including yellow gowns, surgical masks and disposable protective eye covers.

Four more White House officials tested positive, including Stephen Miller, a top adviser to Mr. Trump, bringing to 14 the number of people carrying the virus at the White House or in the president’s close circle. Mr. Trump, diagnosed with Covid-19 last week, was still livid at his chief of staff, Mark Meadows, whose effort on Saturday to tamp down the rosy portrait of Mr. Trump’s condition given to reporters by his chief doctor was caught on camera. Other officials were angry with Mr. Meadows for not even trying to control the president.

Some aides tried to project confidence — “We feel comfortable working here, those of us who are still here,” Alyssa Farah, the White House communications director, said in an interview on Fox News — but many saw the situation as spiraling out of control. The pandemic that Mr. Trump had treated cavalierly for months seemed to have locked its grip on the White House. West Wing aides, shaken by polls showing the president badly trailing Joseph R. Biden Jr., worried that they were living through the final days of the Trump administration. 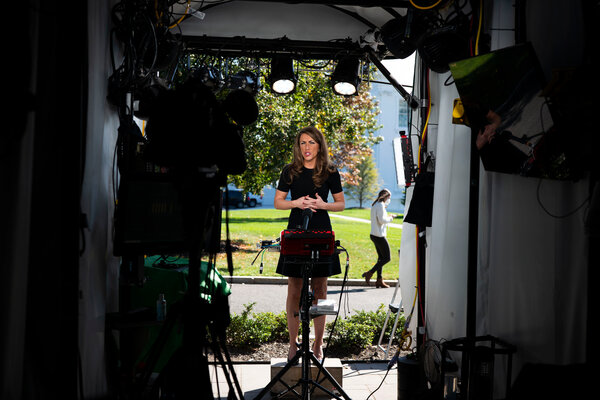 The disarray was at the same time spreading across Washington. Almost the entire Joint Chiefs of Staff, including its chairman, Gen. Mark A. Milley, went into quarantine on Tuesday after coming in contact with Adm. Charles W. Ray, the vice commandant of the Coast Guard, who tested positive for the coronavirus. Late in the day, the stock market took a dive when Mr. Trump abruptly called off talks for a congressional coronavirus relief bill after the Fed chair, Jerome H. Powell, said such a stimulus was badly needed.

Some White House staff members wondered whether Mr. Trump’s behavior was spurred by a cocktail of drugs he has been taking to treat the coronavirus, including dexamethasone, a steroid that can cause mood swings and can give a false level of energy and a sense of euphoria.

Staff members said the president was glad to be back in the White House after spending four days and three nights at Walter Reed National Military Medical Center, which aides said made him feel as if he were in a cage. Mr. Meadows and Bobby Peede, the director of the White House advance team, kept him company there for hours and served as a lifeline to the rest of the administration. He summoned another aide, Max Miller, on Sunday to stay with him.

Aides said that Mr. Trump made calls from the White House on Tuesday and roamed the areas of the presidential residence that had been set up for him. Although he was described as itching to get back into the Oval Office and show that he was in charge, a potential live address to the nation was discussed but scrapped in favor of a planned taped one.

Prominent supporters of the administration said Mr. Trump should have stayed at the hospital until he was no longer infectious or should remain confined to his residence.

“When a boss comes down with Covid, whether that boss is the president, a C.E.O., a principal at a school, a union foreman on a shop floor, and the boss shows up for work, it sends a very worrisome message to all of those around the boss,” said Ari Fleischer, a former press secretary to President George W. Bush. “There is a community of people who work in the White House, not just political appointees. A good boss always takes care of his or her employees.”

Still unknown was the exact status of the president’s health. Dr. Sean P. Conley, the White House physician, said on Tuesday that the president “reports no symptoms” of the virus and that his vital signs were stable, but no one at the White House would say what the “expected findings” were on Mr. Trump’s chest X-ray that Dr. Conley had mentioned over the weekend.

There were no answers, either, on when Mr. Trump last tested negative for the virus — a crucial piece of information that the White House and Dr. Conley have refused to answer and would establish the known state of Mr. Trump’s health before the presidential debate last Tuesday or before he attended a fund-raiser in New Jersey on Thursday. The White House first made public that Mr. Trump had tested positive early last Friday.

Two officials maintained that Mr. Trump had been tested before the presidential debate, but the White House has yet to affirm that.

White House officials conceded on Tuesday that there had been an impression created that Mr. Trump was getting tested every day, and a reliance on testing as if it were a curative measure as opposed to a diagnostic.

Yet the president himself was not tested every day, according to two people familiar with the practices. A senior administration official would only say on Tuesday that Mr. Trump was tested “regularly.” Mr. Trump himself told reporters in the White House briefing room in July that “I do take probably on average a test every two days, three days.”

As the day progressed on Tuesday, parts of the White House resembled a hazard zone. Workers dressed in head-to-toe protective suits sanitized common spaces in the West Wing, and staff members were told that the White House residence had hired a “well-being” consultant whom they could speak with anonymously, specifically to focus on mental health concerns.

Kayleigh McEnany, the White House press secretary who tested positive for the virus on Monday, appeared on television from her home. Hope Hicks, Mr. Trump’s close adviser who has also tested positive, had been trying to help with messaging for the videos the president shot at Walter Reed and the remarks on the virus he wanted to make upon his return.

And the finger-pointing continued.

Ms. Hicks had been upset last week that she was being blamed for infecting the president, according to three people who had spoken with her. She had not attended a Rose Garden event announcing Judge Amy Coney Barrett’s nomination to the Supreme Court and had tested positive for the virus on the same day as Mr. Trump and the first lady — making it just as likely that she had contracted the virus from the president.

Among White House advisers, anger grew at Ms. McEnany because her statement announcing her diagnosis appeared to blame Ms. Hicks. There was also frustration from many corners at Mr. Meadows for not doing more to try to protect the staff, a criticism that his defenders said was unfair given the scope of his duties.

On Monday night, some of the staff members still at the White House had gathered to watch Mr. Trump’s return. When he defiantly took off his mask on the Truman Balcony for a made-for-television moment, aides said it was of course a statement. But they also wondered if the face covering was making it harder for the president to breathe.

Either way, some of them shrugged off the message it was sending to tens of millions of Americans about taking the coronavirus seriously.

The sentiment, according to one aide to Mr. Trump, was that “it’s his house.”